How to tell which Dem dreams won't come true 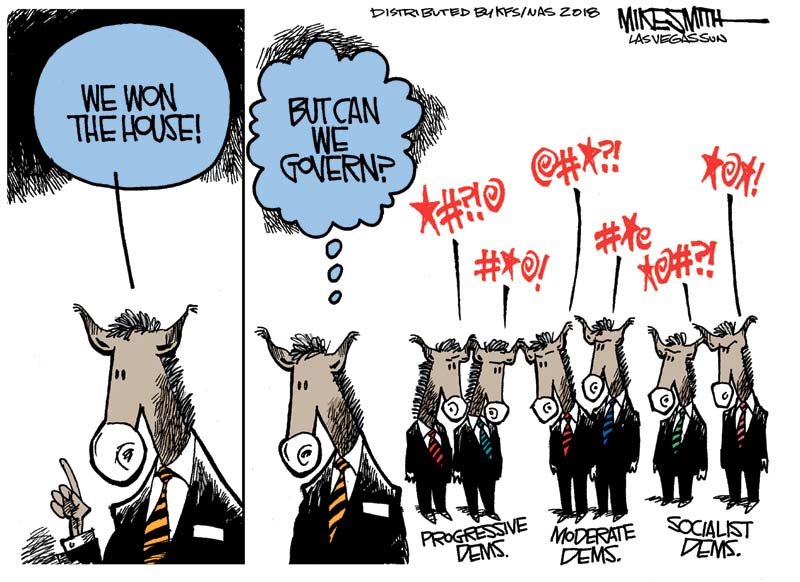 As the Democratic presidential candidates continue to present their various proposals, it is worth keeping in mind a simple but clarifying question: Is this likely to actually happen? I have progressive friends who are looking forward to a new reign of social justice, conservative friends who fear socialism, and cynical friends who predict total gridlock. They're all wrong.

Leave aside for now questions of policy, good or bad. Instead, focus on how the broader trends of U.S. history offer guidance as to which proposals have a realistic chance of being enacted.

First: The major tech companies will end up much more heavily regulated. No such bill is likely to pass right now, but consider some broader questions. Do the general ideological currents favor such additional regulation? (Yes.) Do proposals for such regulation stem from both the right and left, and from both political parties? (Yes.) Have many large U.S. industries or sectors remained so unregulated? (No.)

When the stars are so aligned, more regulation tends to be the result. Don't be surprised if it starts at the state level — another common theme in the past — and then the major companies turn to the federal government for a less cumbersome, more manageable approach.

I also expect consequential antitrust action against some of the major tech companies, as major antitrust suits were brought against both IBM and Microsoft in earlier times. I'm not sure these lawsuits will succeed legally, but they will distract the attention and focus of senior management and thus limit company growth and force a more cautious approach to both privacy and innovation.

A second pattern from U.S. history is that the federal government generally likes to hand out benefits perceived as "free." This dates at least as far back as the establishment of Social Security in the Great Depression, when the initial benefit recipients weren't paying taxes into the system.

I therefore expect federal government action on subsidized child care, preschool programs and paid family leave, all financed by increases in budget deficits rather than higher taxes. Such policies would hand out goodies to millions of families, and appeal to women in particular.

Again, ask the basic questions. Is there "pro-family" rhetoric emanating from both left and right? Yes, whether it is the socialist proposals from Matt Bruenig or paid family leave bills introduced by congressional Republicans. Can you imagine members from both parties claiming these issues as their own? Yes. Is there the possibility of free goodies being handed out? Again, yes, as the national debt held by the public is now over $16 trillion.

Beyond these two major changes, I do not see other proposals going anywhere. There won't be Medicare for All, because many millions of Americans don't want to give up their private health insurance (the Medicaid expansions are likely to proceed, because those seem free). There might be some very watered-down version of a Green New Deal, such as higher subsidies for green energy, funded by deficits. But governments have been moving away, if anything, from carbon taxes, due to their unpopularity with voters. And the notion of government jobs for everybody, on anything but a temporary basis, does not have deep roots in American history.

What about trade and immigration, two issues dear to the heart of President Donald Trump? In those areas I expect to see surprisingly few changes. Fears about China are bipartisan, and with his quest for a market-boosting trade agreement with China, Trump is turning out to be a trade dove, relatively speaking. Meanwhile, on NAFTA, the Democratic-controlled House of Representatives is holding up the renegotiated agreement.

Most important, I don't see the major Democratic presidential candidates making a big public push for Trans-Pacific Partnership, the World Trade Organization or any other trade agreements. The era of greater skepticism about trade and globalization is probably here to stay, and it counts as one of Trump's ideological triumphs.

And immigration? Well, I don't expect our next president to separate arriving children from their parents. But neither do I expect a big breakthrough on immigration policy. Are any of the leading Democratic candidates putting forward a grand immigration plan for public debate? No, even though in other areas they are quite willing to think big. They realize that in terms of intensity, America is moving to the right on immigration — as it did a century ago, leading up to the 1920s restrictions. Count that as at least a half-triumph for Trump.

Broad historical trends matter, and for all of its changes the U.S. retains many of economic and political mechanisms of earlier times. To predict the future, stop obsessing over Senate vote-counting and look at how things have worked in the never-quite-so-distant past. Yes, some critical policies will change. Ten or 15 years from now, however, the U.S. will still be very much a recognizable country.