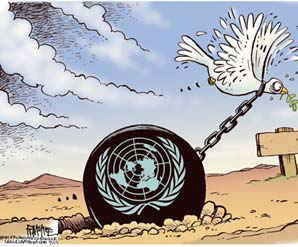 The United Nations plays a supporting role in every war between Hamas and Israel. U.N. spokesmen routinely issue statements, accusations and denials about everyone's conduct, including their own (most recently they had to account for why they returned rockets, discovered in a U.N. school, to Hamas). Israel was denounced worldwide for an "attack" on a U.N. school said to be housing 3,000 civilians, but it was actually an attack on particular terrorists on the adjoining street.

It's time to reconsider the United Nations Relief and Works Agency.

First, what UNRWA isn't. The United Nations High Commission for Refugees provides humanitarian relief for those who flee their homes worldwide. Even the toughest critics of the U.N. would probably agree that this is a valuable function for the international body. But the Palestinians get their own, separate refugee agency: UNRWA.

The UNHCR defines a refugee as someone who "owing to a well-founded fear of being persecuted for reasons of race, religion, nationality, membership of a particular social group or political opinion, is outside the country of his nationality, and is unable ... or ... unwilling to avail himself of the protection of that country." Since its foundation, the UNHCR has helped to resettle some 50 million people.

UNRWA, by contrast, defines a refugee as someone "whose normal place of residence was Palestine between June 1946 and May 1948, who lost both their homes and means of livelihood as a result of the 1948 Arab-Israeli conflict" and their descendants .

When five Arab nations attacked the nascent Jewish state in 1948, refugees flowed in both directions. About a half-million Arabs fled Jewish areas, and about the same number of Jews fled Arab lands. No separate U.N. agency was created to care for Jewish refugees. They were absorbed by Israel. The previous year, after the partition of India, some 14.5 million refugees fled in both directions between India and Pakistan. Their descendants are not, obviously, considered refugees, nor are the descendants of Ugandan, Cypriot, Hungarian, Ethiopian, Sri Lankan, Congolese, Bosnian, Angolan and countless other refugees over the past 60 years.

Imagine if the American loyalists who fled to Canada after our revolution had been supported by an international agency whose charter specified that they and their descendants would remain refugees until they were able to return to an America governed from London?

Though the normal course is for refugee numbers to spike during conflict and then decline with time, because of UNRWA's unique definition, the number of Palestinian refugees has expanded from half a million to more than 5 million.

While UNHCR is currently attempting to serve 50 million refugees, asylum seekers and internally displaced persons, it employs only 7,600 relief workers. UNRWA employs 29,000, only 200 of whom are not Palestinians. The per capita budget of UNRWA, underwritten to a large extent by the U.S., is twice that of UNHCR.

Syria alone has generated 2.5 million refugees in the past three years. Seventy-five thousand refugees have fled Libya since February. The funds used to keep Palestinians in permanent mendicant status are badly needed elsewhere.

Every Palestinian "refugee" is guaranteed a free education up to age 15 courtesy of the United Nations. Controversies have flared from time to time when UNRWA has been accused of using inflammatory textbooks and teaching materials that encourage hatred of Jews and Israelis. Credible reports have shown UNRWA textbooks that feature maps without Israel. UNRWA has hosted summer camps called "Camp Jihad."

There are many reasons for Palestinian intransigence on accepting a two-state solution to their predicament. It was offered three times: first in 1948 with the U.N. partition plan, next in 2000 at the Taba negotiations, and again in 2008 with the Olmert plan. The original refusal to share the land with Jews was a mistake, founded on the belief that the Arab nations could defeat the nascent Israel. But since then the Palestinians have become infantilized by 66 years of victim status. UNRWA has run their schools, clinics, hospitals, banks, construction projects, after-school programs, immunization drives and emergency services.

Egypt, Jordan, Syria, Iraq and Lebanon eventually gave up the fantasy of destroying Israel. Perhaps if the UNRWA umbilical cord were snipped, Palestinians would be readier to face reality as well.