The drive for the perfect child gets a little scary 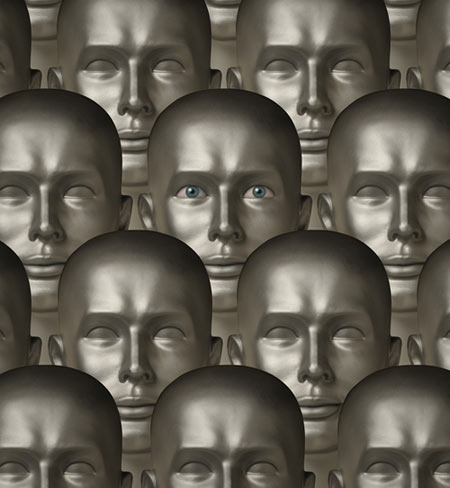 There's a lot of innovation going on in China these days, but perhaps not all of it is good.

Chinese fertility centers are going well beyond American practices, using genetic diagnosis to influence how children conceived through in vitro fertilization will turn out. On one hand, the potential for improving human health is enormous. On the other hand, I am uneasy at the prospect of the power this gives parents. I don't trust people to take so much control over the future of human nature.

Sometimes you hear it argued that the complex nature of genes will prevent major feats of genetic engineering. That may be selling short future advances in Big Data and biomedicine, but even minor changes in genetic diagnosis and selection could have significant effects. Maybe you can't choose to have a child who will be happy, but you might be able to lower the chance of your kid having depression or social anxiety by some small amount. Over the course of generations, that will exert great influence over the nature of the human experience.

One risk, of course, is that parents will opt for some apparently desirable qualities in their children, and then the experiment will backfire, due to unforeseen genetic connections. Maybe we'll get happier kids, but they will be less creative, or less driven, or they might care less about others. Those are valid concerns, especially in these early days of genetic engineering. But I have a deeper worry, namely that things can go badly even when parents get exactly what they want.

If you could directly alter your kids' genetic profile, what would you want? It's hard to know how the social debate would turn out after years of back and forth, but I was dismayed to read one recent research paper by psychologists Rachel M. Latham and Sophie von Stumm. The descriptive title of that work, based on survey evidence, is "Mothers want extraversion over conscientiousness or intelligence for their children." Upon reflection, maybe that isn't so surprising, because parents presumably want children who are fun to spend time with.

Would a more extroverted human race be desirable, all things considered? I genuinely don't know, but at the very least I am concerned. The current mix of human personalities and institutions is a delicate balance which, for all of its flaws, has allowed society to survive and progress. I'm not looking to make a big roll of the dice on this one.

It's also not difficult to imagine parents wanting children who are relatively well-behaved. The same research paper found that mothers, after extroversion, preferred the trait of "agreeableness" in their children, again over both intelligence and conscientiousness.

I was struck by a recent Chinese report that some parents are asking for children who are able to drink socially, for business purposes, and thus trying to avoid some genes that make it difficult to process alcohol. Caveat emptor.

Another risk is that parents may be too risk-averse.

Especially if a family has only one or two kids, there may be a strong tendency to try to "play it safe" in terms of personality traits and cognitive abilities. Yet a greater diversity of human types may serve the greater good and perhaps offer intrinsic value too, by making the world an aesthetically richer and more diverse place. Unfortunately, it's not hard to imagine a world where many parents opt against prospective children labeled, if only statistically, as "too nerdy," "too temperamental" or "too hard-working."

Parents' choices, and their eventual public unveiling, may have harmful effects on social norms. What if it becomes known that a high percentage of parents opted for children with paler skin or straighter hair or a greater chance of being heterosexual? That knowledge could boost stigmas and social divisions, even with stringent anti-discrimination legislation. The parental choices could end up being seen as, in essence, the final court of public opinion.

We might expect that the regulators will say no to the most dangerous applications of genetic engineering, but can we be so sure? The techniques will be available in many different countries, and over time the more lax standards will have greater influence, if only through "genetic engineering tourism." Parents are also a potent voting bloc, and if they really desire such choices, they may end up getting their way.

In China, these techniques are already about one-third as cheap as in the U.S., interest in them is growing rapidly, and there is talk of having them covered by national health insurance programs.

There is plenty of justified worry about greater discrimination these days, but we're hardly talking about the biggest threats.