Black lives matter. As we address racism, we must talk about the unborn ones, too 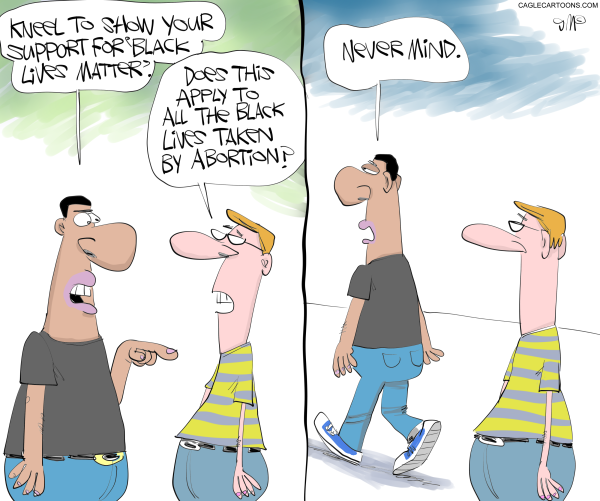 That statement, now ubiquitous, was once controversial because it seemed exclusive.

But in the wake of George Floyd's killing, as the nation grapples with its latest racial reckoning, those words are a reminder that the lives of those historically marginalized have always mattered. They always will.

And we should say so.

What we as a society then do with this realization matters, also.

For one thing, it should compel us to pursue reforms that improve racial equity in policing.

That should include but is not limited to increasing oversight of police departments, demanding transparency in police shootings, reining in police unions and their influence over policy decisions, improving training and protocols with a focus on de-escalation, and prosecuting officers who abuse their power — whatever the race of their victims.

We must also take a hard look at the other public policies, programs and industries that have a disproportionate and deleterious impact on people of color.

That includes what has become the holy grail of contemporary politics: abortion.

If racism in America is difficult to discuss because it makes us uncomfortable, the same is true about abortion and its outsize impact on Black people — born and unborn.

Black people have consistently constituted about 13% of the U.S. population; in 2014, 36% of all abortions were performed on Black women.

As Jason Riley has noted on multiple occasions in the Wall Street Journal, in parts of the country, such as New York City, thousands more black babies are aborted than born alive each year.

Even for abortion advocates, those numbers should be appalling.

Still, proponents of abortion often attribute those data to the reality that Black women are disproportionately poorer than their white counterparts and therefore less able to carry the financial burden of an unplanned pregnancy. But the statistics hold up even when controlling for income. Black unborn of all socioeconomic backgrounds are disproportionately erased from existence.

Black pro-lifers are often treated as if they don't exist, too. Their stories and voices receive short shrift by a media that minimizes their experiences, ignores the diversity of their backgrounds, religious views, political affiliations and goals, and disparages them as tools of the white, conservative right. If you haven't heard from Alveda King, Katrina Jackson, Catherine Davis or Ben Watson, look them up.

There have even been attempts to link the pro-life movement to white supremacy, a narrative as absurd as it is flimsy, given that eugenics (weeding out undesirables) has always been a justification for abortion.

And while Planned Parenthood may not intentionally end more Black lives than white lives, that is indisputably what it does.

We should call it what it is — discriminatory, bigoted, racist.

Before his political ambitions degraded his position on abortion, even the Rev. Jesse Jackson recognized as much. In 1977 he wrote: "If something can be dehumanized through the rhetoric used to describe it, then the major battle has been won. . . . That is why the Constitution called us three-fifths human. â€¦ Those advocates of taking life prior to birth do not call it killing or murder; they call it abortion. They further never talk about aborting a baby because that would imply something human."

It is wrong to see any person as less than human, whether a man on the street, or a baby in the womb.

All of them. The born and the unborn.

That isn't controversial. We shouldn't be afraid to say so.


Previously:
• 06/23/20 Good news: You can be a mask skeptic and still wear one to prevent COVID-19 spread
• 06/16/20 After George Floyd, we must all challenge our assumptions about racism in America
• 06/09/20 George Floyd, good and bad police officers, and the things on which we can all agree
• 06/02/20 A post-coronavirus baby boom seems unlikely. Here's why that's a problem
• 05/26/20 How public health officials created cognitive dissonance, culture war
• 05/18/20 As states start to reopen, be a good neighbor, not a tattletale
• 04/15/20 Abortion is not health care, and amid global coronavirus crisis, it's not 'essential'