Biden-Harris Would Deal a Huge Blow to Religious Liberty 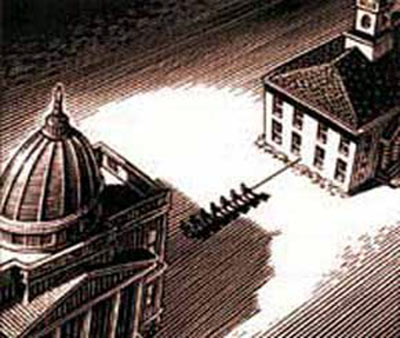 Toward the end of Vice President Mike Pence's resounding defeat of Sen. Kamala Harris in Wednesday night's vice presidential debate, the two officials tussled on the pending Supreme Court nomination of Judge Amy Coney Barrett and the despicable deluge of anti-Catholic bigotry her nomination has unleashed. Harris, one of the leading arsonists during the well-orchestrated 2018 character assassination of then-Supreme Court nominee Judge Brett Kavanaugh, tried to mollify wary voters in advance of Barrett's own impending confirmation hearings. "Joe Biden and I are both people of faith," Harris hectored, "and it's insulting to suggest that we would knock anyone for their faith."

Perhaps Biden and Harris are privately religious; perhaps they are not. It would be rather uncouth to aimlessly speculate as to the personal relationship each has with the Creator. But it is entirely fair game to review their historical records, their past statements and their present platform in order to preview what stances their prospective administration would take on matters pertaining to religious liberty. By any remotely fair standard, a Biden-Harris administration would represent a grievous setback for the constitutionally enshrined religious liberty of all Americans.

At a theoretical level, it has never been clearer that progressivism, the (misnamed) pseudo-intellectual tail that wags the Democratic Party dog, despises religiosity. Modern leftists, political inheritors of Karl Marx's infamous "opiate of the masses" broadside against the Judeo-Christian tradition, are wont to view religion as an atavistic roadblock to full human "enlightenment." They recoil at the notion that an intelligent person can actually believe biblical truth — can actually believe in the divinity of Scripture.

Practically, card-carrying progressives tout religion — anchored as it is in the family and communitarian institutions, such as churches and synagogues — as a destructive hindrance to their political goals of radical autonomy, an expanded welfare state and the ultimate dissolution of the traditional nation-state in favor of global governance. Scratch a Sen. Bernie Sanders supporter enough and you'll assuredly hear such nostrums espoused. On the 21st-century left, such claptrap rules the roost.

A Biden-Harris ticket would support nationally enshrined taxpayer-funded on-demand abortion throughout the entire gestational cycle. Biden, who once pretended to follow the late Mario Cuomo in the Kabuki theater that is, "I'm personally pro-life but support a woman's right to choose," went so far this election cycle as to disavow his decades-long support of the Hyde Amendment — the longstanding federal ban on taxpayer subsidization of that most grisly snuffing out of unborn human life.

Harris has been vocal about her so-called Reproductive Rights Act, which would flip federalism on its head and call for Justice Department "preclearance" before any state-level abortion restriction might be enforced. We have come a long — and murderous — way from the Court's decrees in Roe v. Wade and Planned Parenthood v. Casey, which, while lawless, at least feigned interest in fetal health.

A Biden-Harris administration would be a disaster for conscience protection. They would follow the lead of Barack Obama, who shamefully took a convent of nuns to court for years to try to coerce them to violate their faith and subsidize abortifacients, and aggressively prosecute men and women of faith — the First Amendment and relevant statutory law, such as the Religious Freedom Restoration Act, notwithstanding. Lamentable ordeals like the legal travails of Colorado baker Jack Phillips, owner of Masterpiece Cakeshop, would become ubiquitous. Discriminate, disparate targeting of religious Americans, recently previewed by the noxious COVID-19 scapegoating of the nation's largest Jewish community by Gov. Andrew Cuomo and Mayor Bill de Blasio, offer a harrowing preview of what could be to come.

A Biden-Harris administration would also stack the federal judiciary — at the level of both the Supreme Court and the lower courts — with jurists deeply hostile to conscience rights and deeply committed to the progressive political agenda. Religious liberty has, for years, been a relatively rare bastion of conservative jurisprudential success; witness, for example, the Obama administration's embarrassing 9-0 defeat in the 2012 "ministerial exception" case of Hosanna-Tabor Evangelical Lutheran Church and School v. Equal Employment Opportunity Commission. Biden and Harris are deliberately hiding from the masses any list of possible Supreme Court nominees, and the very nature of that cowardly dissemblance belies the notion that their nominees would be anything other than radical. The blunt truth is that Biden's potential nominees to the (likely "packed") Court, such as Pamela Karlan, would be well to the left of Obama's own reliably liberal nominees.

The Trump administration, despite the morally checkered past of the president himself, has been a deeply loyal and committed friend of religious and traditionalist Americans. It would truly be a shame for that progress — actual progress, in contrast to the false gods of "progressivism" — to now be squandered.