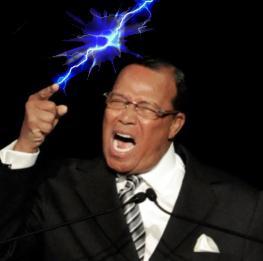 Dr. Ridgely Abdul Mu'min Muhammad, who I will refer to as Dr. Abdul, informed the world of The Honorable Minister Louis Farrakhan's two-and-one-half hour lecture comparing the "suffering of the Palestinian people in Gaza under the ruthless and criminal attack by Israel to our young black men being shot down by police in the streets of America."

This was in answer to my column, "FARRAKHAN MALIGNS FERGUSON," published two weeks ago.

Dr. Abdul whines about Israel and their baby-killing campaign of murder of Palestinian civilians.

It's a total fabrication.

It was Hamas who shot about a thousand rockets intending to kill Israeli children without an Israeli response. When the Jewish State could no longer protect its citizens, including about a million and a half Arab/Muslims/Christians and their families, they fired back. Their targets were rocket launchers and terror tunnels built by Hamas under the border with Israel, opening in kindergartens and residential homes . Israel saved their children, hiding them in bomb shelters and had an iron dome defense. The Hamas psychos you back hooked hysterical five-year-olds to fences outside homes with tunnel openings and missile launchers, most in high-density populated areas.

Further, Israel dropped pamphlets and called homes where suspected launchers, rocket storage and tunnel openings were known. They told the people to evacuate and save themselves. If anything, Israel deserves the Nobel Peace Prize for taking as much effort to save Arab children and other civilians who were intentionally put in danger by Hamas.

Some thoughts on the above:

One more thing on slavery:

It's still occurring on a daily basis. Muslim kidnappers in Sudan, Boko Haram and ISIS are enslaving Christians, Yazidis, Muslims and African Blacks as well as mass murdering and beheading of innocents, including children. WHY DON'T YOU TALK ABOUT THAT!?

Yet, Dr. Abdul was outraged by the response of Breitbart, my column and Hannity's TV interview with an unnamed "…Negro apologist ." The problem is Dr. Abdul doesn't point to anything specific in the pieces, labeling them us "…a pack of trained dogs, staging their attacks" in an "…onslaught ."

As Dr. Abdul warned, I may not be disturbing a single one of Farrakhan's well-coiffed hairs, but I am in his head. What I see is a man frustrated with his own lack of accomplishment to mentor blacks. Things are much worse for blacks than when he started in Islam back in the 50's. There was hope and opportunity back then even with more racism than today.

Now, Minister Farrakhan, you're no better than the other race-baiters, Sharpton, The New Black Panthers, Jackson and the dictator wannabe and murderer of your friend Muammar Gaddafi. This was the man whom you bragged about selecting as the President of the United States, Barack Hussein Obama.

Minister Farrakhan, why did you give up on black people?

Why should I care?

I have friends and relatives, both Jewish and Christian, white and black, who Minister Farrakhan has put in danger with hateful violence-inducing rhetoric. Some of them are in business very close to Ferguson. I also have friends in law enforcement. They are outraged by the rush to judgment of a fellow policeman.

As sad as the shooting death of Michael Brown's death was, at this point it was not a murder by police, as Dr. Abdul falsely stated . I, for one, will make my judgment on the day Wilson is tried if in fact he is charged of a crime , by a jury of his peers.

One more thing: If you want to discuss my column, which you didn't seem to read, Dr. Abdul or Minister Farrakhan, I'd be happy to have you on my radio show so you can point out where I'm wrong—you know, like all those other media types you claim to have crushed.

In the meantime, I'll be waiting like everyone else for justice to be done in Ferguson.