The Dem Party: The Party of Toughs 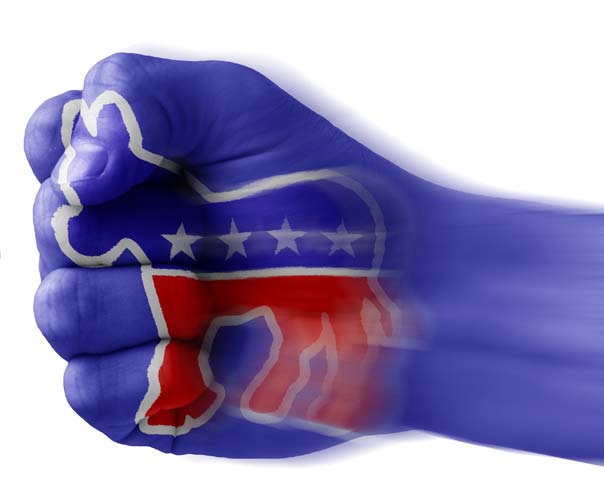 Watch out, Mr. President! You are about to be confronted in the next election by the party of tough guys and, I would assume, tough gals, too.

Remember, Hillary, too, is in the Party of the Jackass, and she throws a mean lamp — particularly if she is aiming it at her husband's head.

You are also facing the party of foul-mouthed tough guys and gals. Be sure you keep your Secret Service detail close to you at all times. I would not even enter the men's room without them. They will understand. They know tough guys when they see them — or they at least know lunatics.

The Democratic Party is no longer the party of pietists such as Jimmy Carter, much less the party of sweet reformers.

My favorite sweet reformer was Eleanor Roosevelt. Well, at least she was a reformer. As for Jimmy, he still teaches Bible class down in Plains, Georgia.

I do not know where Eleanor is right now, but wherever she is, she is doubtless intent on reforming the place and holding forth accordingly.

Frankly, I would rather be with Jimmy and Eleanor than with any of the current crop of tough guys and presumably tough gals now dominating the Democratic Party and seeking its nomination for president.

Of all the remaining candidates (and, admittedly, there are still a lot of them), the former Vice President Joe Biden is obviously the toughest. He is 77 years old, and you have to be pretty tough to still be talking about your prowess with fisticuffs at that age. You would have to be pretty tough if you were even half his age. He really is campaigning across America with his dukes up.

Just the other day, he was campaigning in Iowa and he confronted a man who quite frankly rubbed him the wrong way. The man, who is 83, asked Joe about his son Hunter and the sources of Hunter's wealth in Ukraine. I am told you could see the veins popping out of Joe's neck. He actually raised his voice and snarled at the offender.

Joe chided him about his low IQ. We all know how Joe takes such pride in his own high IQ. When he plagiarizes, he only plagiarizes from the highest quality minds available in the whole world. Remember when he lifted a line or two (oh, maybe it was more than that, but it was not in excess of 100 or so lines) from a British politician who happened to be the head of Britain's Labour Party and, by the way, was in a race to become prime minister? It takes a pretty smart guy to do something like that. Then in Iowa, Joe got physical. He challenged the 83-year-old senior citizen to a round of pushups or situps or shut-ups or what-ups. The news reports got pretty much garbled as the altercation went on, but Joe was really mad, and a lot of laughing could be heard in the background.

Joe, incidentally, has also been known to challenge the president. Back in 2018, he threatened to "take him behind the gym and beat the hell out of him." What gym Joe had in mind remains a mystery. I am not familiar with the gyms Donald hangs around, but perhaps the Secret Service is aware of the gym.

Joe is not known to be a heavy drinker, though, like Hillary, he does take an occasional nip or two, and when the adrenaline is flowing, anything can happen. So maybe he had one drink too many. Recall those photographs of Hillary dangling from a luggage compartment on her campaign plane back in 2016?

I wonder if she ever hung from a luggage compartment on Jeffrey Epstein's airplane when Hillary and Bill were flying on Air Teeny-Bopper down to their friend's ranch in New Mexico before he committed suicide. That is what the tabloids reported last week, and regarding the Clintons, the tabloids have been more accurate than the broadsheets.

But I wander. I was talking about the tendency of Democratic candidates to threaten violence while on the campaign trail. Joe Biden is obviously the most he-man practitioner of the art, but I followed young Beto O'Rourke, and before he pulled out of the race, he showed potential as a pugilist. I wonder if he ever threatened an 80-year-old.

And what about Kamala Harris and Kirsten Gillibrand? They showed their own dexterity with the F-word. Had they not backed out prematurely, they might be shouting back-alley language by now. The tougher gals might even be taking a swing at that 80-plus-year chap out in Iowa.

Election 2020 is going to be a humdinger, and I am still waiting for Hillary. She is even tougher than Joe, and she has broken more furniture and lamps, regardless of her dirty mouth.