Hillary, Here Is What Happened 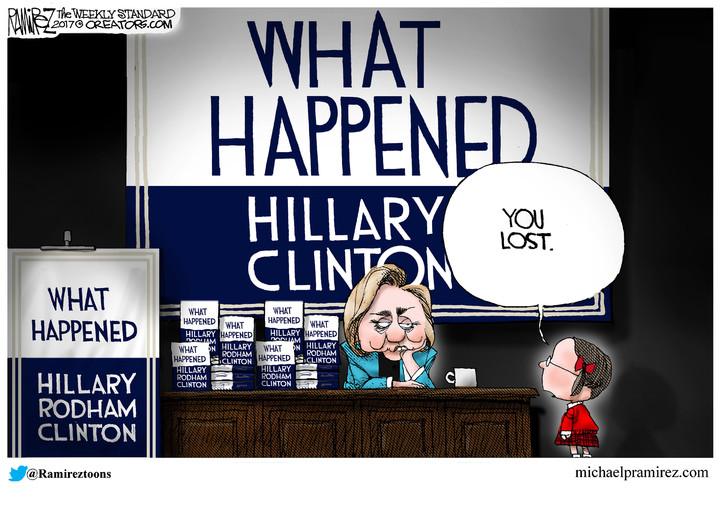 What did I tell you? Late in November of last year, after the presidential election that finally ended Bill and Hillary Clinton's 24-year pursuit of power in Washington, D.C., and diminishment of the Democratic Party, I wrote that they were finished.

I had consulted my sources. What is more, I reported that on election night, Hillary Clinton had a meltdown. That is why she never showed up to thank her supporters who were milling around New York City's Javits Center all night. Few others in the media reported it. Yet now I have more evidence — provided by Clinton herself.

I wrote on Nov. 23: "She reverted to the form that all of us who have covered her for years have been reporting. She screamed, shouted some very unladylike epithets, threw some objects at her servitors' heads and availed herself to more adult beverages than was prudent." Then, I added, "she is scrambling to get a presidential pardon before Congress and various prosecutors move in." She failed to get that pardon, and she'd better pray that Congress and the prosecutors are too busy to move in. Her emails alone constitute a corpus delicti.

On election night, she made a brief late-night call to President-elect Donald Trump. Then she collapsed, my sources said, leaving her campaign chairman, John Podesta, to notify the disappointed throng at Javits Center that she would address them the next day after the votes were verified and, presumably, she had freshened up.

It is all in her latest book, "What Happened," which appeared last week.

I found the book oddly affecting. She is angry. She is blaming everyone for her defeat but herself. Yet in the end, she is reflective, repeatedly turning to scripture and the Lord for answers. She speaks of her newfound humility. She speaks of the guidance of her pastor, Rev. Bill Shillady. He published much of that guidance in a book that was to be the transcendental side of their presumed celebration. It is titled "Strong for a Moment Like This: The Daily Devotions of Hillary Rodham Clinton." Unfortunately, the book turned out to be just another Clintonian fraud. It is full of obvious plagiarisms. Its publisher, Abingdon Press, has recently had to recall it from bookstores and pulp the returned books. Referring to Shillady's work, the president of the publishing house said, "Abingdon Press has zero tolerance for plagiarism." Embarrassing.

At any rate, Clinton's reaction to her defeat in "What Happened" corroborated much of what I wrote last November. "I yelled at the television," she writes. "I nearly threw the remote control at the wall." And she introduces the subject of medication, saying: "Friends advised me on the power of Xanax and raved about their amazing therapists. Doctors told me they'd never prescribed so many antidepressants in their lives. But that wasn't for me." How about a mild sedative accompanied by alcohol, Hillary? That is was what I was hearing in the days after the election.

Then there is this strange passage on "breath work." It reads: "If you've never done alternate nostril breathing, it's worth a try. ... You will feel calmer and more focused." I have heard that Hillary often feels entitled. It's doubtless her supporters feel entitled, too. But for normal Americans living outside her blessed circle, a cautionary note: Remember that sniffing cocaine is still illegal in most parts of America, and, anyway, Hillary did partake of the more common "coping mechanisms." After her discussion on this breathing technique, she admits, "I also drank my share of chardonnay." Might I add whiskey? It is all there in my Nov. 23 column.

The most vacuous chapter of "What Happened" is the chapter titled "Election Night." I turned to it immediately in anticipation of some real excitement.

After all, I had written back in November: "Secret Service officers told at least one source that she began yelling, screaming obscenities, and pounding furniture. She picked up objects and threw them at attendants and staff. She was in an uncontrollable rage." Yet the chapter reveals only that she was "numb," and that when she sat down with her speechwriters to write her concession, "the draft was too combative," so "a spirited discussion ensued."

Oh, come on, Hillary. It has been reported at least since The American Spectator's "Troopergate" stories in the early 1990s that your bad temper is volcanic, your foul mouth is shocking and your throwing arm is at least minor league.

"What Happened" is but another falsification of the Clinton reality, but it has at least one beautiful moment.

On the back of the dust jacket is a picture of an absolutely stunning model sitting in for Hillary. She's very soigne. Who told her? Gentlemen prefer blondes.