Climate Change and the Dems 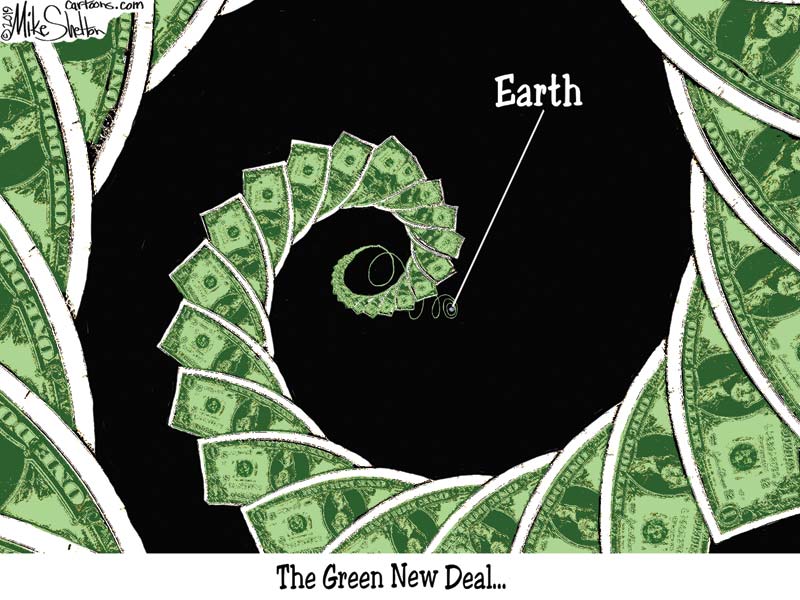 Climate change is one of those issues that the bien-pensants around the world all agree upon. We must act! If we do not act, people will lose their beach houses. Plants will wither and die. Birds will fall from the sky. Just last week, whole communities in the Caribbean were swept away.

There are, however, problems with eliminating or ameliorating climate change. For one thing, modern technology cannot seem to keep up with people's ability to dream. Daydreams outpace technology every time. Dream up a problem such as climate change and I guarantee you it will be years before climate change is solved by technology. Though when I ponder some of the solutions now being offered for climate change, it might be worth the wait.

Consider Congressgirl Alexandria Ocasio-Cortez. She has dreamed up a vast scheme. She calls it the Green New Deal. It envisages all our homes and office buildings, and even factories being revised and rebuilt according to her green code. Others are more moderate. They would only wipe out the commercial airline industry, though the automobile industry could be next. Already there is an ambitious plan afoot in our country to end the life of the plastic straw.

Oh, yes, there is another problem with climate change. It is not a winning issue with the electorate. Any government that attempts this sort of Green Adventure almost immediately falls. I cannot think of a country on Earth whose majority supports climate change legislation. Possibly there is one in the Vatican. We know the pope favors it. Yet I would say that the Vatican is not a conventional democracy.

Last Wednesday, we saw the Democrats' lonely crowd of candidates traipse across a stage for a ghostly pageant hosted by CNN. The network finished dead last in the ratings that night, with the other two cable news channels elbowing it aside. The network's average audience during the seven-hour event (yes, seven-hour!) was a measly 1.1 million viewers, according to The Hill. The topic of the spectacular was climate change. Jeff Zucker, the president of CNN, apparently thought it was the major issue with the Democratic hopefuls, and obviously, they agreed.

Gaffable Joe Biden, Pocahontas, Comrade Bernie Sanders and all the rest arrived on stage Wednesday night to talk about climate change all night long if need be. They compared it to World War II. They compared it to cancer. They blamed it for wars already in progress and wars in the future. One ludicrous comparison was between climate change and overpopulation. The wretched of Africa could be saved by Planned Parenthood's arrival to the Dark Continent, all wearing pith helmets and garb from L.L. Bean.

Frankly, the Democrats' obsession with climate change is more than odd. It is delusional. As The American Spectator's Hunt Lawrence and Daniel J. Flynn wrote in commenting on the Wednesday night revels, health care "matters to voters in a real, tangible way, and not in an abstract sense like climate change." Health care consumes 18 percent of the American budget, trending upward toward 20 percent by mid-decade. Americans now spend $3.5 trillion or so on health care, with the federal, state and local government footing 45% of the bill. How will we pay for it in 2025? The subject was not even discussed last Wednesday by the leading Democratic contenders.

Lawrence and Flynn are putting their money on health care, not climate change, as an issue in 2020.