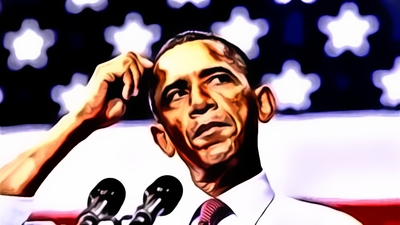 This week I am filing a world exclusive! Remember, you read it here first!

For years I have maintained a team of investigators sedulously trailing our president. They have studied pictures of him. They have inquired of photographers and camera crews who employ both still and video cameras to cover the president. My investigators have interviewed White House journalists, occasionally White House employees and, of course, White House visitors and even tourists. All have been asked the same question: "Have you ever seen the president's shadow?"

Every interviewee who would answer the question has confirmed my suspicion. They have not seen President Barack Obama's shadow. The reason for this curious phenomenon is that he casts no shadow. Despite all the power at his command, he roams the world leaving no shadow. The sun may shine down upon him. A wall of floodlights may illuminate him. Yet beyond his neat and well-tailored physique, he leaves no shadow, no silhouette, nothing. Zilch, as they say. He is that insubstantial. He is a community organizer. He is not a president.

Gertrude Stein is famous for saying, "There is no there there." Well, with Obama things get worse. There is no shadow there. Our 44th president will go down in history as the first American president who left the White House leaving nothing but a vast diapasonal sigh of relief across the nation. Even some of his supporters will be relieved when he is gone.

Oh, there will be wreckage. Our health care system, once the ideal of the world, is in ruins. Fragments of legislation clutter the landscape, such as Dodd-Frank. The national debt was dangerously high when he entered office; now it has more than doubled — if not tripled, according to Rand Paul. Yet nothing substantial or constructive has been achieved. A year after Obama vacates the White House, almost any Republican president working with the Republican Congress will have cleaned up the mess — except for the debt. That will take longer.

In foreign policy, things may be even worse. A nuclear Iran will have to be dealt with. When the president without a shadow leaves office after withdrawing American power from every corner of the world, Americans will see how dangerous a community activist can be in the White House.

So the president will leave wreckage, but he is not going to leave a shadow. He doesn't have one.

Now, reportedly, he has been trying to sabotage Hillary Rodham Clinton's run for the presidency. He has sent Valerie Jarrett out to leak damaging information about her. Clinton apparently sent and received classified information on her personal server, whose backup was a toilet in Colorado. She committed various misdemeanors and felonies. Well, Mr. Shadowless President, you have to do better than that with a slippery lady like Clinton.

Obama seems to realize this, and so last week he came up with a candidate of his own, Vice President Joe Biden. At a press conference, the president's spokesman, the amusingly named Josh Earnest, was asked about the spreading rumors that Biden was going to enter the race. Earnest's response was: "The president has indicated that his view that the decision that he made, I guess seven years ago now, to add Joe Biden to the ticket as his running mate was the smartest decision that he has ever made in politics (italics added). And I think that should give you some sense of the president's view of Vice President Biden's aptitude for the top job (italics added once again)."

Following up, reporter Jonathan Karl asked whether the "president would support Biden if he were to run? And this is obviously, you know, a better decision than the secretary of state that he chose (Clinton)." Earnest answered: "Yeah, it was." No italics necessary.

Now, with her polls sinking across the nation and voters indicating in the Quinnipiac University Poll that they associate her name with words such as "dishonest," "liar" and "untrustworthy," this is about the best news Clinton has had in months. Obama, the president who casts no shadow, is endorsing Biden to be his successor. Nothing to worry about with a Biden candidacy, right, Hillary? Now all Clinton has to worry about is Donald Trump and a dozen or so other Republican candidates. For Clinton, things are looking up.

But remember, you read it first here. Obama casts no shadow!