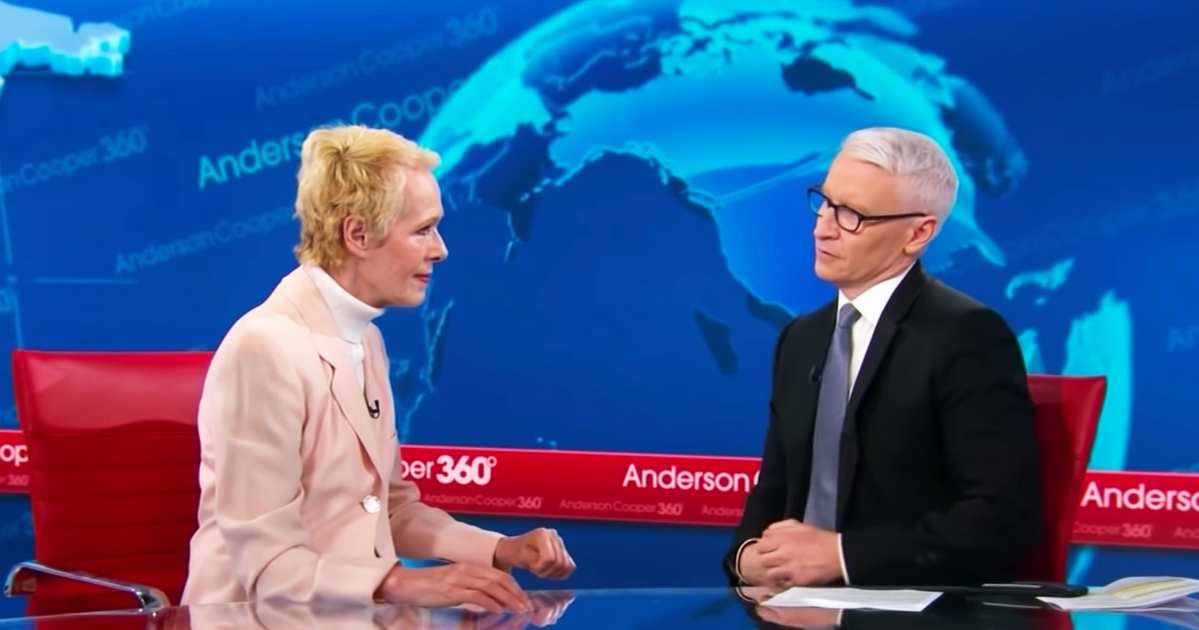 Who put Anderson Cooper in this mess?: CNN host with Trump accuser.

There are a lot of odd stories making the rounds these days. How about the odd stories that E. Jean Carroll has accumulated around her?

Unlike any of the other commentators esteeming her of late, I have known her since the early 1960s; I went to Indiana University with Jean, as she was then called.

She was a cheerleader and hung around the swim team. At some point, apparently in the 1990s, she became a writer and acquired the "E" before her name. Writers from Indiana have been doing that since at least 1967.

Now she has come out with a book, and part of the rollout is to claim that Donald Trump raped her. He denied it and in fact said he never knew her. Well, I have known her, both in the early 1960s and in the 1990s.

Of course, the mainstream media has again gone mad, though Anderson Cooper may have sobered the media up a bit when he interviewed Carroll on his CNN show and questioned her pedestrian reference to being raped in Bergdorf Goodman's department store over 24 years ago, in the busy store's lingerie section.

He attempted to clarify her experience by insisting rape is a "violent assault." To which the alleged victim replied with a weird, expressionless face, "I think most people think of rape as being sexy."

Cooper began a hasty retreat. Carroll went on oblivious as to the discomfort she was causing, saying, "They think of the fantasies." Cooper collapsed into incoherence. Then she added, "You're fascinating to talk to." I thought I heard him say, "Tsk, tsk."

Who put Anderson Cooper in this mess?

Incidentally, E. Jean is 75 years old. Her advice column in a women's magazine was heavily absorbed with sex, and one look at her today would tell most Americans to keep their distance. As I say, there are a lot of odd stories going the rounds.

How about the emergence of electric scooters on the streets of most American cities today? If you have a credit card, you can ride one on the street with cars and trucks all around you. You can also ride your scooter on the sidewalks — it is against the law in some municipalities, but how is a police officer to stop you? The police have more serious infractions to pursue.

Moreover, of a sudden, electric scooters are waiting for their riders on street corners all over the country, and after a rider is finished with his ride he just leaves the vehicle wherever he might be. Possibly he is stopped in the middle of a street. Possibly he is stopped on a busy corner. Scooter drivers just leave scooters wherever they care to discard them. Pedestrians beware.

Few cities have taken the time to regulate where these public nuisances might be left. An increasing number of pedestrians are taking umbrage at the scooters' presence on sidewalks, on street corners, in doorways.

Now the indignados are knocking them over, throwing them in nearby rivers, burning them. I have even heard of them being thrown off buildings. I can sympathize with the anger they arouse.

City governments all over the country have been caught off guard by the sudden onslaught of people whizzing down streets, often two or three abreast. Most cities have been blindsided by this technological prodigy. Laws need to be devised. Laws need to be enforced. And the time for doing this is now, before any more people get killed.

To begin with, some age standards should be established. Licensing is in order for both the drivers and the vehicles. Safety equipment should be required. Headgear should be required. One should not be allowed to breeze down a sidewalk, and when driving a scooter down a street, the driver should stay within his lane and abide by the speed limit. Where there are bike lanes a scooter should do as bicyclists do to stay within the lanes.

Now what does E. Jean Carroll have to do with electric scooters? They both need headgear.