New Faces in the Race 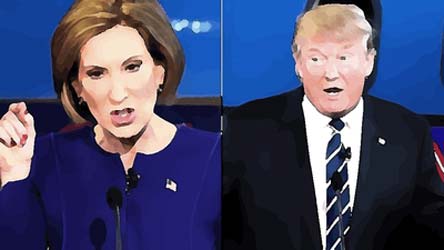 The Republican Party, the political party of commerce (and of jobs!), has two aspiring candidates for the presidential nomination who are drawn from the business community. One evokes unwarranted snoozes; the other, rather astonishingly, evokes derision.

I am speaking of Carly Fiorina of Hewlett-Packard and Donald Trump, the billionaire developer.

Those who offer their expert appraisals of these two candidates are retired politicians, political advisers and pundits. In other words, these appraisals are coming from those who have left the field of political combat for whatever reason, or who have never stood for election yet their assessments of candidates are taken very seriously by journalists, who also have never stood for election. Political commentary is unusual. It is as though the leading culinary critics in the country were all vegetarians, or at least fruitarians.

I could not listen to the anti-Trump diatribes last week without suspecting that I had just listened to the whining of critics consumed with envy. If Trump had only made and lost and made again, say, one billion dollars, would his apparently impecunious critics have shown him more respect? Would their assaults on him have been less personal if he were merely a millionaire rather than a billionaire eight or nine times over?

Yet I will tell you this: Fiorina (if she can get a hearing) and Trump are going to carve out of the electorate a sizable constituency. There are, out there in the electorate, voters who are tired of politics as usual. They think the country is on the wrong track. They are at least mildly conservative and think a straightforward, generally conservative candidate could fix the problems facing America, which range from immigration to foreign policy to economic issues. They think a guy who has made billions knows more about the intricacies of real-life problems than a lifelong politician.

Rush Limbaugh made the point the other day that American young people who grow up in school systems that continue to harangue them about the environment, the health care system, the criminal justice system, guns — all matters that supposedly adults have brought to ruin — are getting a ceaseless message of pessimism about their country. The news media and entertainment culture reinforce this pessimistic message.

When Trump spoke last week about "making our country great again," his message was not lost on his audience. It echoed the message of an American president who cheered us all back in 1984 when he spoke of "Morning in America." Come to think of it, Ronald Reagan entered politics late in life from the world of Hollywood. Why is it so gauche to think Trump could enter politics from the world of commerce?

He has made and lost and made again his fortune with no hint of sleaziness. He prides himself in the art of the deal. Doubtless, his deals have no traces of the unethical behavior of the Clintons. Is there anyone so jaded out there who would not relish a debate between the real estate magnate and Clinton — or, even better, a debate between Donald and Hillary and Bill?

Finally, there is something else to be said for Trump. The critics tell us he suffers from hubris. The Trump I know does not suffer from hubris — self-confidence, yes, but hubris no. He is a successful man and a cheerful one. There is no hint about him of the dark spots the hubristic suffer. Surrounding him are cheerful, hardworking people. His children are especially cheerful and hardworking members of the Trump organization.

In an interview in The American Spectator last year, he said, "One thing that was always important to me with my children is no drugs, no alcohol, no cigarettes. And I used to, from the time they were 2 years old and started understanding words, I would always say no drugs, no alcohol, no cigarettes. I would say it to them loud and clear, and I would say it strongly. To a point where I remember Ivanka once saying, 'Dad, don't say it anymore.' But I would say it, because I have so many friends who have very smart kids, but they got involved in drugs and alcohol and other things, and their kids are a basket case right now." And he added, "Life is tough." But he made clear he had his priorities in order.

Now, of course, his three oldest children help him run the Trump Organization. Ivanka serves as executive vice president. She was there to introduce him the day he declared his candidacy. I predict he is going to run a great race for president. And at the end of the day, when he has had the last laugh, some observers will say he made it a race and one thing more: His children are his greatest monuments. Donald Trump has kept things in perspective.