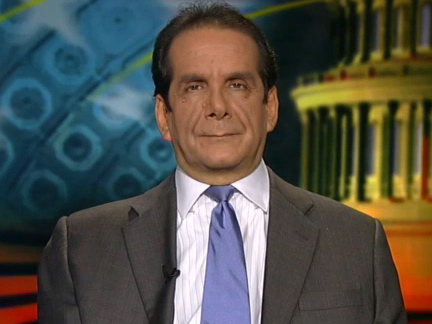 On Friday, Charles Krauthammer, the Pulitzer Prize-winning conservative journalist and writer, released a noble statement to the public. Its final words were: "I leave this life with no regrets. It was a wonderful life — full and complete with the great loves and great endeavors that make it worth living. I am sad to leave to leave, but I leave with the knowledge that I lived the life that I intended."

The 1960s generation has been, for the most part, a dud. It was heralded as the brightest generation since ... since when? I always thought it was the most pampered generation, the most affluent generation (usually through inheritance) and the most self-regarding generation. But there was nothing great about it. At least there was nothing great about its leading lights. It can boast of some great scientists, some great (if flawed) athletes, some captains of industry and finance, but at least in the cultural realm, we have very little to show for all our rave reviews.

Moreover, when you consider all the hype this generation has been awash in since its youth, it never realized its promise. It took over the universities and ruined them; it did the same with the churches and synagogues and politics and society. There are signs that a resistance to the 1960s' spoiled brats has set in, but it is going to take a long time. Ironically, the resistance might be led by one of the most widely reviled and least anticipated leaders of that generation, Donald Trump.

Charles was an early resister. So far as I know, he never said a stupid thing, never an embarrassing thing, never an ignoble or undignified utterance. He had plenty of opportunities. He was a fixture on television talk shows, in books and in the public prints. In those places, all he did was become the most gifted spokesman of his time.

He did not have an easy time of it. A swimming accident early in life left him paralyzed and dependent on a wheelchair. I imagine practically every movement he made was more challenging than almost anything you or I undertake. Yet he was everywhere: in an active public life, at chess games, watching sports events and founding the Pro Musica Hebraica, whose focus is on Jewish classical music.

He began life, as has been true of many of our best intellectuals, as a liberal, an intelligent liberal but a liberal.

He was an editor at The New Republic. I watched him closely in those days. Many liberals showed signs of becoming conservatives then, and I thought Charles would surely make the jump.

Some wandering liberals never did, for instance my friend Pat Moynihan. Pat was almost always interesting but could not make the leap.

Charles did with irony, eloquence, grace and his extensive erudition. He was well-read in many areas, but still I cannot forget his affliction. What a man. He was very tough.

When he announced his illness months ago, I thought it was an illness stemming from his condition of paralysis. He was often felled by such illnesses and always came back. Unfortunately, this time it was cancer. In the ensuing months, he overcame the cancer, but it recurred. In his recent statement, he wrote: "recent tests have revealed that the cancer has returned. ... it is aggressive and spreading rapidly. My doctors tell me their best estimate is that I have only a few weeks left to live. This is the final verdict. My fight is over."

It has been a very long fight, Charles, and you have acquitted yourself magnificently. It is a shame there have not been more like you.