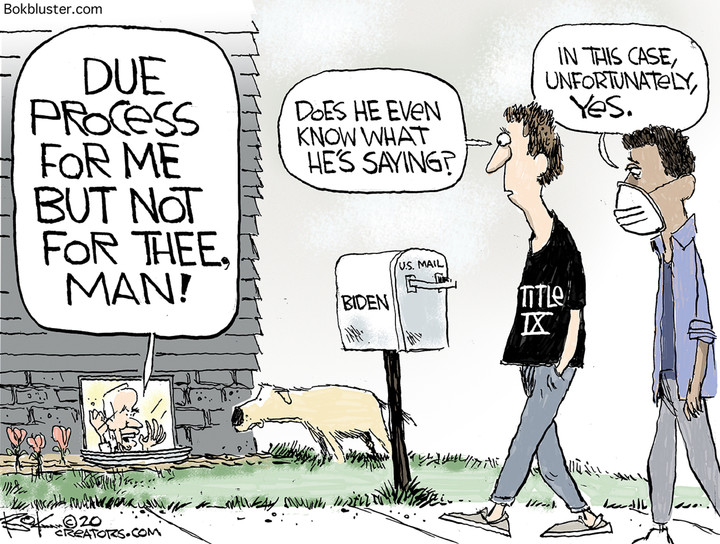 Americans know less and less history these days, which is a good thing for our candidates running for office, either high office or low office. One of the reasons Americans, when polled, say Barack Obama was a great president is that few Americans can remember any president other than Obama.

Some remember President George W. Bush, and a few more recall President Bill Clinton, but I suspect they remember Bill because he was always a lot of laughs. They surely do not recall this pronunciamento: "The era of big government is over."

Americans' deficiency in history is helping President Donald Trump, for sure, in this presidential race, but it is helping presumptive Democratic candidate Joe Biden even more. He is running his campaign from the basement of his home. He has cameras set up down there, and, who knows, he might have a canned audience down there, too. You know it is canned to erupt with wild applause every time he utters a complete sentence or whenever Joe smiles or makes a derisive remark about Trump.

As a presidential historian, I can tell you that Joe's Basement Campaign is the first ever of its kind, though personally, I think John Kerry would have done better in 2004 had he campaigned from his basement, and going back in time, Michael Dukakis would almost certainly have done better against George H.W. Bush had he campaigned from his basement and forgotten about appearing with his head protruding from a tank turret while wearing, I believe it was, a colander atop his head.

Joe's campaign is reminiscent of the good old days when Republicans campaigned from their front porches. For some reason, campaigning from one's front porch always reassured the electorate in the days of James Garfield, Benjamin Harrison and William McKinley.

I suspect that the sedate Republicans who voted for these candidates were relieved that the candidates would not be stopping off in their communities. The last Republican to wage a vigorous campaign from his front porch was Warren G. Harding, who, with his running mate, Calvin Coolidge, was favored with a tremendous victory in 1920. My guess is that even H.L. Mencken voted for the ticket. After all, Harding was to provide Mencken with many good lines.

Of course, today's electorate has no idea who Harding was, or Garfield or Harrison or McKinley or even Mencken. Come to think of it, they probably have no memory of George Washington or of Abraham Lincoln.

Both were great presidents, probably as great as Obama, though George owned slaves, and Abe kept household pets for his young sons.

At any rate, Joe is running the first Basement Campaign in American history, and I would not count him out.

Yes, I know that he is faced with a growing problem from Tara Reade, and she has just come out last week with a document that she got from her ex-husband. They were married briefly and apparently not happily. It is a court filing that affirms, he recalls, her complaining about the sexual abuse she suffered when she worked in Joe's Senate office in the early 1990s. The Democrats are looking into this, but as many as 25% of them think the Democrats should dig up a new nominee. It could get worse.

I have already urged Joe to hang tough. He has already said that he has no memory of this encounter. It is a very sound line of defense. After all, Joe cannot even remember what he said the day before yesterday. Has he ever thought of trying the defense of ageism? I would consider just explaining that at his advanced age, it is normal to forget things, even a youthful adventure such as reaching under a nubile cutie's garment. Democrats would not want to be guilty of ageism.

Besides, Democrats are always the beneficiaries of the media's double standard. I can see Joe from his basement intoning, "I remember nothing." Then he might attack President Trump for being slow to respond to "COVID-11." I am going to enjoy this campaign.