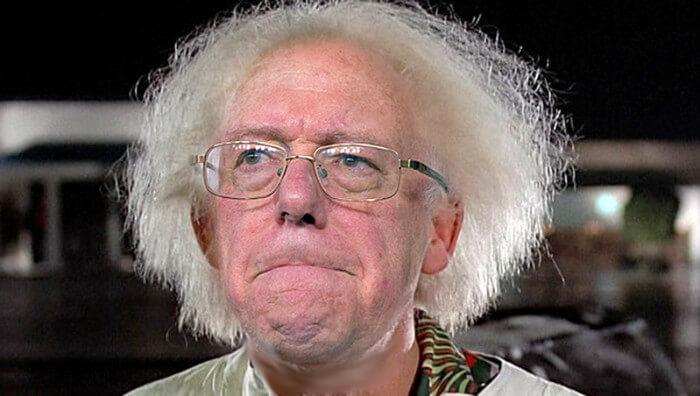 That makes him a pretty potent adversary for Hillary, at least with Democrats. One wonders, what would happen if Crazy Bernie had gone beyond socialism. What if he had declared himself a Communist? Would the Democratic base still be with him? After all, he did honeymoon in the Soviet Union in 1988 after visiting Nicaragua in 1985. Maybe next time around, an aspiring Democratic candidate will run as a Communist.

As I say, this year there was really no one else to challenge Hillary the Inevitable. Oh, there was Martin O'Malley, the former governor of Maryland. Yet he had no natural constituency even in today's Democratic Party that was large enough to give him a chance. For a while it looked like he would run as a nudist, but there are simply not enough nudists in the Democratic Party at this point. Possibly, he would have been a stronger candidate if he run as a vegetarian or a vegetarian nudist, but Martin had been photographed too often eating meat. My guess is he ate raw meat. He is that kind of he-man guy.

At any rate, he could not attract enough of the zany constituencies that compose the modern Democratic Party. Possibly, next time around Martin will have a chance for the Democratic nomination as the party expands. For instance, if the men who want to use the women's public toilets become sufficiently politicized along with the women who avail themselves of the men's room. But for now, the oddballs of the party have cast their lot with Crazy Bernie or Hillary the Inevitable.

In this battle of the titans, it looks to me like Hillary is going to win. It is not that Bernie's being a Democratic Socialist is too extreme for party loyalists. In fact, I doubt many Democrats really appreciate what a Democrat Socialist is. Those few who have thought about Democratic Socialism think of oil-rich Norway, not impoverished Greece or Spain or Africa.

The reason that Bernie is going to lose is that he really is a woolly-headed dreamer. He believes much of what the Democratic hierarchy believes. He believes that it is unthinkable to probe into Hillary's scandal-plagued past and — come to think of it — her scandal-plagued present, which is under FBI investigation. For Bernie to question Hillary's past scandals and present misconduct is to go over to the Dark Side. It is to become a Republican. Bernie will go down in defeat hollering against Wall Street and the banks, but saying not a word about Hillary's shabby history.

Thus, when he debated Hillary last week, he shouted his mantra against these legendary institutions. He questioned her judgment for accepting millions of dollars from them and voting for the war in Iraq. The rest of her record remained out of bounds. He never mentioned her dreadful record as secretary of state with all its guff about resetting policy with Vladimir Putin, the Syrian disaster, Libya and her mishandling of Benghazi, where the night our ambassador was killed she told her daughter one thing while telling the American people a brazen lie.

Nor did Bernie say anything about her long career of lying under oath, deceiving the public, and obstructing justice. She is the only person ever to pursue the presidency while under investigation by the FBI, but Bernie would not utter a peep about the investigation that hangs over her candidacy. What about the classified documents found on her personal server? What about the co-mingling of her State Department work with Clinton Foundation-related material? And what about the years of serving as her husband's enabler, while he harassed women and even allegedly raped one? These women are still out there, and they are willing to tell their stories. Why cannot Bernie help them in one of these vaunted debates? Is he anti-woman?

Well, if Bernie will not raise these questions my guess is the Republicans will shortly. Donald Trump already has. What is more, the FBI is about finished with its work. Is the truth about to catch up with Hillary?