They Were Listening to Your People, Donald 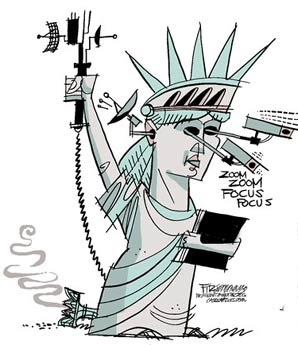 Have you been keeping up with the news from Washington, D.C.? If you have, doubtless you know that there are congressional investigations of Russian interference with our recent presidential election.

It's possible you even suspect that agents of the diabolical Donald Trump were in contact with those dastardly Russians.

Oh, yes, and there was something in the news about Russian bankers talking with Jared Kushner, the president's son-in-law, a real estate developer who now sits in an office right down the hall from Trump and can pop in at anytime.

There is a lot of news coming out of Washington these days about President Trump, congressional investigations of the Russians, and even Ivanka Trump and her White House office. But unless you are a devotee of Fox News, I shall bet that you are almost completely ignorant of a news story that came out last Friday.

Under the byline of Malia Zimmerman and Adam Housley, Fox reported, "The U.S. intelligence official who 'unmasked,' or exposed, the names of multiple private citizens affiliated with the Trump team is someone 'very well known, very high up, very senior in the intelligence world,' a source told Fox News." Now, there is a story that did not make it into the mainstream news.

Moreover, do you know that to circulate information picked up from surveillance by American intelligence agencies is a felony? So is unmasking the identities of American citizens incidentally caught in surveillance, such as the identity of retired Lt. Gen. Mike Flynn. This shadowy figure who the Fox reporters assure us is "very well known, very high up, very senior in the intelligence world" surely knows this, and they could be in very serious trouble. I suggest they get a lawyer.

After all, we have had a change of administrations in Washington. No longer are the Democrats in the White House to cover for this shadowy figure. Now Donald Trump is sitting in the Oval Office.

My guess is that he will not be happy to hear Fox News' findings that various agents in our intelligence community may have been listening in on his team's telephone calls.

Maybe these agents were not tapping their telephones, and maybe they were not tapping the soon-to-be president-elect's calls. After all, that is a pretty old-fashioned surveillance technique, and the term "tapping" is a bit antiquated. But, according to sources known to Fox, this surveillance was being directed by someone "very senior in the intelligence world." I suggest Trump get a whole team of lawyers.

According to Fox News, House Intelligence Committee Chairman Devin Nunes, a Republican from California, has known about this unmasking since January, when two sources in the intelligence community came to him and told him who was responsible, and at least one of the unmasked names. Nunes also got the serial numbers of damaging documents that chronicled the reports of this nefarious operation.

The Democrats are portraying Nunes as manic in his visits to the White House last week. Yet since he first heard about the apparently illegal surveillance of team Trump, Nunes has been asking the intelligence community to hand over the evidence that he, as chairman of the committee, has a right to see. He was stonewalled. Thus, when he heard of the material in the White House, he knew where to go. Now, the leading Democrat on the committee, Rep. Adam Schiff, has seen it. One wonders how long this surveillance of team Trump will remain a story with only Fox News and such outlets as The American Spectator.

George Neumayr of the Spectator has been reporting on this story and similar matters for a couple of weeks. Now come the Fox revelations and this breaking news: The same Adam Housley who reported on Fox's Friday story reports that Susan Rice, former President Barack Obama's national security adviser, sought the names of team Trump that were snagged by this surveillance. She had the names sent around to certain Defense Department personnel, then-Director of National Intelligence James Clapper and then-CIA Director John Brennan, along with Ben Rhodes, then Rice's deputy. Neumayr has been saying for days that all roads in this surveillance scandal lead to Brennan. Now it appears there is evidence that they passed through several other offices, too.

Obviously, there are going to be a lot of stars from the Obama years in need of lawyers. One question does bother me: How could so many Obama aides be so stupid as to eavesdrop on team Trump after Trump won the election?