Hillary Against the World 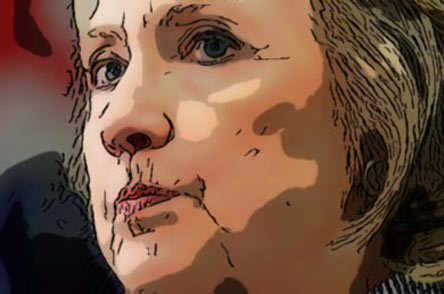 Regarding last week's string of stories about Hillary Clinton conducting her State Department business between 2009 and 2013 exclusively on a private email account, the heat — as we say here in Washington — is on in the kitchen. Her account was completely controlled by her. Even the server was controlled by her. She apparently had no State Department account when she was secretary of state, and no one thought to ask about it until late in 2014 when a Congressional committee inquiring into the bloody assault on our complexes in Benghazi sought her emails. Yet now the heat is on in the kitchen and the Episodic Apologists are turning it up. Yesterday's press conference was an attempt to calm them with the blessed emollient of Clintonian confusion. We shall see how it works.

We members of the Clinton Watch are familiar with that peculiar subspecies of journalists who compose the Episodic Apologists. They are members of mainstream media who have been covering the Clintons for over 25 years, always following the same course. They episodically fill with hope upon encountering this historic twosome. Then they collapse in indignation when that hope has been dashed by some inexplicable Clintonian scandal, say a young girl with an organically soiled dress, say missing billing records under subpoena, or say those same billing records miraculously reappearing years later in the First Lady's living quarters. Yet as certain as night follows day these dutiful journalists are revived by hope renewed.

The Episodic Apologist is as much a fixture of the Clinton Era as was the Court Historian in the Age of Roosevelt — only slightly more absurd. In the Apologists' periods of indignation they say things in print that cannot be erased. For instance, Apologist Al Hunt in the aftermath of Bill Clinton's scandalous spree of pardons condemns Bill as the "albatross" of his party and adds a gratuitous invitation for him to "drop dead." Or about the same time The New York Times' columnist Bob Herbert says "Bill Clinton has been a disaster for the Democratic Party ... the man is so thoroughly corrupt it is frightening." Or the summary judgment of the New York Observer on Hillary as she tripped out of the White House in 2001: "Had she any shame, she would resign" from the Senate. Yes, they really said these things! Yet in a matter of months their hopes were renewed. Hillary even became their "inevitable" presidential candidate until they found another messianic figure.

It is as though the Episodic Apologist has lost a certain faculty of the brain that allows him to recall, in the case of the Clintons, past transgressions. The Apologist approaches the Clintons with the best of journalistic intentions. He — or she — records every sordid detail of a Clinton scandal, and yet as time goes by they utterly forget. They behold the hated Republicans. The Republicans become the alternative to the Clintons, and the poor Episodic Apologists cannot see things clearly. They collapse in the fear that by pursuing the Clintons in scandal they will be complicit in a Republican triumph. Perhaps even a Republican Reign of Terror.

I witnessed this neurological phenomenon firsthand during the Lewinsky scandal when a journalist chum came up to me and said, "If he did this to that girl you're right, Tyrrell. He should be impeached" — or something to that effect. Well, Bill did do it to — or perhaps with — that girl, but by the time we all knew it my friend had turned his ire on the hellish Ken Starr and eventually, during impeachment, on the hellish impeachment managers. In time his hope for the Clintons was renewed.

To return to the present Clinton scandal, it is now too early to say that the Episodic Apologists will maintain their indignation. Over at the National Journal there are indications the journalists are really angry. They report in a headline that "Democrats Aren't Rushing to Defend Hillary Clinton." Another headline distills Ron Fournier's indignation: "Maybe Hillary Clinton Should Retire Her White House Dreams." The Washington Post, the New York Times, doubtless even Brian Williams, are angry, and Brian probably knew about Hillary's personal account all along.

So we shall see how long the indignation of the Apologists lasts. Remember the hellish Speaker Boehner is out there and the hellish Leader McConnell. Then, too, there are all those hellish Republicans angling for the White House. Maybe if Hillary can remind the Episodic Apologists that apres moi le deluge she will survive one more scandal. Then it will be "Hillary, the White House Years," and more of the same.