A wretched governor gets a taste of his own medicine 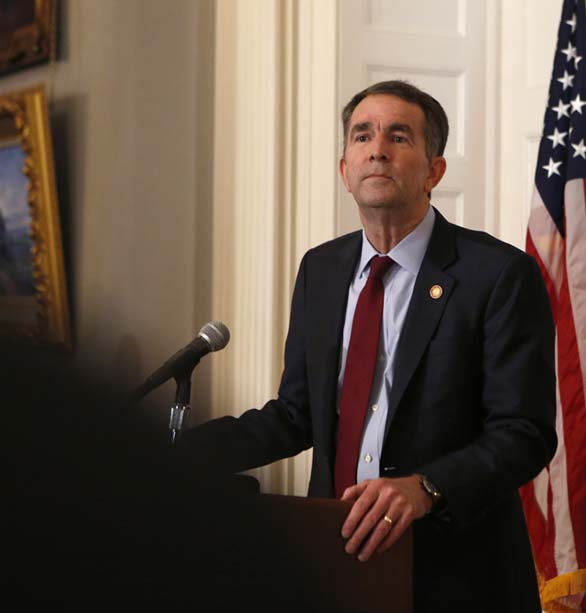 Whatever is to be the ultimate fate of the wretched Gov. Ralph Northam of the great commonwealth of Virginia, I wonder what he now thinks about those who use the term "racism" as loosely as he did in his race with Ed Gillespie.

In his rabble-rousing 2017 campaign, he actually rebuked Gillespie for his nonexistent "racist rhetoric and fearmongering." I do not recall his apologizing for that false charge in his apology-laden press conference over the weekend. Nor do I recall any apology from him about statements he made about late-term abortion during the past week. He was apologizing for various recreations of his that occurred some 35 years ago.

As everyone doubtless now knows, over three decades ago, a picture appeared in Northam's medical school yearbook page portraying two people, one dressed in blackface, another dressed in the gothic paraphernalia of a Klansman. Claims were made that one of these bigots was Northam.

The governor at first apologized for the picture. Then he denied it was him, though his apologies became even more fervent when he admitted to having appeared on another occasion wearing black shoe polish on his face and mimicking Michael Jackson doing Jackson's famed "moonwalk."

The roof caved in on Northam, with Republicans and Democrats in a lather to outdo one another in calling for his scalp — if I might still use the term. If I have committed an offense, I, of course, apologize, and that is a profuse apology, before Pocahontas gets into the act.

I have attempted to come to terms with Northam's predicament. Since his press conference, all sorts of claims have been made against him. He has been compared to our president. He has even been compared to Brett Kavanaugh, though Kavanaugh has been convicted of no crime and has not even apologized profusely for any crime. Actually, he has been raised to the Supreme Court.

Northam turns out to be a miserable politician. He should not have even gotten to the level of lieutenant governor. Were he skilled as, say, former President Bill Clinton was skilled, he would have treated the charges brought against him strategically. Clinton overcame charges of rape, sexual harassment, campaign finance abuse, general corruption and other charges by reacting at the first sign of trouble and developing a plan. Back in Arkansas, there lie hidden still more charges against him, but they will probably never be brought up, even by an aspiring Edward Gibbon. Bill and his lovely wife, Bruno, never let a controversy get to the stage of Northam's controversies.

My advice is, whatever the governor thought about that picture's origin, he should have agreed it looked like him, asked forgiveness and then throw himself on the mercy of his peers. After all, how long are we going to hold the commission of a nonfelonious crime against a person? Throughout Eastern Europe, in countries once ruled by communists, there are people who collaborated, some with the communists, some before that with the Nazis. Many have even served in government. As bad as wearing blackface might be, it does not match spying on your countrymen.


Years ago, more than 50 years ago, one of my wisest coaches in high school told me to forget my grandparents, by which he meant forget their battles. Americans, in times past, argued along racial lines, ethnic lines, religious lines and even union member lines. Actually, northerners did not much like the southerners, and visa versa. The time had come, my old coach felt, to give up the battles of the past. That is even truer today.

That is the kind of thing Gov. Northam should now be apologizing for.