The Dems' Blueprint for Impeachment 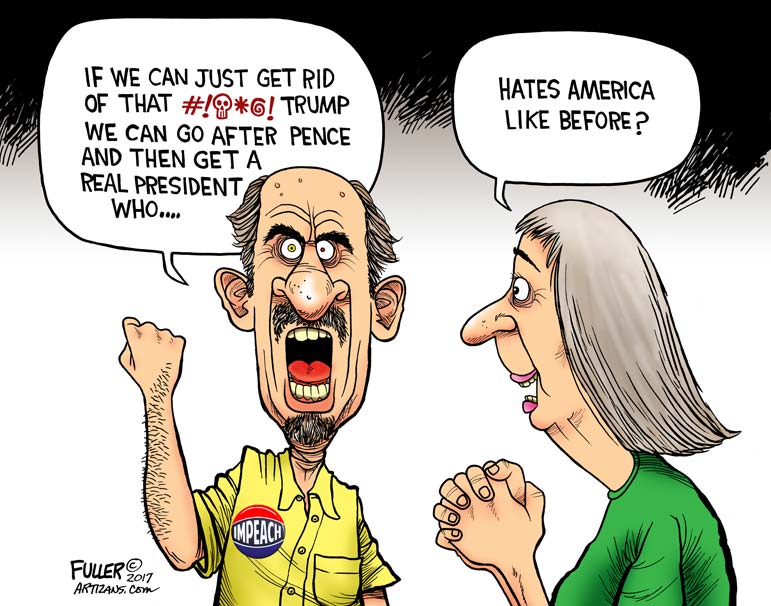 Do you recall back in July of 2016 when candidate Donald J. Trump brought down the house at a campaign press conference in Miami by jokingly pleading with the Russians to hack into Hillary Clinton's emails?

Bill Clinton's wife — Bruno, as we call her — was claiming that she had lost some 30,000 emails, so Trump got a laugh by saying, "Russia, if you're listening, I hope your able to find the 30,000 emails that are missing." At least he got a laugh from the civilized minority who was following him.

Apparently, we of the civilized minority were contributing to an act of treason. We will possibly all be indicted.

Over the weekend, The New York Times revealed that that seemingly harmless joke roused the suspicions of the FBI. So apparently did a retired British spy's idiotic dossier, which claimed Trump was involved in some kind of gynecological exuberance in a Russian "honey trap."

Such claims led the bureau to open a secret investigation into the Trump campaign and his early presidency. The FBI has quietly been investigating him for a couple of years now and will, I have no doubt, insist that he has been colluding with the Russians on some dark and clearly illegal dealings, though The Times was careful to add that special counsel Robert Mueller III has, as yet, found no collusion by President Trump.

Thus Donald Trump is the first presidential candidate ever to be suspected of treason in American history. He may be the first to be indicted. Possibly, he will be hanged.

Among his high crimes and misdemeanors is an amusing joke and a completely fictional account of his deportment with Russian ladies of delight in a Moscow hotel years ago — dreamed up, I should add, by a man who sounds like a pathological liar.

He was hired by the Clintons. It might sound laughable at this stage, but I believe it is the course that will be followed by the Democrats in running down a president who has brought so many jobs and so much renewed vigor to the American economy.

Forget the old saw of the Clinton era "It's the economy, stupid." Critics such as former House Speaker Newt Gingrich say the reckless pursuit of Donald Trump sounds like America is heading down the path of a banana republic. But who is to stop the president's opponents?

Meanwhile, the whereabouts of Hillary's 30,000 emails remains a mystery. The misdeeds of The Clinton Foundation are forgotten. And, by the way, what about the hundreds of thousands of dollars hauled in from Russia by ex-President Bill Clinton, he of the Churchillian oratory?

Yet, as I say, Democrats have colluded with Russian communists for years. There was the Democrats' love affair with the communist agent Alger Hiss beginning with then-Secretary of State Dean Acheson's boast, "I do not intend to turn my back on Alger Hiss." More recently, there was Sen. Edward Kennedy's sending his emissary former Sen. John Tunney to Moscow to — I guess the word is "collude" — with the head of the KGB about how they might cooperate with each other to beat then-President Ronald Reagan in 1984. It has all been documented by the historian Paul Kengor in his stupendous book "The Crusader: Ronald Reagan and the Fall of Communism." He even reports on where you might find the Soviet documents. He got them in Moscow.

More recently, a Democratic president was caught on a live mike telling Russian President Dmitry Medvedev, "After my election I have more flexibility," to handle contentious issues such as missile defense. Is this not collusion? But President Obama was not telling a joke. He was serious. In America today, jokes and ribaldry are what attract the suspicions of the FBI. We live in frivolous times.