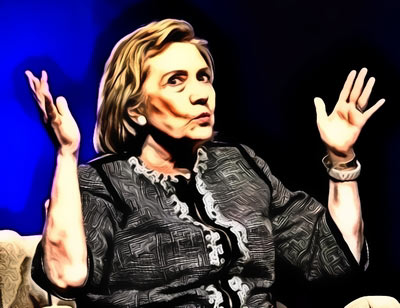 This week, three weeks before the Iowa caucuses, Hillary Clinton spent valuable time during an appearance on "Face the Nation" swatting down stories that surfaced Friday. Early on Friday morning when most Americans are asleep, save second-story men, the State Department released thousands of Clinton's emails. In one she seemed to be asking her aide, Jake Sullivan, to send her classified information across a "nonsecure" line. That is to say, across her personal server. She was impatient to read the email's contents and could not wait for it to be sent on a secure line. That strikes a lot of those who follow such matters as a clear breach of the law regarding the handling of classified information, or perhaps I should say another clear breach of the law regarding the use of classified information. On "Face the Nation" Clinton termed the growing imbroglio a "non-issue."

Well, as with a lengthening list of problems facing Clinton, we shall see. On Monday, the respected investigative reporter for Fox News, Catherine Herridge, reported that "The FBI investigation into Hillary Clinton's use of private email as secretary of state has expanded to look at whether the possible 'intersection' of Clinton Foundation work and State Department business may have violated public corruption laws, three intelligence sources not authorized to speak on the record told Fox News." I sense there is going to be more of these stories.

Late last week, I wrote in The American Spectator that the Federal Bureau of Investigation was working on the indictment of Clinton. Within two weeks to 60 days, the Bureau will recommend to the Justice Department that Clinton and certain of her aides face charges for the way they have handled classified information on her server. My sources tell me that the Bureau already has the case "locked. ... They are building a case that is unassailable. " And another source said the case that the FBI has built was ready two weeks ago.

The evidence involves material from Clinton's server that the Bureau has gathered in the course of its months-long investigation of her and her staff. Last week, others also weighed in, most notably former prosecutor Joseph DiGenova. From everything I can tell this story is going to get worse for Clinton. I Herridge agrees with me.

The charges will consist of some of the following:

One source told me that, "the top floor of the FBI [the leadership] is deeply engaged in the investigation." And another said the Bureau has "no choice" but to ask Attorney General Loretta Lynch for indictments. The FBI's director James Comey has a reputation for being incorruptible. He wanted to indict General David Petraeus on far fewer charges than his investigators have come up with on Clinton. Now his chief of staff has reportedly said that the Bureau plans to seek indictments of Clinton and her aides despite the politics of the case. One source told me that "the Bureau doesn't care about politics." This case is seen as a national security matter.

If it is ignored, the fear within the intelligence community is that it will be impossible to prosecute future defendants being charged with the mishandling of classified information. The intelligence agencies would mutiny if Clinton were given a pass. Said DiGenova last week, "The intelligence community will not stand for that. They will fight for indictment and they are already in the process of gearing themselves basically to revolt if [the attorney general] refuses to bring charges." This is apparently one of those processes that takes on a life of its own.

Why will the indictments be recommended in the time frame I have mentioned? Justice Department policies mandate making such decisions as far in advance of elections as possible. If there are conflicting winds blowing in the Bureau or DOJ, they must avoid the appearance of being motivated by partisan politics. So sixty days is about as long as the Bureau or DOJ can wait. On the other hand there are those Democrats who would like the action to begin this month. That would allow Vice President Joe Biden and Secretary of State John Kerry to toss their hats in the ring.

This brings to mind a curious statement by Joe Biden just the other day. On Jan. 7 quite out of the blue Joe said to CNN, "I regret it every day" — "it" being his decision not to run for the presidency. But after saying his decision not to run was the right decision for his family, he went on to say he would be "staying deeply involved." What could that mean? Does he know something we are not to know about the doings of the FBI ... and its 150 agents now working on the Clinton case?