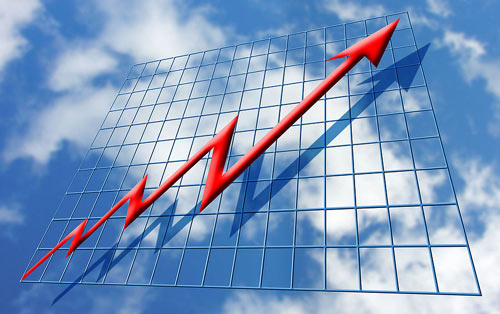 The United States added 266,000 jobs in November as the unemployment rate fell to 3.5%, reflecting a surge of strength in a labor market that has muscled through recession fears that flared over the summer.

The data, released by the Bureau of Labor Statistics, handily beat expectations. Analysts had forecast roughly 180,000 new jobs for the month. The 3.5% unemployment rate is back at a 50-year low. The stock market roared higher on the news.

"I don't see any end to it right now," National Economic Council Director Larry Kudlow said Friday of the labor market run. "What I see is more strength."

Markets rejoiced at the report, with the Dow Jones industrial average closing up more than 330 points, or 1.2%, on Friday. The Standard & Poor's 500 index closed up 0.9% and the tech-heavy Nasdaq was up 1%.

The report was also welcome news for a White House, where senior aides had become concerned several months ago about the economy running into headwinds caused by Trump's trade war with China. Several top advisers had hoped for a rebound later in the year.

As Democrats began a process for impeaching Trump in the past two months, the White House has sought to play up positive economic news as a sign his stewardship of the financial conditions was working.

A Trump campaign ad released in October argued that while the president is "no Mr. Nice Guy," he had been successful in creating jobs even as Democrats focused on investigations.

He recently toured a manufacturer of Apple computers and gave a speech to the Economic Club of New York.

Before the jobs numbers were announced Friday, Trump tweeted about the growth in the stock market and wrote: "It's the economy, stupid."

"Despite some encouraging numbers, the November jobs report offers little solace to the farmers and hard-working families who are struggling to stay above water with the cost of living rising and uncertainty surging," said House Speaker Nancy Pelosi, D-Calif.

The labor market and stock market have emerged as two of the biggest engines in the economy during Trump's third year in office, and they are both at or near record levels. Consumer sentiment is also picking up. In contrast, wage growth remains sluggish. And economic growth has shown signs of slowing, pulled back by weak business investment. Many executives and economists believe this is because of the uncertainty caused by prolonged trade standoff between the White House and China, which remains unresolved.

U.S. and Chinese negotiators are continuing to discuss possible solutions. If no agreement is brokered, the White House has said it would impose new U.S. tariffs on more than $160 billion in new Chinese imports after Dec. 15. A number of companies have signaled that they are holding back on new investments until they see how the situation is resolved.

But the uncertainty doesn't appear to have slowed hiring much in recent months. The U.S. economy added an average of 205,000 jobs per month from September through November, a very healthy clip.

"What a way to end the year," said Julia Pollak, an economist at ZipRecruiter, an online employment marketplace. "The overwhelming takeaway from the whole year, and indeed the past nine years, is that job growth has been remarkably stable and steady."

In the near term, it's easier for employers to invest in hiring workers than it may be to, say, build a new factory during a protracted trade war, said Mark Hamrick, senior economic analyst at Bankrate.com.

"If you're going to build a structure, that's a substantial commitment," Hamrick said. "The good news for employers, and the bad news for workers, is that most employees have virtually no job security, so that does provide employers a bit more flexibility."

Analysts remain puzzled, though, why wages haven't picked up faster at a time when the labor market remains so tight. Typically, companies pay workers more when the unemployment rate is low to prevent people from switching jobs. Over the past 12 months, average hourly earnings have risen by 3.1%, slightly up from an increase of 3% reported last month.

Wage growth peaked in February at 3.4% and has pulled back since then. Wages for non-supervisors are growing at just shy of 3.7%, according to the latest data through November. That's better than for workers overall, but even that figure lags behind the trend from the late 1990s. It's about half a point less than much of 1997-98 (as well as 2006-07), and there's concern that this metric is also starting to recede.

Economists are puzzled about the cause. Some believe that falling union membership and the lack of bargaining power by employees has made it harder for people to demand a raise. Others point to workers seeking better benefits in exchange for higher wages, or low levels of inflation that have made it easier to keep wages low.

"It doesn't make sense. We would expect in a tightening labor market to see stronger wage growth," said Heidi Shierholz, senior economist and director of policy at the left-leaning Economic Policy Institute. "Instead, wage growth has been backsliding this year."

November's jobs tally was boosted by thousands of General Motors workers who returned to their jobs in late October after a lengthy strike. Roughly 54,000 new manufacturing jobs were added in November, BLS said, a number that included the GM workers returning.

Manufacturing appears to have regained its footing a bit after several months of extreme pressure. Data showed that within manufacturing, jobs in motor vehicles and parts was up by 41,000 in November.

Overall, the sector has slowed from the pace that added 264,000 manufacturing jobs in 2018. But it is stronger than the 7,000 jobs lost in 2016, which came during an economic slowdown that helped propel Trump to election. Pollak said this year's figures suggest the country has largely managed to avoid the global manufacturing slowdown, even despite trade tensions.

The retail trade stayed about unchanged, with employment rising in general merchandise stores and car vehicle and parts dealers. But clothing stores shed about 18,000 jobs.

Health care added 45,000 jobs, including in ambulatory health-care services and in hospitals. The health-care sector has added 414,000 jobs over the past 12 months.


Jobs in leisure and hospitality continued their upward trend. The industry has gained 219,000 jobs over the past four months. But the mining sector shed 7,000 jobs last month, and mining jobs are down by 19,000 since a recent peak in May.

The BLS also revised its job growth figures for October from 128,000 to 156,000. The jobless rate for that month rose slightly from the month before to 3.6%. Those numbers were affected by the GM strike, in which workers shut down production for six weeks at the automaker. The strike spurred layoffs from Canada to Mexico in related industries and caused a rise in unemployment claims in states like Michigan.

No president in modern history has lost reelection when the unemployment rate was below 7%, and the jobless rate now is half that. And while voters tend to still give Trump relatively strong marks on his handling of the economy, his relatively low poll numbers otherwise have not shown signs of budging.

This could be a sign voters might judge his performance on a broader range of issues, said Moody's Analytics chief economist Mark Zandi. And economic growth has been uneven, with unemployment beginning to rise in some critical states that could determine Trump's re-election.

"The economy matters to the election but it matters much less than in any past election that I have followed," he said. "Because people's perceptions of the president's performance are cemented. They're in brick."