CNN shows how not to normalize anti-Semitism 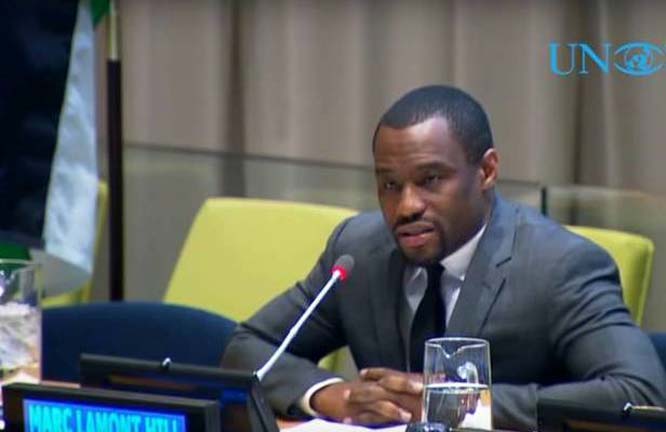 You may never have stumbled across Marc Lamont Hill while watching CNN.

Hill is a professor of media studies and urban education at Temple University in Philadelphia. But the telegenic academic touts himself as "one of the leading intellectual voices of the hip-hop generation" and has hosted shows on the BET and VH1 channels, and has appeared as one of the many left-of-center talking heads on the more mainstream CNN. There he has spoken up against racism and often alleges that blacks are being targeted by police on the streets of American cities.

But in a demonstration of how intersectional ideology works, he was at the United Nations this week giving a speech at a ceremony that marks the anniversary of the passage of U.N. Resolution 181 in November 1947 that called for the partition of the then British Mandate for Palestine into Jewish and Arab states. But it was not a celebration of the creation of the State of Israel or even one advocating a two-state solution. Instead, it is the United Nations' International Day of Solidarity with the Palestinian People. At this annual event, the rebirth of Jewish sovereignty in the Jews' historic homeland is lamented as a crime that resulted in the Palestinian nakba, or "disaster," and an excuse for hours of attacks on Zionism and the Jews.

At this year's edition, Hill gave a speech in which he justified and endorsed Palestinian violence against Israel and Jews; analogized the Palestinian war against Israel's existence with the struggle for civil rights in the United States; called for the implementation of the "right of return," which would allow millions of descendants of the 1948 Arab refugees into Israel, and thus end its existence as a Jewish state; and issued a ringing endorsement of "a free Palestine from the river to the sea," an echo of the rhetoric of Hamas and other terror groups who will accept no solution to the conflict except one in which Israel is erased.

If that wasn't enough, Hill even joked that he was thirsty because he had just flown back to New York from "Palestine," and that he had refused to drink "Israeli water" on the trip.

The main point about Hill's diatribe wasn't that his position was antithetical to any notion of peace, except perhaps the peace of the grave for Israeli Jews. Nor is it unusual for such sentiments to be uttered at the United Nations.

The interesting question posed by Hill's speech was whether the network that is currently promoting programming detailing "America's state of hate," as well as features about the rising tide of anti-Semitism in Europe based on a new poll illustrating how widespread anti-Jewish beliefs are on the continent, thought there was nothing wrong with providing a mainstream media perch to someone who promoted anti-Semitism.

But whether you love the network or hate it, CNN did the right thing. On Thursday afternoon, the network announced it had severed ties with him and that he was no longer under contract with it as a paid commentator.

CNN can expect to be deluged with accusations of racism and anti-Semites on both the left and the right will almost certainly now claim this incident is proof that Jews and Zionists control the media.

Yet what was at stake in this controversy wasn't so much the career of one person as it was the principle of whether hatred of Jews is the sort of thing that we must agree to disagree about.

Now that CNN has cleaned house, it has, whether it realized the implications of what it was doing or not, set a standard that others need to emulate with respect to those who spout the same propaganda as Hill. That’s true of members of Congress who support anti-Semitic BDS campaigns and oppose Israel's existence like freshman members of Congress like Representatives Ilhan Omar and Rashida Tlaib. And it’s also the case with other academics or activists who are in the same camp — like the leaders of the Women's March that spearhead resistance to President Donald Trump and which, like Hill, has ties to the Nation of Islam’s Louis Farrakhan. It's no longer possible to pretend that you can ally yourself with anti-Semites without being tainted by their hate.

We needn't waste much time answering anyone who claims that those who wish to destroy Israel are not expressing anti-Semitism. Suffice it to say that if you think even one Jewish state on the planet is one too many and are willing to deny to Jews that which you wouldn't think of denying to any other people—the right to live in peace and security with the right of self-defense in their own homeland—then you're practicing discrimination. And such bias against Jews is called anti-Semitism. Indeed, Hill's speech proves that anti-Zionism is indistinguishable from hatred of Jews.


Nor do we need to take seriously Hill's disingenuous defense that he is really pro-peace. A speech that called for Israel's elimination via the right of return, and which defended Palestinian violence as justified and comparable to the efforts of the U.S. civil-rights movement (he also derided those who think that the movement succeeded because of its embrace of the nonviolent doctrines of Mahatma Gandhi or Dr. Martin Luther King Jr.), cannot be confused for advocacy for peace. Despite Hill's claims to the contrary, to speak of establishing a Palestine "from the river to the sea" is nothing short of support for genocide since neither the Fatah-run Palestinian Authority nor Hamas believes that Jews should remain inside a Palestinian state in their nightmarish vision of the future.

That is why it was appropriate for decent people to ask that Hill no longer be given the sort of platform that CNN provides to its in-house pundits.

While Temple University donors should protest his position there, they shouldn't expect to succeed. Hill was lured to the university with a tenured position, and in today's bizarre academic environment, such radicals are viewed as rock stars who burnish a school's reputation rather than tarnish it. Nor are his views different from many of those employed on North America campuses teaching Middle East studies.

Yet after the stand that CNN has taken, it's impossible to deny that Hill's continued presence on other media outlets as well as at a position of trust at a major university normalizes hate and sends a message that anti-Semitism is now considered acceptable behavior in what elites consider polite society. Those who fail to disassociate from and Hill and others who share his noxious beliefs must be branded as hypocritical liars if they claim to oppose hate.