The court and the right to faith in the public square 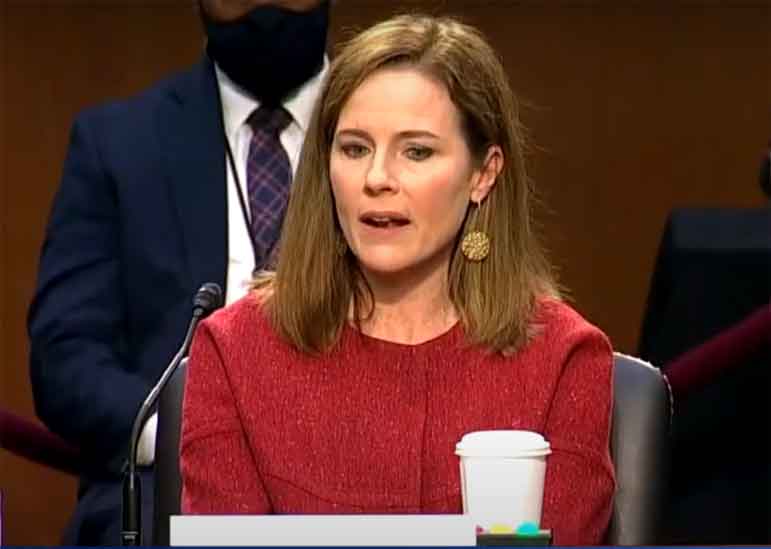 When the confirmation hearings for Judge Amy Coney Barrett's nomination to the U.S. Supreme Court begin on Oct. 12, there will be more at stake than her chances of succeeding the late Ruth Bader Ginsburg. The hearings will take place only weeks before the presidential election and when the memory of her Republican sponsors' refusal to grant a hearing, let alone a vote, to Judge Merrick Garland when President Barack Obama nominated him in his last year in office is still fresh in the minds of Democrats. That has not only made the debate over President Donald Trump's nomination of Barrett a bare-knuckles partisan fight but also part of an epic struggle for raw power over the federal government.

While Democrats claim the high ground in this battle, they are unashamed to mouth arguments that are identical to the ones Republicans used in 2016 when they wanted to stop Obama from appointing a liberal to replace Justice Antonin Scalia, the intellectual leader of the court's conservatives. And Republicans have even less shame to now echo the points made four years ago by Democrats as they say the Senate must 'do its job" and fill a vacancy on the nation's highest court.

The growth of the high court's importance is a function of the increased power of the administrative state and the inability of Congress, no matter which party controls it, to act as a check on the executive branch. The Supreme Court has become a super-legislature that alone has the ability to override a president and his appointees, as well as Congress. That is why bruising court confirmation fights, which were once rare, are now a given no matter how qualified the nominee. In that sense, the confirmation of Barrett, who would theoretically give conservatives a decisive 6-3 SCOTUS majority, is, in the long term, almost as significant as the outcome of the presidential election.

As such, the majority of American Jews who are loyal Democrats and liberals are firmly opposed to Barrett and her GOP backers. But there is one aspect of the debate about her nomination that ought to concern even those on the left who are inclined to oppose her. That is the question of whether the court will prioritize the First Amendment right to free exercise of religion when it conflicts with other objectives the government seeks to advance.

One of the key points of contention on the court in recent decades has been whether or not to ensure that religious believers are not effectively forced to contradict their faith or discriminated against because of their beliefs. It has come up time again in a variety of difficult cases that sometimes pit the desire to safeguard an end to discrimination against gays or to provide insurance for free birth control.

For many Americans, the value of those objectives is so great that it should outweigh any concern about whether it forces others whose faith opposes gay marriage, birth control or abortion-inducing drugs to go against their consciences. But even those who favor those provisions from a policy perspective or from a belief in equality need to take into account that even as the country has embraced their causes, religious liberty is still America's first freedom and cannot be overridden except in the most extreme circumstances.

That is why one of the points of attack against Barrett by her critics is so troubling.

During her 2017 confirmation hearing for the court of appeals bench where Barrett currently serves, Sen. Dianne Feinstein (D-Calif.) claimed that the nominee's Catholic faith played too large a role in her life, and that 'the dogma lives loudly within you." The viral video of what seemed to be a not-so-subtle attempt to impose a constitutionally impermissible religious test of her qualifications for office turned the judge into a conservative folk hero and, along with her sterling reputation as a thinker and jurist, played a significant role in bringing about her nomination to the Supreme Court.

Let's hope that Democrats on the Senate Judiciary Committee will not make that same mistake again. They would do far better to instead concentrate on questioning Barrett about her views on the Constitution and issues that may come before the court. That's true even if the nominee is likely to answer them, as Justice Ginsburg did at her 1993 confirmation hearing, and say that she cannot comment on cases that she may be asked to rule on.

But the abuse being thrown in Barrett's direction about her faith isn't only coming from politicians. Elsewhere, the invective against Barrett on liberal Twitter exchanges — and even the news and opinion pages of mainstream publications, including The New York Times — have focused to a disturbing extent on her faith and whether a pious Catholic who opposes abortion ought to be tolerated on the court or the public square in 21st-century America.

Newsweek ran a story that alleged that 'People of Praise," a small Catholic charismatic group to which Barrett belongs, was the inspiration for Margaret Atwood's The Handmaid's Tale. This proved to be false, and the magazine issued a correction that undermined the entire premise of their story. Yet that hasn't stopped it from inspiring an avalanche of Twitter abuse aimed at Barrett that depicts her as a subservient 'handmaid" to men, despite the fact that she, a highly successful working mother of seven, including two adopted Haitian orphans and a special-needs child, is nothing of the kind.

Others have made an issue of her 2006 commencement speech at Notre Dame University, in which she urged graduates to 'Keep in mind that your legal career is but a means to an end, and â€¦ that end is building the kingdom of G od," which some have compared to the beliefs of Al-Qaeda. That not only takes out of context a rather anodyne sentiment about serving the greater good rather than self-interest, it bears more than a passing resemblance to a speech given by Justice Ginsburg. That speech urged young lawyers to also, 'Do something outside yourself, something that makes life a little better," and was chanted in the traditional cantillation, instead of the reading of the Haftarah on Rosh Hashanah in a New Jersey Reform synagogue in what seemed like an unintentional parody that also became a viral video.

At the heart of the issue is not merely contempt for conservative Christians, as well as Orthodox Jews who may share some of their concerns. It's a belief that religious freedom merely means the right to practice your faith in the privacy of your home, rather than unashamedly in the public square. That doesn't seem like much to ask, yet in an era when politics has replaced religion for so many Americans, it's more than many secular people, no matter their ethnicity or nominal religious identity, are willing to grant.

Jews who oppose Barrett because of her conservative ideas and views about abortion or the Affordable Care Act, coupled with the fact that she is Trump's nominee, need to tread carefully when it comes to her faith. They should also understand that if conservative Christians can be legislated into an inferior status, the same can just as easily be done to Jews. As much as liberal politics is the religion of many contemporary Jews, defense of religious liberty is the principle that guarantees their freedom just as much as it does to those whose creeds they view with contempt.