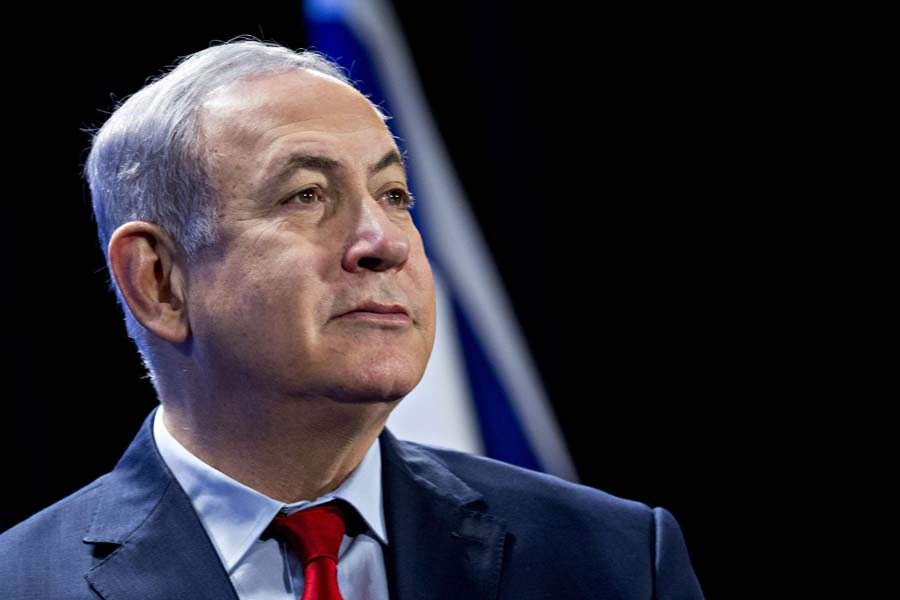 Hamas, which seeks to annihilate Israel, certainly was none too pleased with Israeli Prime Minister Benjamin Netanyahu's announcement Tuesday evening that if re-elected, he will apply Israeli sovereignty over the Jordan Valley and the northern Dead Sea in coordination with the United States.

Hamas has good reason not to like what Netanyahu said. It even made sense that Gaza's terror regime tried to harm Netanyahu politically by launching a volley of missiles at Ashdod while Netanyahu was giving a speech in the city. (Netanyahu's political rivals on the left and right were quick to take Hamas' bait and use Hamas' aggression as a means to score political points against Netanyahu).

Hamas was right to hate what Netanyahu said because Netanyahu's statement Tuesday evening was a strategic blow to the hundred-year-old Palestinian war against the Jewish state.

What did Netanyahu do in that statement? Most media commentary claimed his statement wasn't substantive. That it was just another political promise from a desperate politician who is looking with increasing panic at unflattering polls.

But that assessment obscures more than it reveals. While Netanyahu may be concerned about his polling numbers, his statement Tuesday was not a display of political desperation but of diplomatic triumph. Netanyahu's statement made clear that he enjoys a cooperative relationship with U.S. President Donald Trump that has no parallel in the history of Israel-U.S. relations.

Netanyahu said Trump will present his peace plan mere days after the election. Immediately after Trump presents his plan, Netanyahu announced that he will work to advance an Israeli initiative that will lead to the application of Israeli sovereignty in Judea and Samaria "on the [Israeli] communities and other areas with maximum coordination with the United States."

Netanyahu continued that he has already received the administration's acceptance of his plan "to apply, with the establishment of the next government, Israeli sovereignty over the Jordan Valley and the northern Dead Sea."

Sources in Washington acknowledged that there is no contradiction between Netanyahu's plan and Trump's peace plan.

It is impossible to overstate the significance of these statements.

For the past 52 years, every Israeli prime minister has tried to convince the United States to agree to give some sort of recognition to Israeli rights to Judea and Samaria. All of them failed.

During his premiership, Ariel Sharon presented then-president George W. Bush's letter to him from April 2004 as an earth-shattering diplomatic achievement. The letter was Bush's response to Sharon's plan to unilaterally withdraw all Israeli civilians and military personnel and installations from the Gaza Strip.

In his letter, Bush wrote: "As part of a final peace settlement, Israel must have secure and recognized borders."

Bush added, "In light of new realities on the ground, including already existing major Israeli population centers, it is unrealistic to expect that the outcome of final status negotiations will be a full and complete return to the armistice lines of 1949."

Sharon's claim that the Bush letter represented a major achievement and a shift in U.S. policy regarding Judea and Samaria was political, not substantive. He wished to convince the public that Israel would gain something from throwing ten thousand law-abiding Israeli citizens out of their homes and destroying their communities and handing over Gaza, as well as four communities in Samaria, lock, stock and barrel to the PLO and Hamas.

In reality, as then-Secretary of State Colin Powell was quick to note, the Bush letter did not represent a change in U.S. policy regarding Judea and Samaria. There, as in every other U.S. statement on the areas before and since, the U.S. gave the Palestinians a veto over all Israeli claims to national rights in Judea and Samaria.

Tuesday, Netanyahu announced that he has convinced Trump to take away the Palestinian veto. This is an unprecedented shift in U.S. policy in Israel's favor.

Moreover, Netanyahu did make a political promise. He said that this shift isn't mere verbiage. It is the basis of a policy that he promised to implement "immediately" after he forms the next government if the public re-elects him next Tuesday.

Netanyahu concluded his remarks by noting, "We haven't had an opportunity like this since the Six-Day War and it is doubtful that we will have such an opportunity in the next 50 years.

It is important that the Israeli public also understand that he is right.

Long-time JWR contributor Caroline Glick is an award winning columnist and author of “The Israeli Solution: A One-State Plan for Peace in the Middle East.”