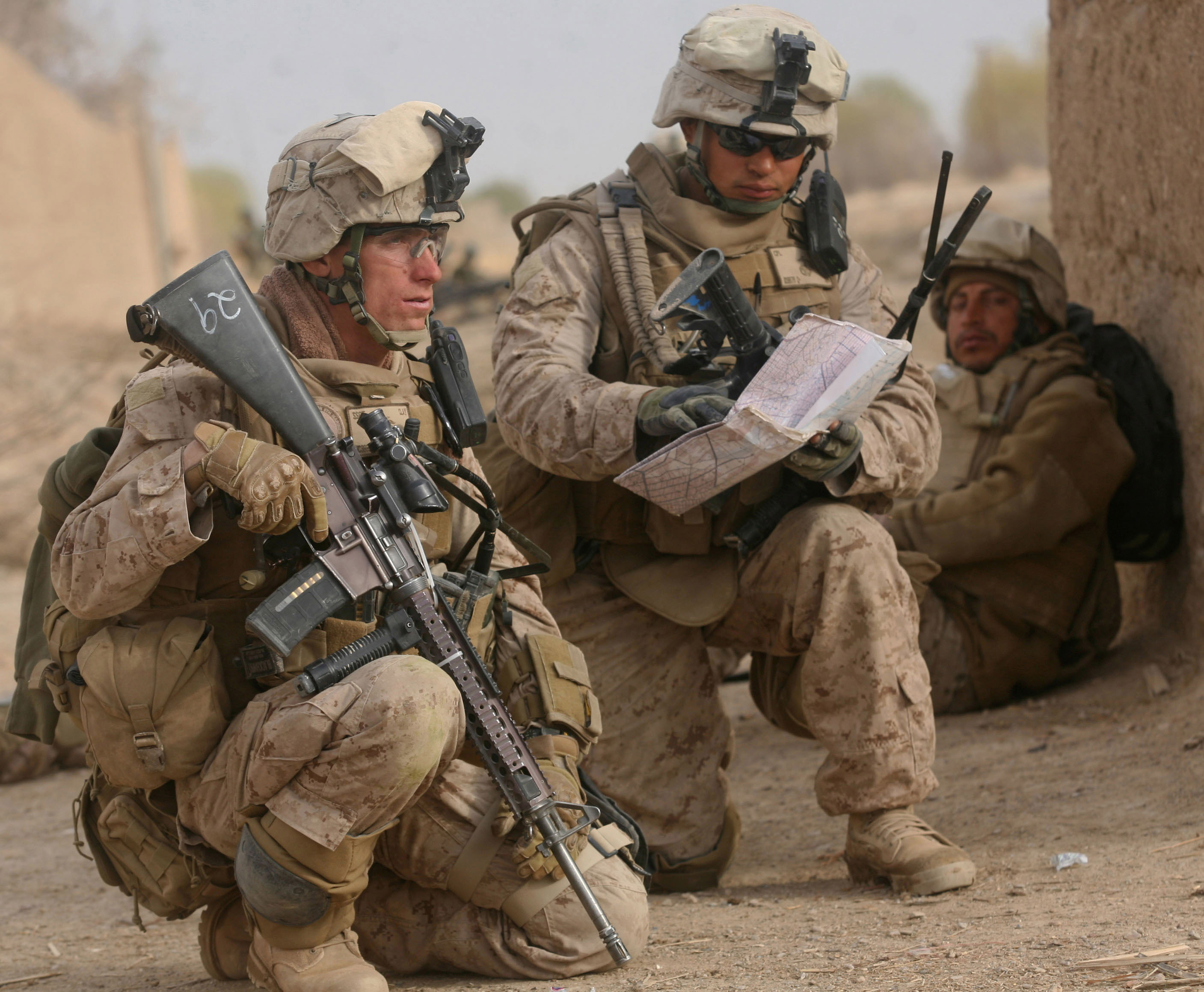 Staff Sgt. Ryan Clay, left, the platoon sergeant for 3rd Platoon of India Company, 3rd Battalion, 6th Marines, and Cpl. Anthony DePrimo, a squad leader with 3rd Platoon, study a map while on a patrol in Helmand province, Afghanistan, in 2010.

STATESVILLE, N.C. - Ryan Clay and Anthony "Rocco" DePrimo were in different places in life when they met as Marines more than 12 years ago.

Clay was a combat instructor who already had seen war in Afghanistan and Iraq, where he earned a Purple Heart.

DePrimo was fresh out of high school and boot camp, a self-described former "pretty-boy dude" who followed in his father's footsteps to become a Marine.

"Yeah!" DePrimo responded, his face lighting up. "There was probably some hatred there."

That was before they served together in the largest single battle of the Afghan war, in which more than 15,000 U.S., British, Afghan and other coalition troops fought to take control of the Taliban stronghold of Marja nine years ago.

That was before they lost brothers in arms together. Before DePrimo struggled with transitioning out of the military and drinking too much, and Clay survived an explosion that knocked him off his feet in Afghanistan and later a stroke.

Now the two are friends and part of a generation of war veterans who are waiting to see how the United States' longest conflict might end.

Some 775,477 U.S. veterans and service members have deployed to Afghanistan since the U.S. war there began after the 9/11 terrorist attacks 18 years ago this week, including 28,267 who have gone five or more times, according to Pentagon statistics released to The Washington Post. Nearly 2,400 American troops have died there, including 16 in combat action this year, and more than 20,000 have been wounded.

President Donald Trump repeatedly has vowed to bring the troops home. But on Saturday, he abruptly called off negotiations between U.S. diplomats and Taliban leaders and canceled a secret meeting planned at Camp David. It is not clear if Trump will remove some of the more than 14,000 U.S. troops who are deployed without a deal, or if talks can be jump-started.

The span of the conflict has prompted some veterans to question what has been accomplished. The nonpartisan Pew Research Center reported in July that 58 percent of veterans it surveyed said the war in Afghanistan was not worth it.

"There's a lot of mixed feelings, and just feeling, 'I don't know how I feel about it,' " DePrimo said. "Maybe this is how the Vietnam vets felt. I'd like to think that's possibly true - having the same feelings."

On a cold morning in February 2010, Clay, DePrimo and the rest of their unit - the 3rd Platoon of India Company, 3rd Battalion, 6th Marines - landed in helicopters near Marja, in the southern province of Helmand. The rural, largely desert area was home to hundreds of Taliban fighters and fields divided by muddy canals and fields that grow opium poppies in the spring.

For days, the Marines hiked to get closer to the enemy, uncertain when the fighting would start. They dug holes and shared them at night to escape the brutal cold.

"We had Marines burning their own socks to stay warm," Clay recalled.

On Feb. 13, they crossed the "line of departure" on the map marking the Marja boundary. Gunfire punctuated the air. Two explosives disposal technicians fighting alongside the platoon, Gunnery Sgt. Ralph Pate and Sgt. John Morris, disarmed more than 20 bombs early in the operation, Clay said.

The platoon escaped without any fatalities, but four Marines in the battalion of 1,000 were killed between Feb. 17 and Feb. 21.

In March, the platoon was assigned to take over a dilapidated yellow schoolhouse, which was inside a walled courtyard the size of a football field in northern Marja. Clay, a staff sergeant, was put in charge of operations on site, while his platoon commander, 1st Lt. Jackson Smith, led another part of the unit nearby.

The attacks began immediately. Squads of Marines, including one led by DePrimo, a corporal, were repeatedly ambushed with machine guns, rifles and rocket-propelled grenades a few hundreds yards from their base. Several were wounded in murky fights in which friend and foe were hard to discern, and Taliban fighters zoomed away on motorcycles.

In one hair-raising battle, insurgents shot Lance Cpl. Matthew Earle, puncturing both of his lungs. Navy Petty Officer 3rd Class Matthew Dishmon, a hospital corpsman, dragged him to safety under gunfire, earning a Bronze Star with V for his valor.

"The yellow schoolhouse, in my opinion, was my nightmare," Clay said. "Every night I'd go to bed and no one was killed, I'd thank God and hope that tomorrow was not worse than today."

By the end of the deployment in August, nine Marines in the battalion had been killed. At least 86 earned Purple Hearts for being wounded in combat.

When the unit returned home to Camp Lejeune in North Carolina, the Marines began scattering.

DePrimo left the military in May 2011, disillusioned with his options. He bounced around community colleges in South Carolina and Florida and learned to operate a crane in Georgia, though by the time he finished training he didn't want to do that anymore.

He also drank too much, to the point that he eventually quit hard alcohol, he said.

"I don't know that there was anything easy about getting out," DePrimo said of leaving the military. "I can't ever say I felt alone, but I secluded myself a lot just to kind of get away from a lot that was going on and what had transpired. A lot of it was me just not taking the right steps. It was all of the things I knew I shouldn't be doing, but it was like, 'OK, whatever.' "

Clay continued his career and graduated from drill instructor school in Parris Island, South Carolina, in June 2011 with DePrimo watching. But a few weeks later, his life changed.

While barking orders to recruits, he felt a "pop" in his head and crushing pain. He was having a stroke.

For six weeks, Clay underwent physical therapy, walking with a cane and learning how to do basic tasks such as buttoning his clothes. He recovered, but his Marine Corps career was over. Doctors told him the explosion in Marja could have been responsible.

"There's no sense in fighting it when they're going to retire you anyway," Clay said. "So be grateful and thankful that I'm still here."

Back in Marja, violence was plummeting, but the war raged on in other parts of the country.

On June 26, 2011, Pate, the Marine so admired for his work disarming bombs, was killed in an explosion in Sangin, about 70 miles northeast of Marja.

A couple weeks later, Sgt. Ian McConnell, 24, another Marine who served at the schoolhouse, died by suicide in California. Afghanistan weighed on him heavily, said his sister, Meg Schellinger, of Eagan, Minnesota.

"Even today, I'm still shocked," she said. "Yeah, he'd been pulling back and not really talking with me as much lately, but it just wasn't Ian, you know?"

As the years passed, Marja again largely fell to the Taliban.

Since returning home, some former members of the platoon have flourished, and others have struggled. Lance Cpl. Dominic Draper died in a car wreck in 2016, after surviving a roadside bomb in Marja that destroyed his vehicle while he was in its gun turret.

Smith, 34, who is now a lawyer in New Orleans, said he is proud that every member of his platoon survived the deployment and tries to remind them that they have no control over how the war has gone. He recently got engaged.

"If you try to zoom out any further in terms of, 'What's our mission here?' you get very quickly into the realm of things over which you have absolutely no control," he said. "Keeping that boundary in place is very important in terms of dealing with the bitterness that some guys may have."

DePrimo and Clay settled near each other and took jobs in Statesville, a small city north of Charlotte with an old-fashioned downtown. That they live near each other happened by coincidence, but they spend time together frequently.

DePrimo, who turns 31 this month, married a woman from his hometown of Lake Wales, Florida, becoming a stepfather to three girls before having a son in 2018. He sold cars for a while, and moved on recently to taking horticulture classes and farming. He's proud of what he and the Marines he served with did in Afghanistan.

"They were getting shot at, and they were running and shooting back at them," he said. "That's where the pride comes in for me: to know that these guys at one time all stood for the exact same thing, and they went out and they did it, and they accomplished what they were supposed to accomplish."

Since leaving the military, Clay, 36, has found happiness after divorce and remarrying, he said. He became a patrol deputy and dog handler with the Iredell County Sheriff's Department, and is quick to tell those he served alongside that he loves them.

"The sacrifices that were made, it's not that they were made in vain as long as they're not forgotten," he said. "That's the best way to put it. Things have to change. Times have to change."