Trump puts the ball back in the Palestinians' court 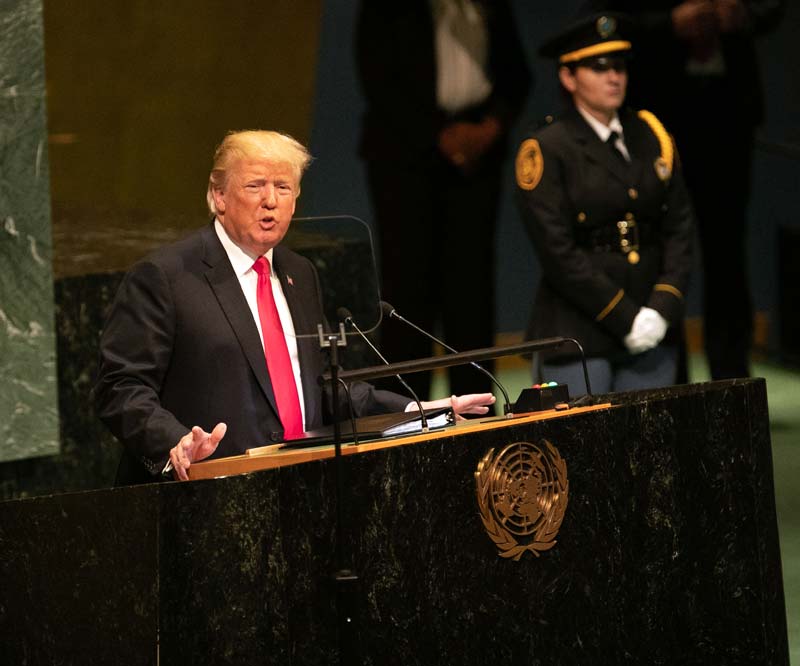 Is the two-state solution back in play? That's the upshot of the latest comment from U.S. President Donald Trump.

At the United Nations on Wednesday, Trump signaled that he was open to a two-state solution to the Israeli-Palestinian conflict. While he had previously expressed indifference as to how the conflict might be resolved—whether by one state or two—this week he said that two states is "what I think works best," and that it is going to be the way thing will work out in upcoming negotiations.

If that weren't enough, he also signaled that he was open to resuming U.S. aid to the Palestinians at some point in the future.

That's a stand that some might have thought would discomfit Israeli Prime Minister Benjamin Netanyahu. Netanyahu expressed theoretical support for a two-state solution in 2009 and took part in negotiations with former Secretary of State John Kerry towards that end in 2014. Since then he's been hostile to the notion—to the point of promising Israeli voters when running for re-election in 2015 that there would be no Palestinian state created on his watch.

But Netanyahu didn't seem bothered by Trump's statements. While he sought to dance around the issue by saying that it depended on how one defines the term, it's clear that he didn't view it as much of a threat. That's interesting because we already know that some of his coalition partners have already warned of taking down his government over that issue.

How should we interpret his seeming indifference about Trump's statements?

These discussions are part of the preliminaries before the Trump administration releases the peace plan that presidential son-in-law and senior adviser Jared Kushner has been cooking up for the last year. Undoubtedly, its premise will be, like those presented in the past, based on the idea of two states. It may not be quite as generous to the Palestinians in terms of territory as previous proposals such as the ones put forward by Ehud Barak and Bill Clinton or Ehud Olmert and George W. Bush. But at its core is the concept opposed by Netanyahu in 2015, and which his partners like Jewish Home Party leader Naphtali Bennett have sworn never to allow.

Although Netanyahu has predicted that any territory ceded to the Palestinians will—as was the case with the 2005 Israeli withdrawal from Gaza—wind up in the hands of Hamas, the prime minister isn't showing any signs of panic. That's true in spite of the fact that Trump again made clear this week that he's going to expect significant Israeli concessions in any future negotiations to compensate for the fact that the United States finally recognized Jerusalem as its capital, as well as making the first significant American attempts to hold the Palestinians accountable for their funding for terrorists and inciting hatred against Israel.

Nor did Netanyahu spend much time in his speech to the U.N. General Assembly on Wednesday about potential peace negotiations or in complaining about being maneuvered into a two-state pact that might crack up his government. To the contrary, he devoted most of his address to the ongoing threat from Iran in Syria and to supporting Trump's effort to roll back President Obama's 2015 Iran nuclear deal.

So why is Netanyahu so calm about Trump basically threatening to impose a deal that would lead to a coalition crack-up, as well as a situation that his supporters think is a mortal threat to Israeli security?

The answer is simple. It's because thanks to Trump, the ball is back in the Palestinian court as far as peace talks are concerned.

If Palestinian Authority leader Mahmoud Abbas is genuinely interested in an independent Palestinian state or in getting the United States to start forking over hundreds of millions of dollars, all he has to do is to say "yes" to negotiations. If he does so, he will be able to sit back and watch Trump pressure the Israelis to "pay" for his Jerusalem gesture with concessions that will mean statehood.

As we've known since he entered the White House, when it comes to diplomacy, Trump lusts after the glory of brokering Middle East peace and thinks that outside-of-the-box thinking will make it happen. That's why this is another golden opportunity for the Palestinians and another chance for them to prove that the only obstacle to peace is the "occupation" of the West Bank.

But despite the urgings of the Sunni Arab states to talk to Trump, every indication we've gotten from the Palestinians is that they will once again reject peace.


It's true that the state the Palestinians will likely be offered will have to be demilitarized, effectively causing them to have to give up their century-old war against Zionism. But Abbas also realizes that if he embraces Trump's offer, Netanyahu will have no choice but to accept it because he knows most Israelis are prepared for territorial concessions if they will bring real peace.

Yet the chances of Abbas taking Trump's "yes" to a state for an answer seem slim to none. The P.A. is more worried about its rivalry with Hamas than in making peace with Israel. And even the supposed moderates of Abbas's Fatah Party are also still dedicated to rejecting the legitimacy of a Jewish state, no matter where its borders are drawn. Abbas believes that he can't do as Trump has demanded, and stop paying pensions to those who murder Jews and their families. Nor has he any intention of stopping the incitement to violence that leads to murders like the recent slaying of Israeli-American Ari Fuld.

So long as the ball remains in the Palestinians' court, Netanyahu feels quite sure that he'll never have to choose between his coalition partners and his friendship with Trump. That's good news for those who oppose a two-state solution. It's also a reminder that if the Palestinians really wanted it, an independent state can be theirs. All they need to do is have the courage and the wisdom to give up their war against Israel.

Netanyahu is clearly betting they can't.