Tisha B'Av has a message for a divided, troubled America 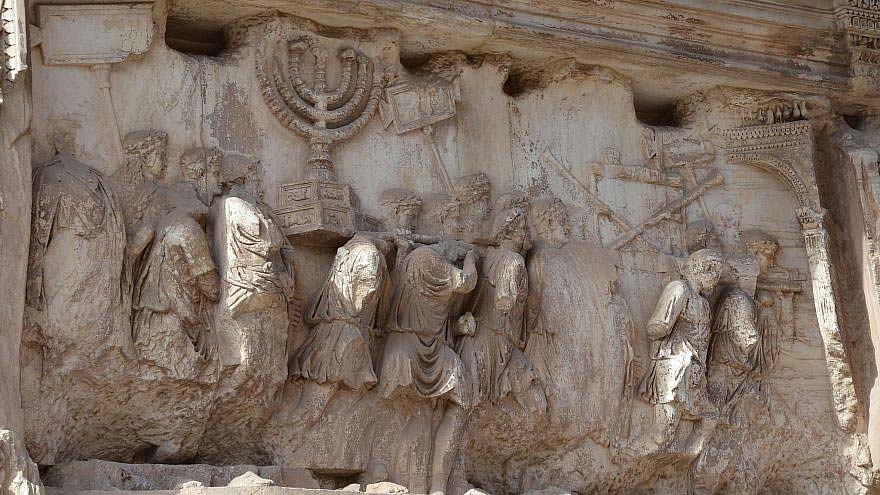 The Arch of Titus in Rome. The arch contains panels depicting the triumphal procession celebrated in 71 C.E. after the Roman victory culminating in the fall of Jerusalem, which is mourned on the Jewish holiday of Tisha B'Av.
It's the important date in the Jewish calendar that most American Jews ignore.

Tisha B'Av is the annual fast day that commemorates the destruction of the First and Second Temples in Jerusalem. It's also a date (this year, the holiday starts after Sabbath and lasts through Sunday evening) that oppressors of the Jews have used to inflict more suffering.

The terrible disasters that took place on the ninth day of the Hebrew month of Av are worth remembering and mourning. But Jewish tradition reacted to them not merely with sadness or by drawing the obvious historical conclusions about the geostrategic madness of small countries like ancient Judea fighting hopelessly one-sided wars against superpowers like Babylon and Rome.

Instead, the traditional lesson of Tisha B'Av has been fundamentally one of morals. We are taught that Jerusalem fell in the year 70 of the Common Era because of sinas chinam, or "baseless hatred" exhibited by the various rebel Jewish factions inside the city walls.

The division of the Jews and their willingness to attack each other, including the destruction of vital food supplies, made it easier for the Romans to conquer Jerusalem, setting off a bloodbath and a period of exile for most of the Jewish people.

A historian might argue that the notion that Jerusalem fell because of the lack of Jewish unity underestimates the military superiority of the Roman legions besieging the capital. Such a quibble misses the point. When nations divide into irreconcilable factions that tear each other apart like wild animals, then disasters almost always follow.

Tisha B'Av has a particular meaning for Jews since we are small people and have unfortunately spent a great deal of the last two millennia under siege (both literally and figuratively) from a hostile world where the virus of anti-Semitism continues to thrive. But most American Jews, especially those outside of the Orthodox community, tend to ignore this somber summer holiday.

That isn't to say that leading liberal Jewish groups don't sometimes employ it to try to draw attention to issues they care about. For some Jews, Tisha B'Av is like the Passover seder, which they have adapted from its original Jewish meaning to serve as a platform for contemporary concerns.

In this way, instead of mourning the destruction of Jerusalem, they lament the plight of illegal immigrants, the lack of gun-control laws or maybe even the "occupation" of territory that comprised the ancient Jewish homeland by Israel.

The impulse to update Jewish observances to make them more "relevant" for our time is usually counterproductive, as well as off-putting. But with the commemoration of Tisha B'Av this weekend, it would seem painfully obvious that the traditional message of the day is one that Americans desperately need to hear and heed.

The Trump presidency has divided the country in a way that none of his predecessors have. President Donald Trump has engaged in divisive rhetoric and helped coarsen and lower our public discourse. While he is guilty of often speaking and tweeting in a manner that seems to exacerbate our problems rather than heal them, the assumption on the part of his opponents that he is primarily responsible for an upsurge of white-nationalist hate, as well as for the mass shootings that have shocked the nation, seems rooted more in their distaste for him than objective analysis.

Those who rally against him have adopted the rude and abusive tone of Trump's rallies. The spectacle of a mob demonstrating outside of Senate Majority Leader Mitch McConnell's home calling for violence against him is no more defensible than the chants against Trump's critics.

Even worse, the criticism of Trump and the willingness to demonize him now seems to apply to anyone who might vote for him or for newspapers that might seek to report objectively about his speeches.

Much of the country is so angry about Trump and contemporary social problems that they have lost the ability to think about these issues without speaking in absolutes, in which the world is separated into two groups: those who are "resisting" Trump and those whom they deem complicit in his crimes. They even argue that opprobrium, shunning and shaming are the only proper ways to treat anyone who might support him.

Indeed, it's now reached the point where a member of Congress has thought it appropriate to dox -- or publish the names of donors to Trump so that they may be exposed to attacks -- so as to silence or drive them from the public square.

The point here is that in order for the country to be able to climb out of the partisan cesspool in which we have become stuck, both sides of the political divide have to own their share of the blame for the dysfunctional nature of our current culture. But Trump supporters think the president can do no wrong, and his opponents think he is evil incarnate and that those who support him are just as "deplorable" as the president. That is formula for not merely divisive rhetoric but potential tragedy.

That is why it would be a good thing if all Americans paused for a day this week to seriously ponder the sinas chinam that has become normative political discourse. No matter where you stand on Trump or any of the issues that divide Americans, it behooves us all to think about the cost of viewing our political foes as people that deserve to be destroyed, rather than opponents to be argued with and embraced even as we disagree.

It may seem as if we have passed the point of no return when it comes to being able to reason with each other. But the message of Tisha B'Av, in which Jews are urged to contemplate the costs of baseless hatred, is one that ought to resonate with Americans at this moment in history.