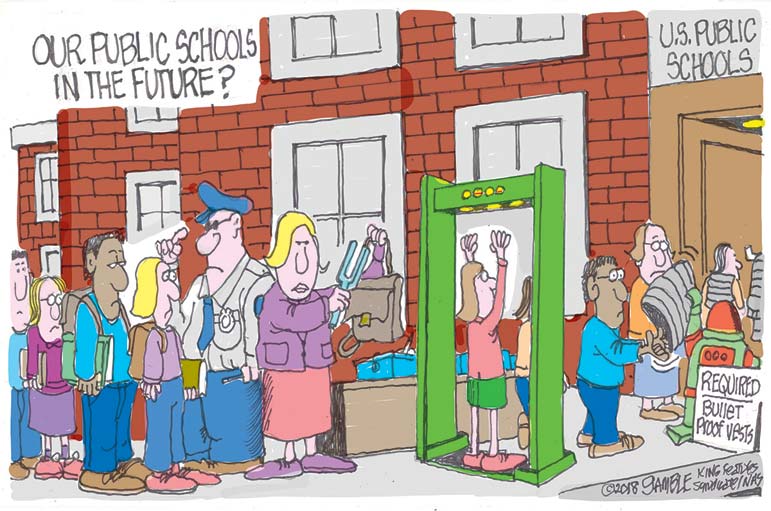 Engineers in World War I dug through the earth to build serpentine trenches borne from horrifically clear logic.

If enemy soldiers ever breached it, the zigzagging pattern would prevent them from shooting in a straight line down the length of the trench - leaving only a relative few exposed to gunfire or shrapnel.

That concept has been reinvigorated a century later, in a sense, for a western Michigan high school, to dampen the killing potential of a mass shooter.

A $48 million major construction project at Fruitport High School will add curved hallways to reduce a gunman's range, jutting barriers to provide cover and egress, and meticulously spaced classrooms that can lock on demand and hide students in the corner, out of a killer's sight.

"If I go to FPH and I want to be an active shooter, I'm going in knowing I have reduced sightlines," Fruitport Superintendent Bob Szymoniak told The Washington Post about the curved hallways. "It has reduced his ability to do harm."

The major overhaul of an existing building was driven by the ubiquity of mass shootings in the United States, Szymoniak said, citing the El Paso, Texas, killings at a shopping area this month, along with notorious school shootings at Sandy Hook Elementary School in Connecticut and Marjory Stoneman Douglas High School in Florida.

In 2018, there were 24 school shootings in which there were injuries or deaths. More than 228,000 students have been exposed to gun violence during school hours since the 1999 Columbine slayings, an analysis by The Post concluded.

The construction in Michigan is also part of a grim reality of schools methodically preparing for massacres as if they were lesson plans and quizzes.

Jefferson County schools in Colorado have given teachers buckets and kitty litter to have on hand in case children need to relieve themselves during a prolonged active shooter lockdown. Sharpies are supplied for writing the time in which tourniquets were applied, and candy helps diabetic children with low blood sugar hiding in darkness.

And this year, bulletproof backpacks are a hot back-to-school item.

"I don't know if this is the new normal, but it certainly gives cause of concern," Szymoniak said. Other features allow all doors to be locked from the front office and film applied to glass to keep it from shattering.

Classrooms will be built with a "shadow zone" where a gunman peeking in could not see students cowering along a side wall, said Matt Slagle, an architect for the project and director of K-12 projects at the TowerPinkster design firm.

The front office includes an educational Panopticon - an office administrator who will have views of the main approach, the vestibule and some of the hallways from one seat, Slagle said.

School shooters are often students themselves or are familiar with the building, though Slagle said some features, such as the locks and hiding areas, would be difficult to overcome even with inside knowledge. But that doesn't make the school invincible.

"Unfortunately that's the way things are now," Slagle said, describing mass shootings. "We'll never make it completely safe from someone who desires to cause harm."

The overhaul, which is mostly new construction, will finish in 2021, Szymoniak said, though students will arrive for class in two weeks and gradually take advantage of new spaces once they are constructed. "When we open it, it will be the most secure high school building in the state," he said.

Slagle said he was careful with his design. His firm also designs prisons, and we wanted to strike a balance between security and a welcoming presence without the pendulum swinging too far in either direction.

Szymoniak would rather be talking tests, not killers. But the latter has become a looming priority for his students and teachers.