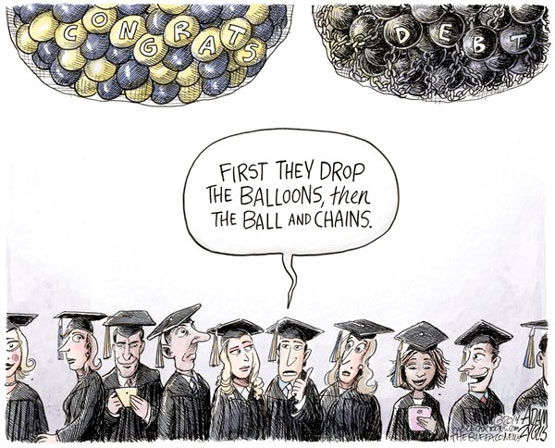 The U.S. Department of Education is accepting requests from cancer patients to have their student loan payments postponed while they undergo treatment.

The request form, released Thursday, will make it easier for patients to have payments suspended without interest accruing on their loans for the duration of treatment and for six months after it ends.

This new type of deferment is more flexible than other options. It requires the government to forgo collection of interest on a wider range of federal loans during the postponement period. There is no time limit, so borrowers whose cancer may return five years after treatment would be eligible to seek another deferment. Other options have three-year limits.

Borrowers must submit a letter from a doctor certifying they are or were receiving cancer treatment and the dates of care. Deferments will be approved for up to one year of treatment, followed by a six-month post-treatment postponement of payments. If treatment lasts longer, the patient's doctor may submit a new letter stating that.

The cancer treatment benefit applies to federal loans made on or after Sept. 28, 2018, when the law was enacted, and to loans borrowers were repaying on that date. The Education Department estimates that more than 5,000 federal student-loan borrowers will be eligible.

Thursday's release of the request form comes nearly a year after Congress passed legislation for the cancer-related deferment. The provision was signed into law by President Donald Trump in September 2018.

The Education Department said that before the agency could get the program up and running, it had to figure out how the law would apply to various types of federal loans. It also had to work with the nine contractors servicing its $1.5 trillion portfolio of student debt to retool their systems to add the deferment option.

The Education Department released a draft of the request form after four months, and it was then subject to a 60-day public comment period.

"A simple form should have had a 30-day public comment period, especially one modeled after existing deferment and discharge forms," said Mark Kantrowitz, the publisher and vice president of research of the financial aid website Savingforcollege.com. "Cancer patients can't wait for financial relief. The law was effective immediately upon passage."

Even without a request form, eligible borrowers were still entitled to the deferment, but many said loan servicers refused to take action. The Education Department instructed servicing companies to place eligible borrowers in forbearance, a type of payment postponement in which interest accrues, until the agency developed and implemented the program requirements.

Now that the form is available, borrowers may ask their loan servicers for retroactive deferment.

Despite the delay, Rep. Betty McCollum, D-Minn., who sponsored the deferment provision, said she was pleased the request form is available and was inspired to champion the measure after meeting a young veteran struggling to pay her student loans while out of work and receiving chemotherapy.

"These students were stressed and squeezed between paying medical bills or paying student loans, while at the same time receiving cancer treatment," McCollum said. "This is a real success story for the 70,000 young adults diagnosed with cancer each year who can now defer their student loans, focus on beating cancer, and then return to their academic life."