McCarthy quietly wages the other midterm campaign --- for House speaker 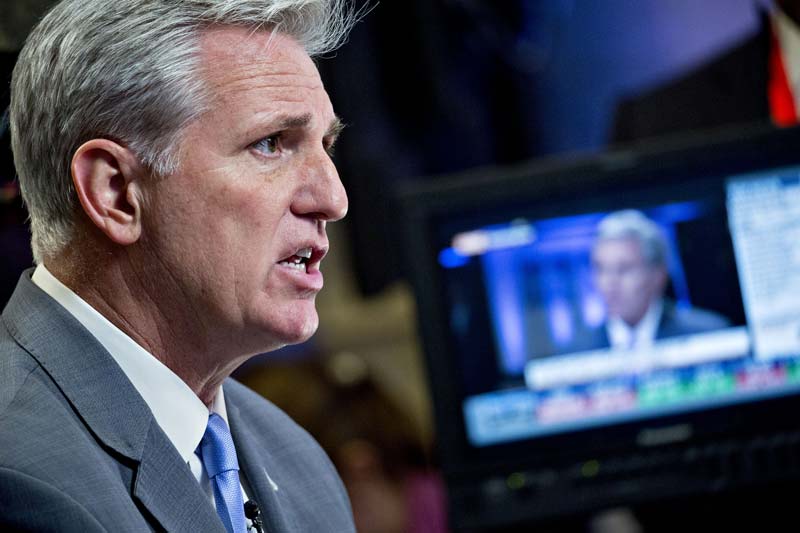 DES MOINES, Iowa - House Majority Leader Kevin McCarthy is hardly the first politician with national aspirations to find himself flipping pork chops here at the Iowa State Fair. But it's the speaker's gavel, not the presidency, that has brought the California Republican to the Pork Tent.

Donning a red monogrammed apron and standing alongside Rep. David Young - a two-term GOP incumbent in a toss-up Iowa district Democrats are targeting as part of their effort to win control of the House - he mugs for a local news photographer as the two lawmakers wield spatulas and munch on batons of brown-sugar pork belly.

"Have you had this bacon on a stick yet?" McCarthy asks Iowa Gov. Kim Reynolds, a Republican who has attended her share of state fairs. "They're fantastic."

McCarthy's appearance at this well-known hotbed of political ambition reflects a simmering battle over the future of the House Republican leadership, and the 53-year-old lawmaker is seeking to make it clear that he intends to remain atop that hierarchy.

He has spent his August trekking across the country, campaigning with embattled candidates in multiple states, adding to a fundraising haul that already exceeds $40 million for the election cycle and doling out advice, encouragement and occasional ultimatums to the Republicans who will determine whether the GOP will hold on to its precarious 23-seat majority.

If he is successful, McCarthy is confident he will have a bulletproof case for the speaker's gavel: With the head winds of political history, an unpopular president and an energized Democratic electorate standing against the GOP, no one did more to keep Republicans in power.

"I've always believed the person who works the hardest, there will be something better for you," he said before his appearance at the fair. "Surpass expectations, and there'll be another opportunity."

But McCarthy faces persistent doubts among the most conservative GOP voters, who have long seen him as part of an establishment that has sought to sideline their views. That sentiment derailed a previous bid to become speaker in 2015, when he was forced to step aside amid a revolt from the hard-line House Freedom Caucus, clearing the way for Paul Ryan, R-Wis., to get the position.

He now has Ryan's endorsement after the speaker announced he would exit, and much has changed: The party is dominated by President Donald Trump, and McCarthy enjoys perhaps the closest personal relationship with the president of any member of Congress.

Even before his inauguration, Trump singled out "my Kevin" as a key confidant, and McCarthy has cultivated the relationship ever since with late-night phone calls, polling insights and gifts of candy.

But friendship with the mercurial president may not be a guarantee of a leadership promotion. Conservatives are still agitating for more power within the House GOP, and one of their most prominent leaders, Rep. Jim Jordan, R-Ohio, announced last month that he will seek to become speaker. And some lawmakers, even those who could never support a firebrand like Jordan, are quietly wondering whether House Majority Whip Steve Scalise, R-La., would be a better fit.

McCarthy is trying to snuff out those doubts with hard work, personal bonds and a flood of campaign cash. While the man from Bakersfield prides himself on a data-driven, Silicon Valley mind-set, he is playing the quintessential inside game, racking up political IOUs to call in when the time comes.

"When I decide who I'm going to support for speaker, one of the fundamental questions is, what has this person done to help us keep the majority? A lot of people will be asking that question," said Rep. Richard Hudson, R-N.C., a McCarthy ally. "I think the obvious answer is, if it weren't for Kevin McCarthy, we wouldn't even be having a conversation about whether or not we keep the majority."

While political forecasters increasingly see worrying signs for Republicans, with some declaring it likely that they will lose their House majority, McCarthy insists the party is not facing anything akin to the 63-seat Republican landslide he helped orchestrate in 2010. Instead, he's fond of pointing to 1998, when Democrats picked up seats despite a scandal-tarred President Bill Clinton, thanks to a strong economy and GOP missteps.

"This could be a tornado, but it won't be a wave," he said. "A tornado touches down in spots. A wave crashes over everybody."

He acknowledges Republicans face head winds but sees a manageable problem - one, he says, that can be solved with a heavy focus on women, the college-educated and seniors.

That, however, encapsulates the whole problem the GOP faces: Women and the college-educated have turned sharply against Trump, and Democrats are readying a relentless campaign targeting seniors by calling the GOP tax bill a prelude to Medicare cuts.

The centerpiece of his fundraising effort is Protect the House, a joint fundraising committee that McCarthy formed with Vice President Mike Pence, the National Republican Congressional Committee and 24 vulnerable House Republicans. The group had raked in more than $13 million as of June 30, and a scheduled Aug. 27 fundraiser featuring Trump at his Washington hotel stands to double that.

McCarthy "has really stepped it up very quickly and shown that he can do it, and our donors have confidence in him," said Rep. Tom Graves, R-Ga., another ally.

In Des Moines, McCarthy does a local news interview alongside Young during his swing through the fair, fielding questions on Trump's trade policies - a huge concern in a state where dips in crop prices have left voters and the politicians who represent them nervous. McCarthy assures a corn farmer that, yes, Congress will be sure to pass a farm bill by October, when key subsidy programs expire.

Young is facing his third consecutive toss-up race, but he has never run in a national environment this favorable to Democrats. He faces Cindy Axne, a small-business owner and former state government official who outraised Young in the most recent fundraising quarter.

While Young has reported more cash on hand, he said he is happy to have help from McCarthy in a difficult year. "There's some races where a lot of folks have just kind of cut bait," he said. "Him being here is kind of testament for me as to how hard I'm working and the job that I'm doing here. That attention is appreciated."

As for securing his leadership vote, Young said, "It doesn't hurt, but it's not a dealmaker."

Besides cozying up to Trump - a figure he once said privately he suspected of taking payments from Russian President Vladimir Putin - McCarthy has sought to strengthen his standing with conservatives by pushing for House action on spending cuts and hard-line immigration measures. He keeps a busy schedule of conservative-media appearances, winning a recent speaker endorsement from influential radio host Michael Savage. And at least a handful of Freedom Caucus members have warmed up to him; one, Rep. Rod Blum, R-Iowa, is part of Protect the House.

But Trump has also elevated McCarthy's potential leadership rivals. He has frequently praised Scalise as the whip has recovered from the gunshot wound suffered last year from a would-be assassin. (The president called Scalise the "legend from Louisiana" during this year's State of the Union address.) Jordan, too, has been an object of Trump's praise, particularly for his efforts to undermine the pending federal investigations into the Trump campaign's alleged ties to Russia and potential obstruction of justice.

Adam Brandon, president of FreedomWorks, a grass-roots-oriented conservative group that has endorsed Jordan, said that McCarthy's approach to climbing the leadership ladder is outdated.

"That's the old-school approach, but I think we're watching the Republican Party morph in front of our eyes," he said. "If you thought the Republican Congress got enough done, Kevin McCarthy is your man. But if you ran as a conservative and you're not getting stuff done . . . then you've got to change, and there's no one who is more of a change agent than Jim Jordan."

While McCarthy spends weeks on the road building relationships with colleagues, Jordan and Scalise have played a more outside-oriented game, raising their profiles among conservative voters who can exert pressure on rank-and-file lawmakers as they consider their speaker votes. Both in recent months have been fixtures on conservative media, starting with Fox News Channel programs.

Scalise - who is publicly backing McCarthy but has not ruled out a speaker run if McCarthy falls short - has also spent his August on the road, traveling to 12 states on behalf of roughly two dozen House incumbents. Next week, he is set to hold a major New Orleans fundraiser with Pence to benefit vulnerable colleagues.

All three Republicans are targets in a top Democratic super PAC digital ad launched Friday. The spot highlights allegations that Jordan ignored sexual abuses claims while a young Ohio State University wrestling coach, Scalise's past appearance before a group with white-supremacist ties, and uncorroborated allegations that McCarthy has an extramarital affair that surfaced during his 2015 speaker bid.

McCarthy brushes off the political attacks. What the self-styled next-generation GOP leader bristles at, however, is the notion he is running an old-school playbook.

"Who else sat there and worked at what comes to the floor and how to pass it?" McCarthy asked. "Members are the only ones who can vote. They're going to look at who helped them, who was in the process, who was able to make it happen."

• 08/10/18 Pelosi is the star of attack ads, worrying Dems upbeat about midterms