Pelosi is the star of attack ads, worrying Dems upbeat about midterms 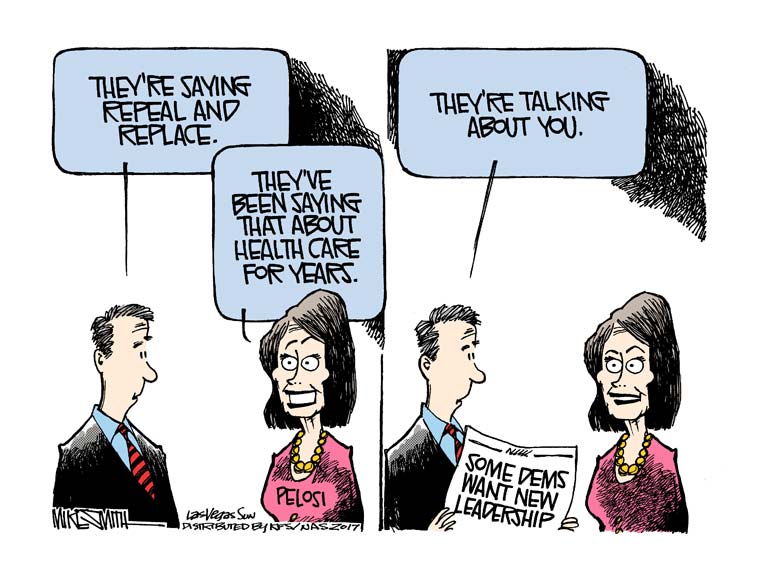 WASHINGTON - While Democrats grow optimistic about their chances of taking control of the House in November, they are increasingly anxious that the presence of their longtime and polarizing leader, Nancy Pelosi, is making it harder for many of their candidates to compete in crucial swing districts.

Republicans, clinging to a 23-seat majority in the House, have made the House minority leader a central element of their attack ads and are portraying many of their opponents as inextricably tied to the liberal from San Francisco. At the same time, some Democrats are expressing alarm that she is standing in the way of the next generation of leaders.

The tension was apparent Thursday, when Rashida Tlaib became at least the 27th Democratic House candidate to decline to say whether she would support Pelosi. Some Democrats fear that anti-Pelosi attacks aimed at the Democratic candidate in this week's special election in an Ohio congressional district helped push the Republican to a narrow lead.

The dynamic creates a conundrum for Democrats, many of whom rely on Pelosi's fundraising prowess and admire her political savvy and status as one of the country's most influential female leaders. But some also are beginning to speak out about how allowing Pelosi to remain in charge of the caucus could reduce the size of a Democratic wave in November or worse, imperil their ability to win the majority.

"People pretend that it isn't a problem, but it's a problem that exists," said Rep. Brian Higgins, D-N.Y., who said he heard from frustrated colleagues this week concerned that the anti-Pelosi messaging cost Democrats in Ohio.

The tension is exacerbated by a growing generational rift in the Democratic caucus, with younger candidates and members looking to assert themselves against a leadership team that includes Pelosi, 78, and her top lieutenant, 79-year-old Minority Whip Steny Hoyer of Maryland. Among the Democratic candidates who have declined to endorse Pelosi is Alexandria Ocasio-Cortez, the 28-year-old Democratic Socialist from Queens who has become a national star of the party's left wing.

Tlaib, of Michigan, said it was time for a generational change, telling CNN Thursday that her constituents "don't feel like they're being heard, and I think that starts at the top with leadership."

Republicans say Pelosi, who is well-known among voters from her four years as House speaker starting in 2007 and who wants to reclaim the job, continues to be a reliable shorthand for a liberal Democratic agenda.

About a third of Republican ads in the Ohio race mentioned or depicted Pelosi, and GOP strategists argued that Democratic candidate Danny O'Connor's last-minute equivocating on the Pelosi question was a deciding factor.

Pelosi and her allies pointed to the top-line reality of Ohio: A district that voted for Trump in 2016 by 11 points and for Republican congressional candidates by much bigger margins swung decisively to Democrats. The GOP's reliance on anti-Pelosi messages, they say, reflects an inability to find any other effective issue - and to the extent she is a factor at all, her role is dwarfed by that of the president.

"Trump is the only figure who looms large over the midterms," said Pelosi spokesman Drew Hammill. "At the end of the day the midterms are about the president and his party, especially when they're in control of every branch of government."

Pelosi has long touted her ability to navigate the complex internal politics of her caucus. "I think I'm worth the trouble, quite frankly," she said last year after Democrats narrowly lost a Georgia special election where she was a centerpiece of GOP attacks.

Still, Democratic candidates across the country are being pressed about whether they support Pelosi, and regardless of how they answer, they are being subjected to GOP attacks tying them to her.

On Wednesday, the biggest Republican super PAC focusing on House races debuted an ad against Kansas candidate Paul Davis - one of more than two dozen House Democratic candidates who have openly spurned Pelosi - declaring that "a vote for Paul Davis is a vote for Nancy Pelosi."

Ken Spain, a Republican political consultant, said Democrats are "going to leave seats on the table" as long as Pelosi remains a viable face of their party.

"In a race that was decided by 1,000 or 1,500 votes, that was probably a difference- maker," he said. Even if Democrats win the House in November, he added, "it could be the difference between having a razor-thin majority and a governing majority. It's a lot easier to move legislation when you have a cushion of votes to work with."

In the Ohio race, outside Republican groups aired ads on a variety of themes - taxes, opioids, education, health care and seniors. But Pelosia ds dominated, especially in the final week.

O'Connor said early on that he did not support Pelosi remaining as the top Democrat in the House - echoing the stance of Conor Lamb, the Pennsylvania Democrat who won a March special election in a GOP-leaning district.

But GOP attack ads targeting O'Connor still highlighted Pelosi, and he gave those attacks fresh oxygen a week before Election Day when, under persistent questioning during an MSNBC interview, he conceded he would vote for Pelosi as speaker if the choice were between her and a Republican.

Higgins said Democratic candidates, especially in Republican-leaning districts, are trying to "customize their appeal" to their particular races, and the Pelosi questions complicate that task: "They are stuck with that question, and they do not deal with it well. You equivocate, and it jams you up, and it costs you votes," he said.

A GOP operative familiar with private Republican polling said the numbers turned toward Republican candidate Troy Balderson after O'Connor's MSNBC remarks - during a period that also included Trump's rally in the district and an ad from Ohio Gov. John Kasich, R. A Democratic campaign official said that they did not see any movement in their polling in that time frame.

Jesse Hunt, a spokesman for the National Republican Congressional Committee, said GOP officials saw no evidence in Ohio that Pelosi attacks have lost their potency.

"When Nancy Pelosi becomes a central part of the discussion in any race, that is something we're winning on because we're not just talking about her, we're talking about her policies," Hunt said.

Asked by CNN Wednesday if Pelosi had hurt his campaign, O'Connor returned to his preferred way of discussing the Democratic leader: As a figure from the past who needed to move aside.

"It tells me that folks are ready for a new generation of leadership," O'Connor said.

Tlaib, who also is looking for a change, previously expressed reservations about Pelosi in an April interview with the Hill, citing her role in pushing former congressman John Conyers Jr., D-Mich., out of Congress over sexual harassment allegations.

Abigail Spanberger, running against GOP incumbent Dave Brat in the suburbs of Richmond, Virginia, told the New York Times in an article published Thursday that "under no circumstances" would she support Pelosi for speaker.

Republicans have gotten little political traction from their tax cuts, as other economic changes - rising gas prices and blowback from Trump's tariffs - have offset any financial lift. Instead, as a three-month sprint to November begins, Republicans are focusing on the fear of "open borders," tax increases, the MS-13 gang, and Pelosi back in charge, overseeing a liberal caucus.

Rep. Ben Ray LujĂˇn, D-N.M., chairman of the Democratic Congressional Campaign Committee, said that whether trained on Pelosi or any other issue, the Republican message has failed to resonate with voters.

"Week after week, Republicans claimed to have a new silver bullet or line of attack against Danny O'Connor, yet his positive image only strengthened over the course of the election," he said. "Republicans are on the brink of losing the House, and they are flailing."

Pelosi has been careful recently to keep her party's message focused. She has not embraced calls for Trump's impeachment; nor has she offered any actual support for a growing campaign on the left to eliminate the Immigration and Customs Enforcement agency. But Republicans say that, in the eyes of voters, Pelosi's name is shorthand for extreme liberal policies - even those she does not personally support.

"To the average American - not the average Republican, the average American - Nancy Pelosi and her San Francisco liberal values are completely removed from reality," said Corry Bliss, executive director of the Congressional Leadership Fund super PAC, citing focus-group research. "That means the resistance movement and everything that comes along with it - raising taxes, getting rid of ICE, trying to impeach Trump."