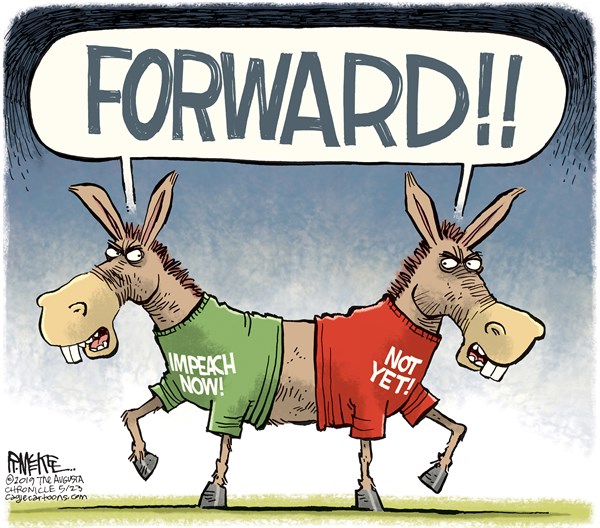 WASHINGTON - House Democrats are struggling to figure out their next move against President Donald Trump after their highly anticipated hearing with Robert Mueller III fell flat, forcing some Democrats to second-guess their strategy while aggravating divisions in the party over impeachment.

Several centrist Democrats seized on the absence of a major revelation to argue it was time to end House investigations into whether Trump tried to obstruct the former special counsel's probe and pivot to legislation.

"Anyone who was looking for the smoking gun yesterday didn't get it," said Rep. Anthony Brindisi, D-N.Y., who ousted a Republican incumbent by fewer than 500 votes in last year's midterm elections. "It's time to move on and focus on getting some bills passed here that can get signed into law."

But that plea had no effect on the pro-impeachment Democrats, who dug in, insisting that House oversight of Trump and his administration has been ineffective and pressed for launching proceedings.

In a closed-door caucus meeting Wednesday night, after Mueller's testimony, proponents tried to convince House Speaker Nancy Pelosi, D-Calif., to move ahead on impeachment, a step she has resisted.

"There's no question that if we're serious about accountability, we put our strongest foot forward to get information and enforce subpoenas to shape this narrative," said Rep. Jared Huffman, D-Calif., who complained that the House's current strategy was a "slow-walk."

He said it was a mistake for Democrats to rely on Mueller - a 74-year-old reluctant witness who had made clear that he would not provide the blockbuster moment the party craved - to make their case to the public.

"We are not potted plants. We can actually shape some of this public sentiment," Huffman said. "We're not powerless, and I just think we've got to get much more serious about doing that part of our job."

The divisions over next steps come as House Democrats face criticism over their seven months of multiple investigations that have yielded little new information that would build public support for ousting Trump. Outside liberal groups are furious with Pelosi. Other Democrats, including several who worked for President Barack Obama, have expressed frustration with the House's inability to hold accountable what they consider a lawless president and administration.

Ninety-eight Democrats have backed impeachment, according to a count by The Washington Post. The number amounts to 42 percent of the Democratic caucus.

Mueller's six hours of testimony did not help their case, many Democrats said privately. Some wondered whether they had miscalculated in focusing so much on the former FBI director and less on subpoenaing witnesses in Mueller's report and asking the courts to force them to testify.

"I didn't see anything amazing. I mean, did you?" said centrist Rep. Jeff Van Drew, D-N.J. "He looked tired."

Among Democrats, perhaps the most disappointed in Mueller's performance were members of the Intelligence and Judiciary committees, who questioned the former special counsel, according to conversations with several who spoke on the condition of anonymity to speak frankly. Many felt blindsided that no one warned them how much Mueller had aged - and regretful that they had forced a decorated Vietnam veteran and longtime civil servant into testifying when he was so reluctant in the first place.

"I was beyond shocked," one lawmaker said of Mueller's occasional confusion and seeming unfamiliarity with details of the report.

Even pro-impeachment Democrats agreed that the testimony may not have helped their case, with Rep. Lloyd Doggett, D-Texas, saying, "I don't think it was a Eureka moment," and Rep. Daniel Kildee, D-Mich., adding: "I haven't seen anything . . . that indicates this is a turning point."

"In order for us to move toward impeachment, we'd have to change the electorate, and I don't think that necessarily happened in a big way yesterday," said Rep. Jan Schakowsky, D-Ill., another impeachment supporter and a Pelosi ally.

Most notably, House Intelligence Committee Chairman Adam Schiff, D-Calif., who elicited several of Mueller's criticisms of Trump at the hearings, sharply played down the prospects of removing the president through impeachment.

"We do need to be realistic, and that is, the only way he's leaving office, at least at this point, is by being voted out, and I think our efforts need to be made in every respect to make sure we turn out our people," Schiff said during an interview on CNN.

Lawmakers had negotiated for several weeks to obtain Mueller's public testimony and even postponed the hearings one week to ensure an extra hour of questioning for members of the Judiciary Committee.

As Mueller faced criticism for his halting testimony, some who knew or worked with him defended the performance. They conceded that while Mueller might not have been at the pinnacle of his sharpness, he and his investigation should not be judged on his oratorical prowess.

"While some of his responses might have been more crisp and expansive, his performance has no bearing on the reliability and integrity of the investigation," said one person familiar with the case who spoke on the condition of anonymity to speak frankly.

The person noted that Mueller's team had charged more than 30 people with federal crimes and secured guilty pleas from seven, and that Mueller "was the team leader and responsible for virtually every facet of the investigation" The person said Mueller "has a full command of those facts, and to suggest otherwise is just plain wrong."

Despite disappointment in Mueller's testimony, Democrats feel pressure from the party's left to move quickly, before the 2020 presidential campaign ramps up further.

"All of our efforts to put the facts before the American people . . . have been met with unprecedented stonewalling and obstruction," Clark said in a statement. "That is why I believe we need to open an impeachment inquiry that will provide us a more formal, focused way to fully uncover the facts."

Shortly after Mueller's testimony on Wednesday, impeachment dominated a Democratic caucus meeting. House Judiciary Committee Chairman Jerrold Nadler, D-N.Y., who is facing a primary challenge, once again talked of initiating an impeachment inquiry after Pelosi laid out her strategy of continuing to fight the Trump administration in court.

Several Democrats expressed concerns about what they would tell their constituents about next steps after Mueller had publicly confirmed all his findings in his report. Rep. Ro Khanna, D-Calif., asked whether it was possible to start impeachment proceedings without forcing moderate lawmakers who might face political blowback from voting on it.

Nadler said they could, suggesting his committee could begin drafting articles of impeachment. Nadler also argued that public sentiment was against impeachment when the House Judiciary Committee started its proceedings against President Richard Nixon in 1974 over the Watergate scandal, but support grew through the hearings.

That comment was seen as a swipe at Pelosi, who has argued that the public must support impeachment first before Democrats act. Although Pelosi was noncommittal in the meeting, she made her preference known while speaking to reporters later.

"We are fighting the president in the courts," she said.

Separately, other committees are pressing ahead with their investigations of the administration.

The House Oversight Committee on Thursday voted to authorize subpoenas for White House work communications sent via personal email and cellphone amid questions about whether the president's daughter Ivanka Trump and her husband, Jared Kushner, violated federal record-keeping laws.

Pelosi's embrace of investigations and the courts reflects her intent to protect Democrats who prevailed in Republican-held districts and helped the party win the majority in last year's elections, like Brindisi and Van Drew.

That strategy has the backing of moderate members such as Rep. Luis Correa, D-Calif., a leader of the conservative Blue Dog Coalition. "I don't think it's time for impeachment. I think it's time we continue to drill down," he said.

Still, Democratic leaders have altered their talking points, according to senior aides familiar with the discussions. Facing pressure from the left, leaders decided to soften their pushback on impeachment, keeping the door open.

They also gave Nadler long-sought approval to go to court to try to force former White House counsel Donald McGahn to testify and to sue the administration for grand jury information in Mueller's report.