Get ready, America: Vehicles as weapons of terror are coming here, too 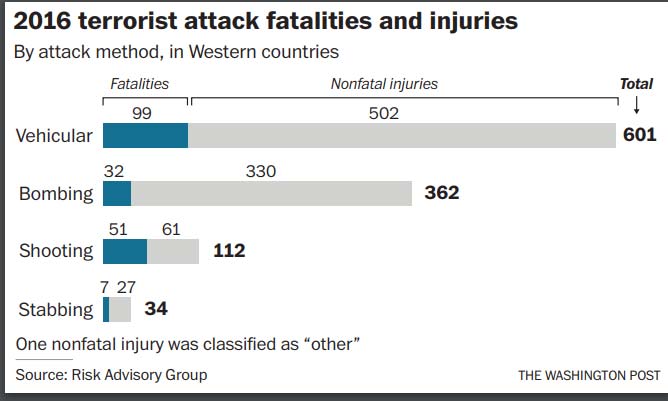 Last month, attackers using a vehicle and knives killed eight people and wounded dozens more on London Bridge. Over a couple weeks later in an incident nearby, a man drove into people leaving mosques after Ramadan services, killing one and injuring 10.

And in May, a man driving in New York's Times Square plowed into a crowd during lunchtime, killing one person and injuring 22. While authorities said the incident was not terrorism, the Islamic State, inspired by the crash, used it to warn that more attacks on the nation's largest city and popular tourist destination would follow.

As terrorists overseas increasingly turn to vehicles as weapons, cities across the United States, concerned such attacks could happen here, are ramping up security in public spaces to protect areas with heavy pedestrian traffic.

Bollards and security barriers, as well as increased police presence at events, are among some of the strategies cities are using to guard against such attacks. In Las Vegas, 700 bollards are being installed along the Las Vegas Strip this year at a cost of $5 million in what has been called "a matter of life and death" to protect innocent bystanders from deliberate acts to use vehicles as weapons. Although there is no specific threat, authorities said recent terrorist propaganda featuring snapshots of the Las Vegas Boulevard cannot be overlooked. Each barrier is designed to resist a 15,000-pound, 30-foot vehicle, officials said.

In New York, officials have been calling for the installation of more bollards, citing the ones that stopped the speeding sedan in the May incident. The Los Angeles City Council, meanwhile, will vote this summer on whether to direct the police department and other agencies to issue a report on mitigation methods for vehicle attacks.

Transportation planners are exploring innovative ways to use landscaping to create buffers between roadways and sidewalks. Security companies say they are being consulted on how to protect main streets.

"Big cities are realizing that they could have a mass casualty event on all four sides of an intersection at any time," Reiter said.

Attacks with vehicles used as improvised weapons became the single most lethal form of attack in Western countries for the first time last year, according to the London-based Risk Advisory Group, which keeps track of every terrorist attack worldwide. Just over half of all the terrorism-related deaths in the West were the result of vehicle-ramming attacks, the data show.

In the most deadly one, in Nice, France, a truck mowed down dozens of people celebrating Bastille Day last July, killing 87 and injuring 434. On Dec. 19, 12 people were killed and 56 injured when a man drove a truck into a Christmas market in Berlin.

In the United States, a man inspired by the Islamic State drove into students at Ohio State University last fall, then emerged with a knife, injuring 11 people.

Experts say Europe will probably continue to experience such attacks because of the ease with which they can be carried out. As countries have stepped up security and counterterrorism efforts, terrorists have found it more difficult to strike using traditional means. It is easier to rent a truck than to acquire explosives or firearms without raising suspicion.

"It is much more nebulous. It is much more spontaneous," said Henry Wilkinson, director of intelligence analysis for the Risk Advisory Group, which keeps track of terrorist attacks and provides security assessments for large events.

Views are mixed on the risk of such attacks in the United States, where so far there has been only one terrorism-related vehicle attack.

"Obviously, the United States has invested huge sums of money and time and resources into its counterterrorism program and the scale of intelligence collection and training and other things reduces the threat significantly," Wilkinson said.

The availability of firearms in the United States makes it more likely that would be the weapon of choice, he said.

A Canadian man who yelled the Arabic phrase "Allahu akbar" before allegedly stabbing an airport police officer in Flint, Michigan, last month was indicted Wednesday on charges of committing an act of violence at an international airport and interfering with airport security, in what authorities say was a possible act of terrorism. But most acts of terror on U.S. soil, including several domestic terrorist attacks, have involved firearms and explosives. The 2015 San Bernardino, California, terrorist attack, which killed 14 people and injured more than 20, was a mass shooting.

"If someone was inclined to go and carry out a terrorist attack, it seems more logical that one would use the effective way of carrying out that attack, and if given choice between using a car and a machine gun, you will probably use a machine gun," Wilkinson said.

Still, U.S. law enforcement officials say the threat of such attacks is real. In an advisory issued in May, the Transportation Security Administration alerted the nation's trucking companies about the rising risk of rental trucks and hijackings and thefts for purposes of such an attack. The agency urged vigilance as terrorist groups continue to employ the less sophisticated tactics, which can be carried out with minimal planning and training, but have potential to inflict mass casualties.

"No community, large or small, rural or urban, is immune to attacks of this kind by organized or 'lone wolf' terrorists," the TSA report said.

From 2014 through April of this year, terrorists carried out 17 vehicle ramming attacks, killing 173 people and injuring 667, the report said. While the statistics represent only a fraction of all casualties from terrorist attacks worldwide, the potential for mass casualties and difficulty for law enforcement in planning for or preventing such attacks makes them attractive for would-be terrorists.

In the 1990s, barriers were designed to protect from car bombs after the 1998 vehicle bombings at U.S. embassies in East Africa. The use of barriers, such as bollards, skyrocketed after the Sept. 11, 2001, terrorist attacks as officials sought to protect federal buildings and increase security at potential targets, such as airports and stadiums.

The latest threat has cities in Europe, Australia and North America making new investments, from barriers along a number of bridges across the River Thames in London to retractable bollards in the tourist area of Surfers Paradise in eastern Australia. Vehicle barriers along roads around the All England club were among the enhanced security measures surrounding Wimbledon this week.

In Washington, D.C., which is filled with high-profile targets as the nation's capital, law enforcement officials would not discuss specific tactics, but acknowledged that they are pursuing various means to protect pedestrians, including the installation of more bollards on city streets.

"We are always trying to stay a step ahead of these terrorists," Assistant D.C. Police Chief Jeffery Carroll said.