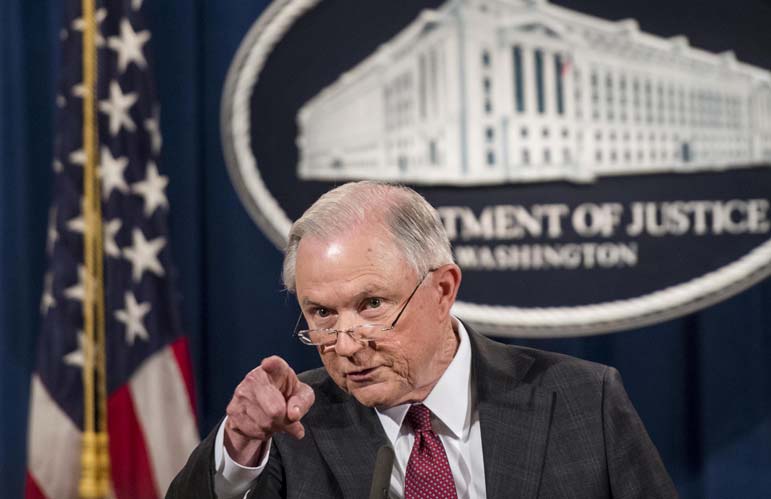 WASHINGTON - A bevy of congressional Republicans are warning President Donald Trump not to move against Attorney General Jeff Sessions in what many fear could be a prelude to the dismissal of special counsel Robert Mueller, who is probing Trump's ties to Russia.

Trump's public criticism of Sessions has mounted in recent days, starting with a tweet Saturday morning asking why Sessions and Mueller have not investigated alleged "crimes" by former Democratic presidential candidate Hillary Clinton and by former FBI Director James Comey, and culminating in a tweet early Tuesday accusing Sessions of taking "a VERY weak position" on investigating Clinton and leakers of intelligence secrets.

The attack Tuesday prompted an outpouring of support for Sessions among his former colleagues in the Senate, where he served for 20 years before resigning to become attorney general, and left scores of other Republicans aghast at Trump's willingness to attack one of his most loyal campaign supporters.

"I don't think it helps to throw your own people under the bus," said Rep. Tom Cole, R-Okla. "If you think you need to make a change, call him in, have the discussion, make the change. But I don't think these sorts of public floggings are very helpful."

"This is the first person who stuck his neck out for Donald Trump, who was with him through thick and thin," he said. "And now, even if the president has disagreements with him - which I think are ill-founded, self-centered and wrong - you don't ridicule him in public. Someone who is your close friend? That speaks to character."

Schumer raised openly what many Republicans fear privately - that Sessions's dismissal would be a first step toward Mueller's firing. Sessions has recused himself from Russia-related matters because of the meetings he had taken with Russian Ambassador Sergey Kislyak and cannot dismiss Mueller, but his successor would not be so constrained.

"Many Americans must be wondering if the president is trying to pry open the office of attorney general to appoint someone during the August recess who will fire special counsel Mueller and shut down the Russia investigation," Schumer said.

House Speaker Paul Ryan, R-Wis., declined Tuesday to make a definitive statement regarding Sessions, telling reporters, "It's up to the president to decide what his personnel decision is and any possible fallout that comes from that."

And de avoided making a direct statement on Mueller's future a day after defending the special counsel in a Wisconsin radio interview. Asked on WISN-AM about an investigation that is "becoming an obvious witch hunt," Ryan moved to rebut that Trump-inspired line of attack.

Most GOP lawmakers kept their focus Tuesday on Sessions. Those standing up for him included some of Trump's most loyal supporters on the political right who fear the loss of a trusted ally on immigration and law-and-order issues.

"Jeff Sessions is far and away the best possible person to be our attorney general in the United States of America," said Rep. Steve King, R-Iowa, an outspoken Trump supporter. "There is no one who could replace him who would follow through and finish out the Trump agenda."

Were Sessions to be cashiered, King said, "this would be an amputation of his own immigration and rule-of-law agenda that would be a massive disappointment to the conservatives of America."

Rep. Mark Meadows, R-N.C., chairman of the hard-right House Freedom Caucus and a lawmaker with a direct line into Trump's inner circle, said the president's criticism of Sessions "shows the growing frustration of this whole Russia thing."

"The president knows he's innocent and doesn't have people defending him," he said, adding, "I do think the attorney general has been very loyal."

"Jeff Sessions is a man of integrity, loyalty, and extraordinary character," said Sen. Richard Shelby, R-Ala. "I join the people of Alabama in giving Jeff Sessions my deep respect and unwavering support."

Senate Majority Leader Mitch McConnell, R-Ky., told reporters that Sessions "is doing a fine job" and that he "made the right decision to recuse himself" from the Russia probe.

Sen. Rob Portman, R-Ohio, called Sessions "a man of deep conviction and principle who believes in the rule of law" and "always has the best interests of our country at heart," while Sen. Lindsey O. Graham, R-S.C., called him "a rock-solid conservative" and called Trump's tweets "highly inappropriate."

Rep. Mo Brooks, R-Ala., who is seeking the Senate seat Sessions once held and has sought to closely align himself with Trump, called the president's attacks "most distressing."

"I'm in a difficult position," he said. "On one hand, I'm very supportive of President Trump's policy agenda. On the other hand, I've been good friends with [Sessions] for more than two decades and I just hate to see this kind of conflict between the two of them."

Brooks declined to speculate on how he or his Republican colleagues might respond if Trump takes aim at Mueller. But other lawmakers were willing to explore the scenario.

Some warned that a move against Mueller could represent a turning point for rank-and-file Republicans who have endured various Trump controversies in hopes of passing a conservative legislative agenda.

Cole said firing Mueller "would be a huge mistake" and offered some unsolicited advice: "Don't throw a hand grenade down here on Capitol Hill and think you're not going to get some splinters yourself."