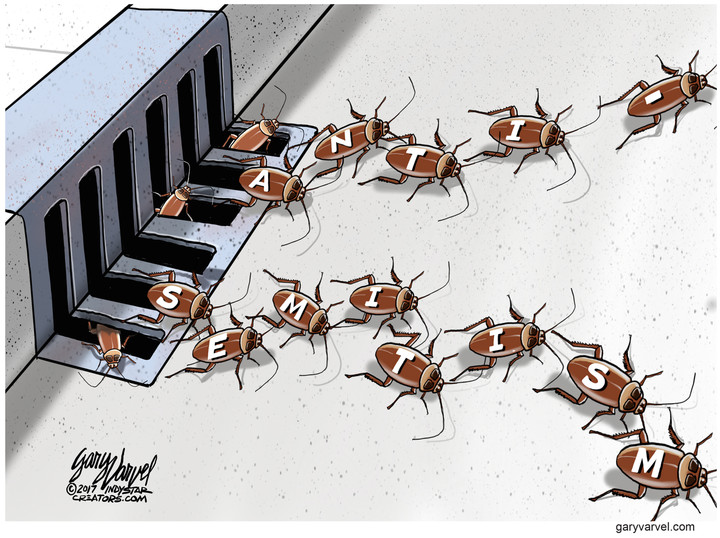 Michelle Goldberg is worried. The New York Times columnist has watched as some in the Jewish community and elsewhere have connected the dots between anti-Jewish ideological incitement and anti-Semitic violence.

Incidents involving vandalism, verbal abuse and violence against Jews are on the rise across the country, and even the Anti-Defamation League and other liberal groups aren't even bothering to try to link them to former President Donald Trump as they did during his four years in office, regardless of the merits of their accusations.

This time there's no trying to pretend that all anti-Semitism is linked to the far-right. This surge in violent Jew-hatred is directly linked to efforts to demonize Israel.

This outbreak is in part the result of certain members of Congress, the media and other outposts of popular culture who falsely characterized Israel as the aggressor unfairly targeting innocents in the Gaza Strip, even though it was the enclave's ruling Hamas that started the conflict, which ended after the terrorist organization fired 4,000-plus missiles into the Jewish state.

Just as important, the delegitimization of Israeli self-defense and even its right to exist by advocates of critical race theory and intersectionality — toxic ideas that have been brought into the mainstream by the rise of the Black Lives Matter movement since George Floyd was murdered by a Minneapolis police officer one year ago — have made hatred for Israel fashionable in left-wing circles in ways that would have been unimaginable only a few years ago.

Those who don't think Jewish lives are expendable are condemning this violence and anyone who inspired it without reservation. But Goldberg thinks she can get away with trying to disassociate individuals who foment this hatred and contempt for Jewish rights from the distasteful spectacle of Jews being attacked in the streets.

In a gobsmackingly tone-deaf column that was published in print with one of the most egregious Times headlines in recent memory — "Attacks on Jews Are a Gift to the Right" — Goldberg did write that she didn't approve of Jews being attacked in the streets. Her main complaint, though, was that those who victimized Jews in the name of "free Palestine" were giving a bad name to the anti-Zionist cause of which she is one of the most prominent Jewish advocates.

Goldberg, who has a large following on Twitter under her @Michelleinbklyn handle, has used her prominent perch on the Times' opinion pages to promote the idea that denying the right of Jews to a state in their ancient homeland is the sort of idea that fashionable Brooklyn "progressives," including Jews, should embrace.

But an insensitive headline isn't the issue. The problem is that if you think a Jewish state is illegitimate no matter where its borders are drawn, it's not unreasonable to see some connection between that idea and those who want to act on it, whether that means Hamas and Palestinian Islamic Jihad terrorists firing rockets at Israeli homes or thugs who victimize Jews on the streets of New York in the name of #FreePalestine.

Goldberg disingenuously claims that it's unfair to blame Rep. Ilhan Omar (D-Minn.) for violence against Jews just because she and other members of the leftist congressional "Squad" engage in false claims that treat Israeli self-defense against terror as "oppression" and "war crimes." They believe that Israel is an "apartheid state" and thus ought to be eliminated and replaced with an entity where Jews are no longer sovereign or their rights ensured — something that history teaches us is a sure-fire formula for slaughter.

Goldberg denounced Newsweek's Batya Ungar-Sargon, herself a liberal, for correctly pointing out that those who blamed Trump for attacks on Asian Americans because he referred to the coronavirus pandemic's origins in China, but "can't see how congresswomen accusing Israel of terrorism might result in Jews being attacked by pro-Palestinian mobs … either can't think or … have a problem with Jews."

The columnist says that's like saying that those who are concerned about hate against Asians should not condemn China's persecution of the Uyghurs. As far as she is concerned, Israel is guilty of systematic oppression and war crimes, and deserves to be excoriated in Congress and elsewhere. She just doesn't want enthusiasm for such lies about the Jewish state to spill over into violence here, or at least not in upscale neighborhoods where progressive Jews dwell.

Unlike the Palestinians and Israel, the Uyghurs aren't trying to wipe the People's Republic of China off the map. They just want to be left in peace to practice their Muslim faith without being herded into the laogai — the Chinese Communist Party's gulags. By contrast, Palestinians have rejected repeated offers of sharing the land and continue to work, albeit futilely, to erase the last 100 years of history and send the Jews packing from their homeland.

If there is violence against Jews either here or in Europe, Goldberg prefers to blame it on supporters of Israel who, not unnaturally, consider it their duty to speak up for the embattled Jewish state. She thinks they share common ground with anti-Semites because they "conflate the Jewish people with the Israeli state." But while Jews elsewhere shouldn't be blamed for what Israelis do, her linking of those who rightly understand that Israel is integral to Jewish identity and peoplehood to hatemongers is itself a crude calumny. Progressives like herself, who want to eliminate Israel, actually have far more in common with anti-Semites who share that objective.

Criticism of Israel isn't the issue. Israel isn't perfect, but people like Omar and other supporters of the anti-Semitic BDS movement don't attack Israel for what it does, but for what it is. More to the point, if you think the only country in the world that needs to be eliminated is the sole Jewish state on the planet, then clearly you do have a problem with Jews.

fomented by their incitement because they like to think of anti-Zionism as the sort of thing that high-minded liberals support in the same way that they embrace the Black Lives Matter movement and other progressive causes. She thinks the focus on it is being used to "silence" criticism of Israel and allow the Jewish state to go on committing crimes with impunity.

Nevertheless, her effort to depict supporters of Israel as a cabal seeking to shut down honest critics is itself straight out of the traditional anti-Semitic playbook. Wherever efforts to promote the BDS movement rise up, anti-Semitic intimidation and violence follow. Attacks on Jews are a feature of the anti-Israel movement, not a bug.

It's long past time for those who smear Israel to understand that they can no longer pretend that their efforts have nothing to do with endangering Jewish lives — not only in the Jewish state but everywhere. Some on the left have started to realize this.


For example, actor Mark Ruffalo, until now a vicious Israel-hater, confessed on Twitter that he was chastened by the violence against Jews and apologized for his egregious rhetoric about a Palestinian "genocide." He may not have taken back everything he's said, but that tweet showed progress. For doing so, he was deluged with hate and accusations that he had been intimidated by the Jews.

Ideologues like Goldberg aren't ready to hold themselves accountable in that fashion. She wants to pretend that you can engage in libels against the Jewish state without having to account for what that advocacy inspires among those who think that beating up Jews is just another way to express the same thoughts that she dresses up in finer rhetoric in the pages of one of the most influential newspapers in America.

The problem isn't that some thugs are discrediting Omar or making it hard for Goldberg to justify her dishonest attacks on Israel. It's that the dots that connect their beliefs to anti-Jewish violence aren't theoretical. They are all too real.