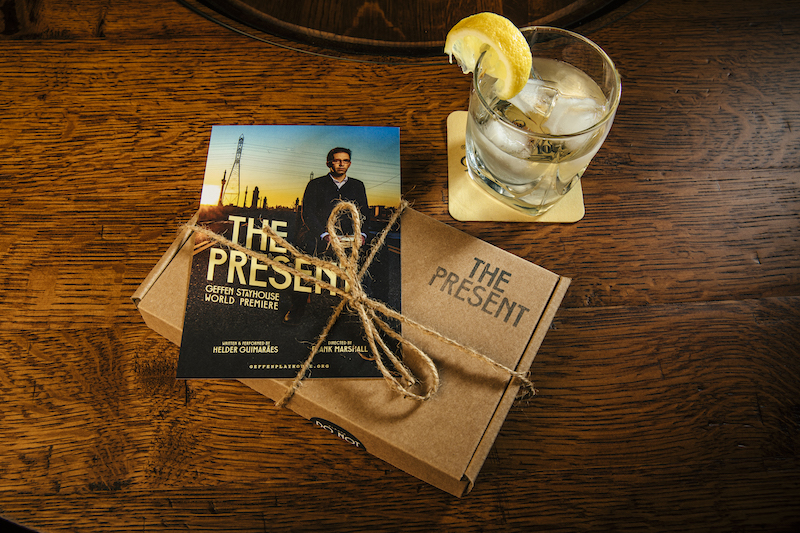 Even if joy is in short supply these days, there's no time like "The Present."

The live Zoom magic show runs just an hour and 10 minutes, but its capacity for bottling wonder feels infinite. I have no idea how Helder GuimarĂŁes, the Portuguese-born sleight-of-hand virtuoso who conceived this sensational digital production for L.A.'s Geffen Playhouse, does what he does. And I hope never to know.

Because I'm committed now to the belief that GuimarĂŁes is an extraterrestrial landed among us to share his superpower to boggle the human mind. And because in an era of rampant transparency, a bit of theatrical mystery restores one's faith in the essential art of exuberant deception.

I vow not to give you the teeniest hint about the prestidigitative content of "The Present," which originates from a room in Guimaraes's Southern California apartment (his fiancee, Catarina Marques, operates the camera). Nor will I divulge the contents of the brown box that ticket holders receive in the mail before their scheduled performance - and are instructed not to open until showtime. (The already extended production, which began May 7, is sold out through Aug. 16, but you can sign up on the Geffen website to be notified of new dates.)

The box is absolutely key to the interactive core of "The Present." That it sits so opaquely on your desk for days adds temptation to the list of itchy urges the show scratches.

You're advised to sign in about 15 minutes before the appointed virtual curtain time; since it's a West Coast production, the evening performances don't start until 11 p.m. Eastern time. Tickets are limited to 25 per show - enough tiles to fill a screen on gallery-view Zoom - but you can assemble as many people around your computer as you like.

Guimaraes, a bookish-looking fellow in his late 30s, convenes "The Present" from behind a table, surrounded by a few photos and other artifacts from magician culture - he's avid about the history of magic performance. His charmingly accented English seasons his stage persona with a soupcon of exoticism: He sounds a little like Mandy Patinkin's florid Inigo Montoya in "The Princess Bride."

Before long, we're launched into a story. (The most beguiling magicians draw you in with their hands but hook you with their brains.) GuimarĂŁes's tale weaves in autobiographical detail that includes the recuperative period after a childhood accident that he likens to a personal quarantine. An enigmatic grandfather who roped him into games factors in the story, too. All the while, the tricks Guimaraes executes grow ever more delightfully confounding, even as the portrait of his relationship to his grandfather becomes rewardingly clearer.

I watched by myself, but I wasn't alone. Or anyway, I didn't feel alone.

For one of the few interludes in this weird, numbing isolation, I was lured out of my solipsistic concerns and into someone else's imaginative chamber. And what an oasis surprise can be. The more complicated the trick and incredible the outcome, the giddier I got. Experiencing outstanding magic isn't about being fooled - it's about grateful surrender. And the enchantment of a magician's goody box in your mailbox.

Guimaraes and his astute collaborator, director Frank Marshall, sometimes electronically render the audience inaudible, unmuting someone when the magician randomly picks their assigned number from a bowl, so they can help with a trick. But the bedazzlement engendered by a magic show needs a verbal outlet, and a performer deserves the feedback of a collective gasp.

Which is why it's gratifying that the deft person at the Zoom controls opens the switches up for hoots and laughter and applause. All of which GuimarĂŁes richly, mind-blowingly earns.