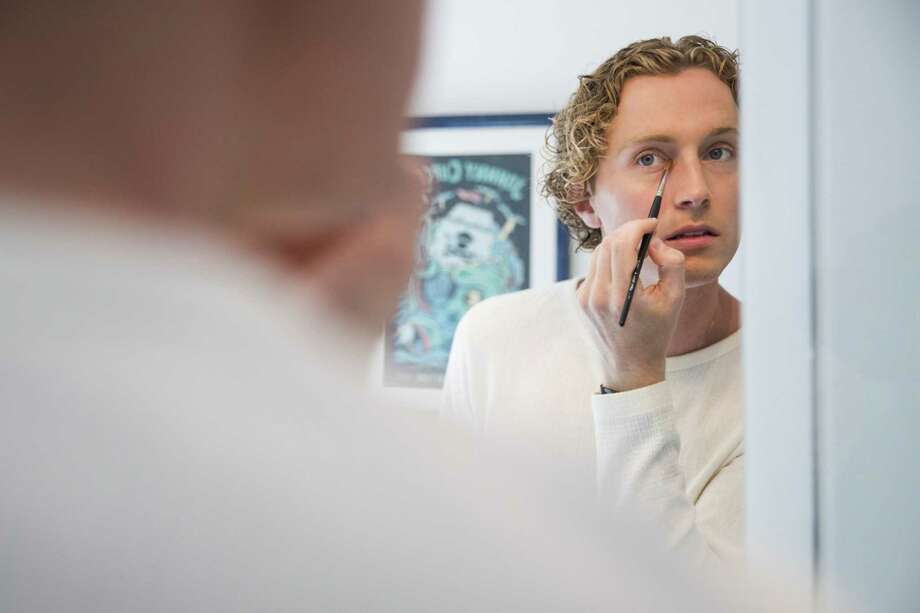 A recent poll showed about one third of men under 45 are willing to try cosmetics. Bloomberg photo by Adam Glanzman

CVS, the country's largest drugstore chain, is making the biggest bet on the category in the U.S. yet, by adding a cosmetics line from Stryx, a brand launched last year, to 2,000 stores (about a quarter of its total). The retailer is giving more legitimacy to a small, but growing, group of products that had mainly been sold through high-end stores.

With this move, CVS likely has potential customers such as Max Belovol in mind. The 23-year-old grew up wearing dazzling eyeshadows and foundation for figure-skating competitions, but didn't become truly comfortable with wearing makeup during work until the coronavirus lockdown.

"It's a Zoom effect," said Belovol, a law student based in Atlanta, who prefers concealer and its subtle look. "People don't have to worry about how they look at work. You can paint your nails, and nobody on the Zoom call is going to know."

Belovol is part of a growing shift-about one third of U.S. men under 45 said they would consider trying makeup, according to a survey by Morning Consult in September. Chalk it up to quarantine boldness, like Belovol, and the continued evolution of traditional masculinity that has already created a $9.3 billion U.S. men's grooming and skincare market.

"It's simple for cosmetics-men are a growth industry," said Ben Parr, co-founder of marketing firm Octane AI, who points to the millennial generation's embrace of men wearing makeup as a major catalyst. "You're seeing that impact starting now."

Getting into a nationwide chain marks a quick ascent for Stryx. Just three years ago, 25-year-old Devir Kahan woke up on his wedding day with a pimple and couldn't find a quick fix. The episode convinced him that he'd discovered an underserved market-guys looking for a product to make their skin look better, especially during a breakout.

Kahan co-founded Stryx in 2017 and has raised about $1 million from investors, including venture firm XRC Labs. Now its concealer tool ($19.99) and tinted moisturizer ($24.99) will be in CVS locations alongside shaving cream and razors. It's the "ultimate validation," said Kahan, also chief executive officer of Stryx, and will help normalize a stigmatized practice that's flown under the radar for years.

"It's not about a full face of makeup or color," Kahan said. "We're talking about improving blemishes, fixing up under-eye bags, a zit-all these sorts of things."

For decades, men's grooming in the U.S. equated to having a tight shave free of cuts and razor bumps, a practice that revolved around just two products: shaving cream and after-shave from giant brands, like Gillette and Old Spice. That Mad Men-era mentality began fading at the turn of the century when more men embraced fashion and skincare. The term metrosexual went mainstream.

"We didn't just take a women's product and slap a 'For Men' label on it."

In response, brands introduced a broader array of products, spanning wrinkle creams, moisturizers and hair serum. The market has grown about 13% over the past five years. However, revenue is projected to decline by 1% in 2020 due to softer razor sales as beards remain popular, according to Euromonitor International.

In the U.S., where male ruggedness is part of the country's DNA, online search data shows a surging interest around men's cosmetics. Queries for "male makeup looks" jumping almost 80% in April compared to about about a year ago, according to data from market analytics firm Moz. Other top requests include "covering redness," "hiding acne" and "hiding bags under eyes." America appears to be catching up to other countries, like Japan, where there are fewer taboos around men wearing makeup.

Makeup is a "natural extension" of men enhancing their beauty regimens over the past two decades, according to Parr, the marketing executive. It's also bound to gain popularity, as society continues moving away from gender norms, he said.

"Men's grooming has seen incredible growth during this stay-at-home period," CVS said in a statement. Adding Stryx is part of a strategy to go after that market by bringing in more emerging brands that focus on guys. "Men are a top customer focus at CVS Beauty."

Even though Stryx is pitching a product traditionally made for women, its presentation is stereotypical male. The packaging is black, grey and dark blue. The concealer tool is pitched as sleek and discreet and could be easily be mistaken for a black pen, clip included. A photo on Stryx's website rests the makeup on a wooden desk, next to a leather-bound notebook and rocks glass half-filled with booze. A slogan reads: "Handsome made easy."

"We didn't just take a women's product and slap a 'For Men' label on it," Stryx says on its website. "Our products are meticulously formulated for male skin."

Formen, a men's cosmetics company founded in 2010, uses an antlered deer head-like you'd find stuffed on a wall-as its logo. A fluid foundation comes in a black vile shaped like a skull. The brand, found mostly in Canada, also promises discreteness, and touts the sturdiness of its concealer's heavy weight aluminum container.

Axel Getz, a 24-year-old environmental consultant, became a makeup convert last year after a beauty-store clerk convinced him to try a tinted moisturizer from a women's line. His skin turned "angelic," the New York resident said, and a day later friends complimented his appearance without a single mention of the makeup.

"A lot of guys just never give themselves the chance, and that goes for men of all sexualities," said Getz, who had that same hesitancy until he tried that tinted moisturizer.