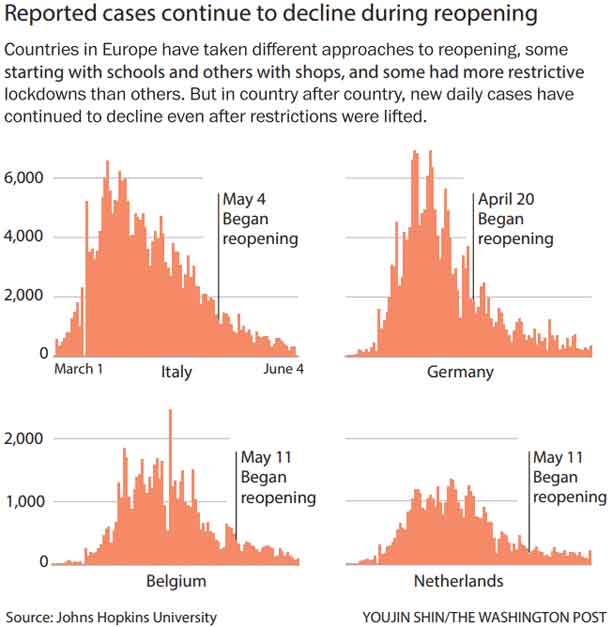 ROME - When Italy ended its lockdown one month ago, Angelo Pan, an infectious-disease doctor, was worried. His hospital, at the epicenter of the country's outbreak, braced for the possibility that progress against the coronavirus might slow or reverse - and that beds might again become crowded with people struggling to breath.

But that is not what has happened.

In Italy and across most of Europe, countries have restarted their economies and resumed a degree of socializing without visible signs of the dire health consequences forecast by many. Pan's northern Italian hospital, rather than seeing an uptick, has been able to restore once-paused services and dismantle the intensive care beds added during the emergency.

As of Friday, it hadn't admitted a coronavirus intensive care patient in 12 days.

"It's amazing that [the virus] has not started back," said Pan, who leads the infectious-disease unit at the public hospital in Cremona.

Virologists from Milan to Berlin have become much more optimistic about Europe's ability to manage the pandemic and say that, at least through the summer, the continent might have nothing more than localized and, they hope, containable hot spots.

Europe's experience, at least so far, suggests that sending children back to school, reopening restaurants and even making way for large outdoor protests does not lead to an inevitable resurgence of the virus.

But scientists also readily admit there's much they don't know about the idiosyncrasies of this virus. They are still trying to make sense of why it is behaving as it has in Europe and whether those trends will hold - and what the answers might mean for the rest of the world.

Many disease experts say enduring behavioral changes, from hand-washing to mask-wearing, could by themselves be substantially limiting the spread in Europe. They say the continued ban of large-scale events is probably capping the damage wrought by highly contagious people - the "super-spreaders" who account for much of the transmission.

They also say there's growing evidence that the virus could be proving seasonal - ebbing based on the temperature or other climactic conditions. Though warmer weather doesn't stop the virus, it can aid in the fight.

Europeans, heeding warnings that the virus is more transmissible indoors, have adapted their lives accordingly - something easier to do in warmer months. In Rome, the parks and alfresco restaurant tables are full; the tables indoors are empty.

In Germany, confined indoor gatherings have led to small outbreaks, while outdoor mass demonstrations against the lockdown in several cities - some drawing thousands of people - have not led to obvious consequences.

"There might be [open-air] transmissions occurring but they are rare," said Dirk Brockmann, a professor at Humboldt University in Berlin who models infectious diseases for Germany's Robert Koch Institute, the federal agency tasked with disease control.

"When you are in a club and there are hundreds of people dancing and breathing and yelling in a confined space - that's a whole different ballgame," Brockmann said.

One contested theory, aired by two Italian doctors this past week, is that the virus has weakened or become less aggressive. Many health officials have pushed back forcefully against that claim, saying there is no peer-reviewed evidence of such changes, and that cases every day are still proving deadly.

Massimo Ciccozzi, head of the molecular epidemiology unit at the Rome-based University Campus Bio-Medico, said his lab would be studying ways the virus may have mutated. But he said there were other reasons serious pneumonias might be developing less frequently - among them, the wider use of new therapies. Other experts have raised the possibility that a younger cohort of people is now being infected.

There is accumulating evidence that the "viral load" is linked to the severity of the infection, and that outdoor summer transmissions could make for a milder disease.

"It's like a huge, huge puzzle," Ciccozzi said. "Every day you find a piece."

All the while, in country after European country, reported daily case numbers have not just leveled off, like in parts of the United States, but continued to plummet.

In Italy, the number of coronavirus patients in ICUs has declined from 4,000, at the peak in early April, to 400; it ticked down every single day of May. In Germany, many contact tracing teams sit idle, without enough new infections to trace. In Belgium, which had been one of the worst-hit countries, hospitals are clearing out, and doctors don't report any unusual spikes in patients reporting flu-like symptoms.

"I was also expecting a scenario where the numbers would have stabilized, maybe a small rise," said Steven Van Gucht, a virologist who is the head of the scientific committee that has been advising Belgian health authorities on their pandemic response. "It would have been natural. But we don't see that for the moment."

Experts warn there is still the danger of a second wave, as happened a century ago, when wintertime brought an even deadlier return of the 1918 flu pandemic.

Even now, Europe has not fully reopened; international flights and tourism have been mostly on hold, and some countries have not restarted schools. There is still a debate raging about what sort of openings, from kindergartens to theaters, might push things too far.

Once people start moving around in society again, potentially exposing themselves to the virus, it can take a week or two before symptoms show up - and a week more before somebody might need to go to the hospital. Policymakers are getting an initial picture of how Europe is responding to the reopening efforts, but it is far from complete. And there are some worrying signs beyond the continent: Countries in the Middle East are seeing a surge of new cases following a loosening of restrictions.

"Let's take some more weeks before we claim victory," said Ilaria Capua, an Italian virologist at the University of Florida.

Ranieri Guerra, a World Health Organization assistant director-general who is advising the Italian Health Ministry, said the risk could rise if Europe goes through the summer without a major spike and people drop their guard and revert to their pre-virus behavior.

"We have achieved a lot, with massive sacrifices," Guerra said. "But the virus is still circulating."

France is one of the only European countries that has seen a notable uptick in daily cases since it began to loosen restrictions. It is not clear what caused the increases. Jean-FranĂ§ois Delfraissy, the head of France's National Scientific Council, said Friday that the overall trend was nonetheless a significant decline in case numbers. "The virus continues to spread, in particular in certain regions[. . .] but it's spreading with a decreases speed," he said, speaking to France Inter radio. "Where we had tens of thousands of cases, about 80,000 new cases per day in March before the confinement, we estimate that we're now around about 1,000."

Some other countries have seen small but manageable clusters of infections over the past month. One, in the lightly populated Italian region of Molise, was reportedly linked to a funeral. Spain has seen several clusters attributed to parties. In Germany, there have been several outbreaks connected to meat packing plants and to indoor gatherings.

The latest such outbreak, a cluster of 36 infections in the Lower Saxony city of GĂ¶ttingen, was said to have stemmed from private family parties during Eid holiday festivities and a hookah bar that was open in breach of health guidelines. More than 300 people have been quarantined.

Another cluster of 44 infections emerged days after a May 24 church service in Bremerhaven, while a larger outbreak of 200 cases hit a church congregation in Frankfurt. The church later apologized for allowing singing and not requiring face masks.

"This infection chain shows us again how quickly an infection can spread if many people come together in a small space," said Frankfurt's health department head, Stefan Majer. "I appeal to everyone's personal responsibility to take this virus seriously and to continue to adhere to the distance rules and hygiene measures."

But these clusters have not been enough to disrupt the overall downward trend. In the latest week, 93 German districts - about a quarter - reported no new infections. As numbers remain subdued, some of the country's top virologists predict that Germany, which is among the most advanced European countries in contact tracing, may be able to avoid a second wave altogether.

"There was this warning about the second wave, but we said this is not going to happen for several reasons," said Hendrik Streeck, a virologist at Bonn University. "We still have social distancing and hygiene measures in place, and when we see larger outbreaks, hotspots, we immediately get in and control the virus."

Most European countries implemented lockdowns in March, essentially bringing economic activity to a halt. Those measures, within several weeks, appeared to cut down on transmission of the virus in areas where it had been spreading - and acted as a public alarm bell.

But public health officials, seeing no resurgence since the easing of lockdowns, have begun to wonder whether some restrictions could have been avoided.

The fact that we haven't seen major spikes so far tells us that confinement was only a part of the strategy to reduce the spread of this virus, and perhaps not the most important part," said Camilla Stoltenberg, the director general of the Norwegian Institute of Public Health, who has helped lead her country's pandemic response.

Stoltenberg pointed to school closures as one area that deserves reconsideration. She said she advised against closing Norway's schools in March but was overruled.

"We should all have second thoughts about whether it was really necessary. We see now that after having opened schools, we haven't had any outbreak," she said.

In Italy, there has been little second-guessing of a lockdown that was among the most rigid in the Western world. Health officials say it gave overwhelmed hospitals the swiftest chance to stabilize. For doctors who attended to the emergency, the hope is that the worst is over.

"We have come out of a nightmare," said Vanni Borghi, a doctor in the northern city of Modena.

There might yet be a return wave, Borghi said, but if that happens, hospitals will be more prepared.

"We have time to organize ourselves," he said.