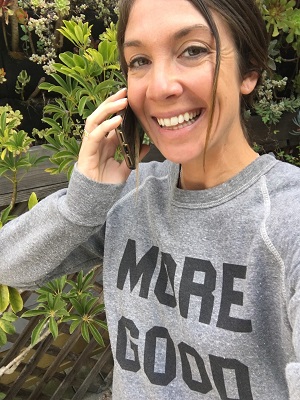 Her mind would routinely go back to something her mom, Patricia Latham, had told her after the 2012 Sandy Hook mass school shooting in Newtown, Connecticut.

"I'd been feeling terribly sad about it, and she said, 'Mary, there are always going to be tragedies in the world, but there will always be more good - you just have to look for it,'" Latham, 32, recalled.

It took almost three years for Latham to truly understand what her mother meant. And to honor her mom's legacy of looking for goodness, she came up with a plan: She would pack a suitcase with several changes of clothes and hit the road in her mom's blue Subaru Outback to visit all 50 states in search of simple acts of kindness.

Latham decided to call her road trip project "More Good" and document all of her stops on a website, with the goal of publishing a book to donate to hospital waiting rooms coast-to-coast.

On Oct. 29, 2016, she set out in "Old Blue" from her family's home on Long Island, taking along dozens of "More Good" T-shirts to hand out to people who followed her journey online and agreed to host her for two or three nights.

She also packed the back of the car with a camera and several notebooks, plenty of water and snacks, and a blanket, candles and flashlight, joking that she wanted to be prepared for a blizzard in Maine.

Almost three years later, other than occasional weekend flights home to Long Island to photograph weddings and replenish her funds and her energy, Latham is still at it, with only seven more states to go on her road trip, including Alaska and Hawaii.

For those states, she's hoping to rent a blue Subaru rather than ship her car to Hawaii or spend weeks alone in the Alaskan outback.

"My mom would be impressed - I've already put more than 38,000 miles on the odometer," said Latham, who has thus far stayed with about 140 different families, mainly in small towns along America's back roads. People who follow her journey on her website invite her to stay in their guest rooms and refer her to people to interview in their communities who brighten others' lives.

"I spend a lot of time alone in my car and it can get lonely," said Latham. "So to stay with people and have a home-cooked meal and hear their stories of kindness provides a big boost. I haven't had a single bad experience with any of them."

From her first stop in Niantic, Connecticut, to her latest stay in the Cincinnati area, Latham has collected hundreds of "do good" stories along the way.

In Rhode Island, a bank teller told her about the time she'd had a bad day at work and a customer asked if she was okay, said Latham. When the teller said she'd be fine if she ate some M & Ms after work, the customer bought a bag of the candies and returned to slip them under the teller's bank window.

In Indiana, she met a woman who was molested as a child and now takes in dozens of foster children with special needs. "She hopes to provide them with the happiness she never experienced," said Latham.

Among her most memorable experiences, she said, was a stay in Cape Elizabeth, Maine (minus a blizzard), at a 100-year-old farmhouse.

"This woman reached out to me on Facebook and when I looked at her photo I thought, 'This could be the nicest woman in the world or a serial killer,'" Latham recalled with a laugh. "The photo showed her riding her bike with a puppy in the basket."

Latham was delighted (and relieved) when she arrived to smell the aroma of freshly-baked blueberry muffins drifting through the front screen door.

"I pushed the door open and was instantly smacked with this warmth," she said. "There was a wood stove burning and the puppy from that basket ran out to greet me. And then the woman hosting me gave me a big hug. Although we were strangers, we sat and talked like old friends."

She had similar experiences with a family in Indiana who fixed her flat tire and then put her up for three nights, and a man who recently had a double-lung transplant who left a $20 bill in her backpack.

Some of her hosts are now her friends, like Walter and Ava Butzu, teachers from Ann Arbor, Michigan. Earlier this month, they introduced her to three different people she interviewed for her book: a French Holocaust survivor, a college graduate who worked his way from poverty to medical school and a former University of Michigan band director who spoke eloquently about his decades of teaching. She now has hundreds of hours of interviews to transcribe for her book.

"We were thrilled to open up our home to Mary and connect over meals, walks and yoga," Ava Butzu, 49, said. "When she left, my husband, who can be a bit jaded at times, said, 'I miss Mary,' and talked about how Mary sees the world as a place of hope and optimism."

Latham's long journey has at times been hard on her emotionally, added Butzu, who spent an evening talking to her about the challenges she's faced on the road.

"She's staying with people she's never met, offering herself up to hear people tell their stories of loss, tragedy and hardships," said Butzu. "She knows it's taking a toll on her body, but she remains dogged that she will complete her goal."

Latham also made a lasting impression on Kim and Chris Rothe and their twin 11-year-old boys in Mansfield, Massachusetts. They offered up their guest room to her in 2016 over the Christmas holidays.

"Reading Mary's story (online) brought me to tears," said Kim Rothe, a 46-year-old special education teacher, whose father died of cancer. "Mary and I both knew how cruel cancer can be, and yet Mary was looking for the positive. What better way to honor her Mom than to share what she finds with everyone?"

When Latham pulled up to the Rothes' home in "Old Blue" two days before Christmas, she was exhausted with a bad cold and shortly after she said hello she went promptly to bed and slept for 22 hours, recalled Rothe.

"I was so touched that she felt comfortable enough in our home to collapse and just sleep," Rothe said. On Christmas morning, Latham played basketball with the boys, said Rothe, and delighted in watching them open their presents.

"We also exchanged gifts, and we both cried when she left," she added. "How brave of her to travel the country and rely on the kindness of strangers. It's exactly what this country needs in a time that seems so divisive."

Latham said she never discusses politics with the people she stays with or interviews. She's found that it simply doesn't matter.

"I've been in Trump homes, Hillary homes, Bernie homes, atheist homes, Christian homes and Jewish homes," she said. "One guest room I stayed in had 52 crosses hanging on the wall. For me, there is really only one underlying common factor: They're good people who want to be a part of something good."

After a long day on the highway when she feels like pulling over and crying, Latham said she thinks about her mother and what her journey would mean to her.

"My mom went up (to heaven) probably thinking that she'd put her feet up, drink some chardonnay and play Scrabble, and now I've got her on full-time angel duty," she said. "But I know she'd be so happy that I'm doing this. That makes every single mile worth it."