Copyright bots and classical musicians are fighting online, and the bots are winning 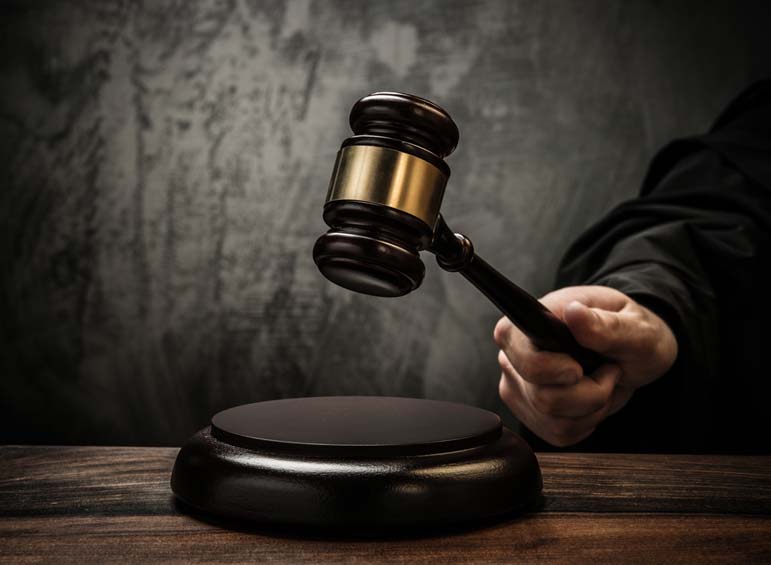 A few Sundays ago, Camerata Pacifica artistic director Adrian Spence, aided by his tech-savvy son Keiran, went live on Facebook to broadcast a previously recorded performance of Mozart's Trio in E flat (K. 498), aka the "Kegelstatt" trio. At least they tried to.

The recorded performance was one of many that Spence had drawn from the Camerata's extensive video archives. When the covid-19 crisis abruptly canceled its season, Spence launched a weekly series of rebroadcasts to fill the silence. These broadcasts, even with their modest virtual attendance of 100 or so viewers per stream, have been essential to keeping Spence's Santa Barbara, California-based chamber organization engaged with its audience.

That is, until that recent Sunday, when his audience started to disappear, one by one, all the way down to none.

"What the hell is going on?" Spence recalls shouting to his son across the living room as the viewer count conspicuously dropped. Just minutes into the airing of the concert, Facebook issued Spence a notification that his video - an original performance of an hour-long piece composed by Mozart in 1786 - somehow contained one minute and 18 seconds of someone else's work, in this case, "audio owned by Naxos of America."

Spence, and presumably Mozart, would beg to differ.

"They're blocking my use of my own content," Spence said later in a phone interview, "which feels dystopian."

As covid-19 forces more and more classical musicians and organizations to shift operations to the internet, they're having to contend with an entirely different but equally faceless adversary: copyright bots. Or, more accurately, content identification algorithms dispatched across social media to scan content and detect illegal use of copyrighted recordings. You've encountered these bots in the wild if you've ever had a workout video or living room lip-sync blocked or muted for ambient inclusion or flagrant use of Britney or Bruce. But who owns Brahms?

These oft-overzealous algorithms are particularly fine-tuned for the job of sniffing out the sonic idiosyncrasies of pop music, having been trained on massive troves of "reference" audio files submitted by record companies and performing rights societies. But classical musicians are discovering en masse that the perceptivity of automated copyright systems falls critically short when it comes to classical music, which presents unique challenges both in terms of content and context. After all, classical music exists as a vast, endlessly revisited and repeated repertoire of public-domain works distinguishable only through nuanced variations in performance. Put simply, bots aren't great listeners.

After the removal of his clips, Spence's only recourse was to file a dispute with Facebook by filling out a single-field form. This was followed by six hours of fruitless chats with various Facebook representatives. It took nearly four days to clear the spurious claim, and in the interim, Facebook suspended Camerata's access to live-streaming.

Clearing copyright claims has since become part of Spence's new routine, casting emails into an opaque dispute system he describes as "the DMV on steroids."

And the hits keep coming: YouTube blocked a recent live stream of a recorded Camerata performance of Carl Nielsen's Wind Quintet, Op. 43, after it attracted a swarm of five automated copyright claims from different record companies. It's gotten to the point where Camerata videos are prefaced by a warning screen, explaining their anticipated disappearance in advance.

"I have no protection for my own produced material," Spence says. "If you want to put a copyright claim against me, I'm happy to take the time to write back to you and say, 'This is an erroneous claim and here's why.' But when you're immediately blocking videos or streams, that's negatively impacting our very mission in a time where this now has become mission critical."

These systems aren't just disrupting the relationships between classical organizations and their audiences; they're also affecting individual musicians trying to stay musically present - and financially afloat - during the crisis.

Michael Sheppard, a Baltimore-based pianist, composer and teacher, was recently giving a Facebook Live performance of a Beethoven sonata (No. 3, Op. 2, in C) when Facebook blocked the stream, citing the detection of "2:28 of music owned by Naxos of America" - specifically a passage recorded by the French pianist Jean-Efflam Bavouzet, whom Sheppard is not.

The takedown led Sheppard into what he describes as "a byzantine web of ridiculousness" starting with Facebook's dispute form: "Beethoven died in 1827," he responded. "This music is very much in the public domain. Please unblock it."

And this wasn't Sheppard's first run-in with Facebook, which has blocked or muted past performances of FaurĂ©, Chopin and Bach for being too digitally reminiscent of other performances of Faure, Chopin and Bach. Frustrated with the intrusive claim of infringement, the imposed busywork of defending himself, and the helplessness he felt trying to get these issues recognized and resolved, Sheppard took to Twitter.

"Dear @naxosrecords," he tweeted May 9, "PLEASE stop muting portions of works whose composers have been dead for hundreds of years. It does 0% of people any good, especially musicians like myself who are trying to make a living in time of crisis. #UnmuteBeethoven."

Two days later, Naxos tweeted back, thanking Sheppard for his request and confirming that his video had been "whitelisted."

"There are people worse off than me whose only income is their performances," says Sheppard, who accompanies his streams with a "virtual tip jar." "But if it's muted, what's the point? Other people are doing the same thing and getting stymied by this."

The covid-19 crisis has certainly driven more classical musicians online to experiment with streaming, but the struggle between bots and Bach isn't new. The pianist James Rhodes went viral after Sony claimed ownership of the living room performance of Bach's First Partita that he posted to Facebook in 2018. The same year, musician and blogger Sebastian Tomczak received multiple copyright claims against a 10-hour stretch of white noise he uploaded to YouTube three years prior.

And in January 2019, students of conductor Jonathan Girard at the University of British Columbia presented a live-streamed program of orchestral works by Beethoven and Tchaikovsky that Facebook cut off and blocked midstream.

"This is a real, viable way of reaching audiences and communicating art to the world," Girard says. "And it's going to be blocked by copyright algorithms that don't actually fairly look at what's happening. That's a serious problem for musicians that are playing music that's in the public domain."

It might be tempting to glance at the copyright claims and simply blame the names listed at the bottom - the seemingly aggressive record companies issuing them all. But many of those companies are as helpless against the system as the targets of their claims.

Take Naxos, the classical mother ship that represents about 2.5 million tracks and, according to senior manager of video and new media Duncan Hammons, considers copyright protection "among our chief duties per our relationship with our distributed label clients."

"We're at the mercy of automation in order to uphold our obligations to our clients," Hammons says in an email. Like other record companies, Naxos relies on Facebook's and YouTube's content identification systems to track potential illegal use.

"Though the technology works most of the time in terms of correctly identifying instances of our clients' content on-platform, it still generates a not-insignificant amount of mismatches that require human review to differentiate," Hammons says. "The chances of conflicts with this amount of content are considerable. For these reasons there is always a volume of potentially erroneous auto-generated claims that unless contested, I may never be made explicitly aware."

Hammons says that most claims contested by Facebook and YouTube users are cleared within a week of dispute, and that arrangements can be made for channel owners who are able to prove "the legitimacy of their status as a performing arts entity, (or) that their channel constitutes a low risk for abuse of the privilege."

"We would love to work with these platforms to improve their technologies so that they are better adapted for classical music," Hammons says, "but as the situation stands, our input on the issue is limited."

For its part, YouTube has invested more than $100 million to refine its proprietary Content ID technology, according to a company representative. And its apparatus for handling disputes - which, according to several musicians, is more robust than Facebook's -has managed to resolve nearly all copyright issues before they escalate to legal matters. YouTube doesn't actively mediate content disputes, but it does passively enable them.

And this week, Facebook posted updates to its music and video policies, including clarified guidelines concerning the use of music in video. It highlighted its free Sound Collection library of thousands of unrestricted tracks, and announced pending improvements to the notification system "to give people time to adjust their streams and avoid interruptions if we detect they may be approaching our limitations."

But the finer points of those limitations remain mysterious. Facebook scans uploaded content through two systems: its own platform-tailored Rights Manager, which, according to Facebook, can be used to protect only copyrighted works, and a third-party platform called Audible Magic, which helps automatically block audiovisual uploads that match content in its database. Audible Magic advertises services that allow such social media platforms as Twitch, SoundCloud and Vimeo to "identify content in real-time with unparalleled accuracy" and "operate in 'fire-and-forget' mode using a simple end to end solution."

Despite the robustness of such databases, classical performances remain sitting ducks for erroneous challenges. And in general, the "solutions" to these growing problems seem more tailored to rights holders than to, say, pianists. Lowly disputers are left to fight their own battles, whether they started them or not.

"There is no good solution right now," says Meredith Rose of the Washington, D.C.-based intellectual property advocacy group Public Knowledge. "Maybe in another couple of years they'll get the technology to the point where it can actually distinguish between two recordings of Beethoven's Fifth or whatever. But they're not there yet."

Likewise, the faith that platforms and record companies invest in these technologies may be as flawed as the systems themselves.

"We built these systems around the presumption that everybody is either: A, a pirate, or B, should be a copyright expert," Rose says.

As it stands, the relationship between classical musicians and copyright bots is a study in contradictions, as newborn technologies police music that has been with us for centuries and individual musicians battle back against the indifference of massive corporations.

But this unhealthy dynamic also presents a consequential conundrum in terms of how the arts engage with social media as they grow more and more dependent on each other.

"These (classical) organizations have been cultivating large audiences through these social media sites," notes Girard, the conductor, "and now they effectively can't access those audiences with their most prized content.

"Considering everything that's going on, it just seems like just yet another thing that'