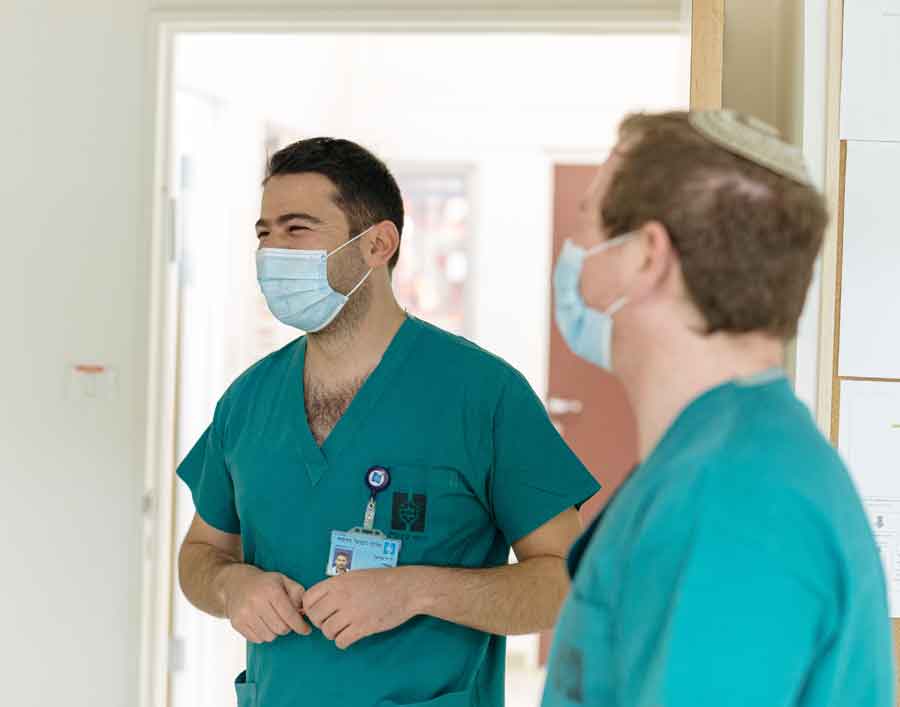 JERUSALEM --- When Jesse Michael Kramer was hospitalized with coronavirus, he realized as soon as the doctor in the spacesuit introduced himself that it would be a rare encounter.

Kramer is an Israeli ultra-Orthodox Jew; Fadi Kharouf is a Palestinian Muslim.

"Fadi, it's an Arab name," Kramer, 75, said as he recalled his time at Jerusalem's Hadassah Ein Kerem Hospital, once he was back home convalescing in the ultra-Orthodox neighborhood he seldom leaves. "He was very good to me."

Such unlikely meetings have become more commonplace after the pandemic struck with particular fury in Jerusalem's most insular and religious Jewish enclaves, just a few miles - but cultural light-years - from the Arab neighborhoods where Kharouf and other Palestinian physicians and nurses live.

The pandemic has created a bridge between their worlds. Hundreds of Jewish covid-19 patients are being treated by Arab practitioners they might never meet outside the hospital. Sick Palestinians are getting care from Jewish medical staff they might otherwise avoid.

For many health-care workers, exhausting themselves shift after shift, this shared fight against a common enemy has provided a boost of mutual esteem amid the dark days of crisis.

"I am sure we may have extremely different political views, but they are very respectful to me," said Kharouf of his Jewish patients, who are mostly from ultra-Orthodox groups, known here as Haredim.

For his part, Kharouf, 30, has learned much about Judaism's strictest sects. He has helped covid-weakened men wrap the leather straps of the ritual prayer tefillin around their arms. He has learned many of their dietary laws.

Preparing to enter one of the hospital's three covid wards on a recent afternoon, he paused while zipping up his tear-proof hazmat suit to recall a few Hebrew words of the Mourner's Kaddish prayer, which he has heard recited at many bedside deaths, sometimes by family members he has helped patch in via cellphone video.

"I am proud of my Palestinian culture," he said. "I have many things to criticize about what is happening in the outside world. But in here, we are all just humans."

Israeli hospitals were already known as one of the country's few cultural crossroads, a place where everyone from Jewish settlers to Palestinian activists comes to receive nationalized health care, and to deliver it. Israel's Arab minority, which makes up 20 percent of the population, is well represented in the ranks of those wearing scrubs and lab coats. Many speak of medicine as a good avenue into an economy they feel otherwise shuts them out.

As the epidemic has exploded, the sense of caring for the other has heightened. Advocates have seized on the adulation being showered on health-care workers to argue for greater civil rights for the Arab doctors and nurses among them.

The coronavirus outbreak is the latest emergency that medical staff have had to address across ethnic lines. At times of war and terrorism, assailants and victims often end up in the same emergency room, treated by both Jews and Arabs.

Sigal Sviri, the Jewish physician heading Hadassah's covid-19 intensive care units and one of Kharouf's medical mentors, recounted her first shift as an emergency room doctor in the early 1990s. It was full of screaming victims from a bus hijacking that had ended with a crash. Suddenly, she realized she was treating the hijacker, a young Palestinian.

"I was very young and very scared," she said. "I wasn't going to refuse but I didn't know how to react."

Then she saw the care another surgeon was taking as he stitched up the wounds on the man's face. She asked why. " 'It doesn't matter what we feel,' " she recalled the doctor saying. " 'We are not judges. We are not prison guards. We are healers.' "

Decades later, Sviri has marveled at the durability of that ethic as coronavirus swept the country.

At the beginning of the outbreak, she knew staffing was going to be tight. Not only did Israeli Arabs volunteer for the quadruple shifts, but so did several of the West Bank Palestinians who were being trained at the hospital. The risk for them, she said, was not just from the virus but from other Palestinians at home who might treat them as pariahs for helping Israelis and for potentially transmitting the infection to the West Bank.

One of those doctors, Haitham Alamlih, said he never hesitated to sign up.

"We are all fighting the same battle," he said between shifts from his family home in Hebron. "So many Jewish patients are shocked. They say, 'You are from Hebron and you are treating me nicely? Oh my G od!' "

Hospital life makes him feel "complete," Kharouf said. He has Haredi patients who call his cellphone to ask questions and check on his well-being. He was one of the Arabs who covered for the Jewish staff during Passover, just as Jews now cover the wards each evening during Ramadan while Arabs end their fast around the breakroom table.

"I do believe that if we at Hadassah were the politicians, we could have peace," said Naela Hayek, an Israeli Arab nurse, who says she now has enough command of Judaism to become a rabbi. She and Jewish colleague Julie Benbenishty have sought to share some of what they call "health-care diplomacy" through an organization called Nurses in the Middle East.

As to whether the good feelings will endure once the crisis is over, Benbenishty has her doubts. For a research paper, she once surveyed dozens of ultra-Orthodox patients to see whether their experience in the hospital had changed their view of the Arab-Jewish schism once they got out.

The answer was largely no.

"They said the hospital was a very special place where everyone got equal care," Benbenishty said. "But on the outside, that still wasn't the case."