America rescued Ilhan Omar and her family, but to hear her tell it, we are the ones who should be grateful 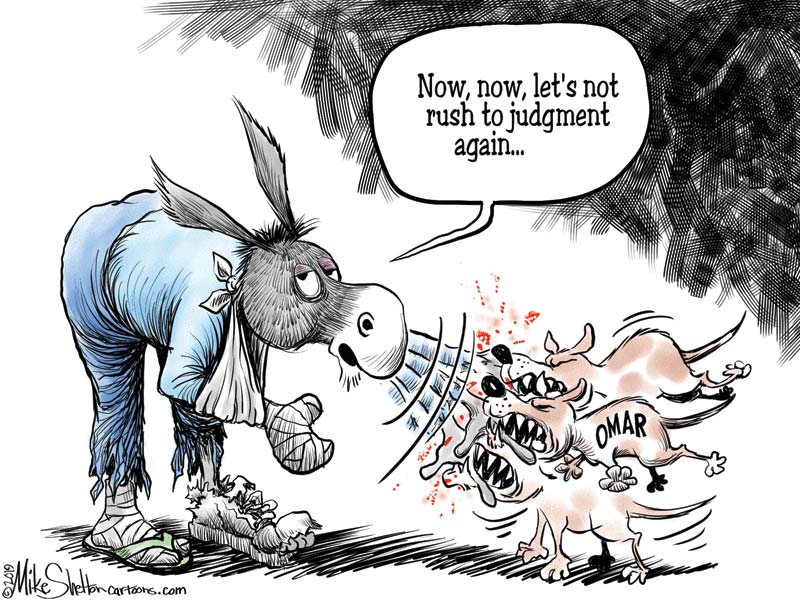 Since she entered Congress earlier this year, freshman Minnesota congresswoman Ilhan Omar has consistently made news with her anti-Semitism, which may yet force the Democratic Party into a corner. Less noticed — and apparently even less troubling to her party — is the hostility Omar shows in public statements about her adopted country. Omar was born in Somalia, which she fled with her family at age nine, during the country's civil war. She spent four years in a refugee camp in Kenya until the United States rescued her and her family in 1995. It's not surprising that she has made her remarkable experience a centerpiece of her political campaigns and public life.

What is surprising is the extent to which her narrative consists of complaints about the intolerance, racism, inequity, and filth that she found when she came to the United States, and since. Gratitude, for the country and the people who saved and welcomed her family, is largely absent from her telling. Interviewed on the popular Pod Save America podcast, Omar explained that when her family was preparing for resettlement in America, they watched orientation videos "about the life that they are to expect once they arrive here . . . happy families, and dinner tables where there is an abundance of food, images of happy young children running off to their school buses . . . images of a country where people are happy and leading a life that is prosperous. You are really looking forward to life as you see it on that screen."

Life in American was not like the images she saw in the welcome video, Omar insists. "When we landed," she recalls, "I saw panhandlers on the side of the streets, there being trash everywhere, and graffiti on the side of the walls." Omar asked her father why America fell so short of what she had been promised, and he told her to "hold on, we will get to our America." Omar has still not arrived in the America she was promised, though she has now been elected to Congress. We continue to disappoint her. "The current reality that people live in . . . an America where you can't access the justice system equally because you are born with a different race, or a different gender, or are born into a different class, that isn't the America that I heard about, that isn't the America that I watched."

Omar told a similar story to CNN's Christiane Amanpour, saying that she noticed "a disconnect between the ideals of America and the actual reality." This is a constant theme. She did not expect, she has said, to "go to school with kids who were worried about food as much as I was worried about it in a refugee camp."

America is not only as deprived as an East African refugee camp, the country is also filled with people who don't recognize how lucky they are to admit people like Ilhan Omar. Unlike our violent and unpredictable natives, including the notorious "ISIS bride," whom Omar makes a point of noting is "not an immigrant, but an American born to a family of diplomats," immigrants like her "went through years of vetting and went through the process of becoming citizens. I mean we have been fingerprinted, tested, more than any American has ever been who's born in this country." Like many on the left, Omar believes that America's purpose is to admit immigrants and make them feel welcome. To the extent that Americans "make room" for the next wave of immigrants, they fulfill the American dream; to the extent that they fail to be welcoming, they betray it.

Omar's colleague in the House of Representatives, Alexandria Ocasio-Cortez, who has arguably become the Democrats' domestic-policy leader, just as Omar now appears to be their leader on foreign policy, holds this view as well. "Those women and children," she told Rachel Maddow on MSNBC, referring to illegal aliens from Mexico and Central America, "trying to come here with nothing but the shirts on their back to create an opportunity and provide for this nation, are acting more in the American tradition" than opponents of open borders.

The American Dream once referred to the aspirations of Americans to provide better lives for their children. For the Left, that idea has come to mean the intentions of anyone, anywhere, who wants to come here. From this perspective, the people who now live in the U.S. are superfluous to America and the American idea. We are placeholders, keeping things together until tomorrow's Americans — more deserving, though apparently less appreciative — get here. Meantime, we can try to survive this hellish existence until they arrive to bail us out.


Previously:
• 01/24/19 BEATING THE DRUM: As the Covington High School brouhaha reminds us, the media have precast the meaning of every story
• 12/04/18: Charged With Discrimination: Pols moves to ban some 'cashless' establishments, arguing that they are racist
• 11/19/18: The deep ties between the depraved cult leader Jim Jones and prominent Democratic politicians
• 10/05/18: 'Globalist' Doesn't Mean 'Jew'
• 09/12/17: Mayor de Bolshevik: Will his dangerous dogma be embraced by others on America's far-left?
• 08/21/17: Shadow President?
• 08/15/17: Between Chaos and Competence: The Trump administration has been remarkably substantive, but its two competing narratives can't coexist forever
• 09/22/16: Three Blind Mayors: The elected leaders of Paris, London, and New York should know better than to downplay the frequency of radical attacks