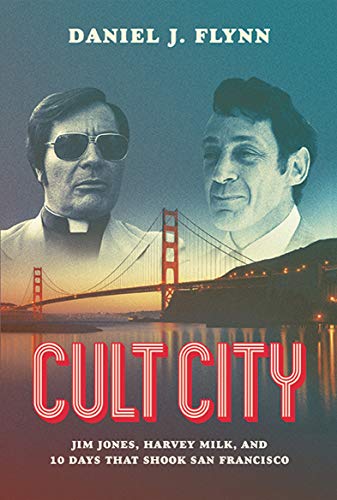 Thanksgiving, 1978 was bookended by two of the most bizarre and notorious events in American history.

On November 18 in Guyana, hundreds of members of Jim Jones's Peoples Temple committed mass suicide, or were murdered. Over the next few days, news trickled out from the jungle of 300, 400, 600, and finally more than 900 poisoned cultists, most of them from the San Francisco Bay Area, including many children; and of a congressman, Leo Ryan, ambushed and assassinated as he left with a dozen or so apostates whom he had rescued.

Then, the Monday after the Thanksgiving weekend, San Francisco mayor George Moscone and a city supervisor, Harvey Milk, the first openly gay non-incumbent politician elected to office in America, were shot and killed in City Hall by Dan White, a disgruntled city supervisor who had quit his job and then wanted it back.

The connection — sometimes tenuous, sometimes shocking — between these incidents has been brushed over by a society eager to sanctify its martyrs and forget its villains, but Daniel Flynn in Cult City: Jim Jones, Harvey Milk, and 10 Days That Shook San Francisco brings to light a kind of secret history of California in the 1970s, showing how modern progressive politics intersected with cults of madness and despair.

Jim Jones came from Depression-Era Indiana, and was drawn to charismatic Christianity and radical politics from an early age. He founded a church called People Temple, dedicated to racial harmony, the living Christ, and veneration of the Soviet Union, and presented a compelling enough message that he attracted thousands of followers over the years.

Having moved his flock to northern California in the 1960s, Jones began leveraging their labor toward political ends, volunteering them for protests or electioneering on behalf of friendly aspirants to public office. Gaining the respect of San Francisco's political class, Jones became a player in his own right. Many gave him credit for Moscone's tight victory in the 1975 mayoral runoff, and he was appointed head of the San Francisco Housing Authority. Praised as a hero of social justice and a crusader for racial equality, Jones became an important figure in Democratic politics.

Among his advocates was Harvey Milk, also a newcomer to San Francisco. Milk, formerly a Goldwater Republican, became politically radical in California and repeatedly sought election to office as an outsider to the political machine. Milk attended services at Peoples Temple dozens of times, and wrote effusive letters to Jones. "Such greatness I have found in Jim Jones's Peoples Temple," Milk proclaimed.

Milk wasn't Jones's only fan. Many powerful people — Governor Jerry Brown, columnist Herb Caen, and Vice President Walter Mondale, to name a few — sought Jones's blessings and expressed admiration for his dedication to racial equality and a better world. Flynn does a good job of laying out the social and political landscape of the Bay Area in the late seventies and situating the bizarre respect that the Jones cult received within the general fruitiness of the era. Jim Jones's Bay Area was the same milieu that gave rise to the Zodiac killer, the lost-in-time Zebra murders, and the depredations of the Symbionese Liberation Army. In that context, a wacky preacher who healed the sick and ran drug-treatment centers while promising a racially unified heaven on earth seemed like a salutary influence by comparison.

While Harvey Milk was a strong advocate for Jim Jones, he was never a member of the cult as such, and Flynn may overstate the comparison between the two figures, though he draws no moral equivalence between them. It's true that Milk amplified Peoples Temple propaganda, and even wrote letters to President Jimmy Carter defending Jones after disturbing reports of abuse emerged from the Jonestown compound in Guyana. But Milk was essentially just an aggressive municipal official willing to play hardball; he was murdered by a political rival. Jim Jones, on the other hand, was a diabolical lunatic for the ages.

Flynn nonetheless makes a compelling argument about our faulty historical memory of these events. Dan White killed Harvey Milk and George Moscone because he felt stymied and betrayed by them politically, not because Milk was gay or Moscone was friendly to gays. There is no evidence that White was homophobic, but with the help of two Oscar-winning films, Milk has been elevated to sainthood, a martyr to gay liberation.

At the same time, Jim Jones's connection to mainstream Democratic politics has been suppressed. He and the Peoples Temple, which exalted racial diversity and social justice, have been cast as harrowing examples of Christian religious extremism, though Jones preached atheism and ordered his followers to use the Bible as toilet paper. A roster of leaders who remain dominant figures in California politics today embraced Jones publically. Jerry Brown, then and now governor of the state, approvingly visited the Peoples Temple, and Senator Dianne Feinstein, who ascended to the mayoralty upon Moscone's assassination, joined the Board of Supervisors in honoring Jones. Willie Brown, longtime speaker of the California state assembly, a mayor of San Francisco, and the mentor of Senator Kamala Harris, was especially lavish in his praise of Jones, calling him "a combination of Martin Luther King, Jr., Angela Davis, Albert Einstein, and Chairman Mao."

Flynn closes with another important observation: that the one hero of the Jonestown saga, Congressman Leo Ryan, has been relegated to oblivion. Ryan flew into the Guyanese wilderness to investigate Jonestown and rescue defectors. He wound up being only the second congressman assassinated in the line of duty, and his body was mutilated. Ryan has been memorialized by a park and federal building in his former congressional district south of San Francisco, but Flynn observes that nothing in San Francisco or Oakland, where most of the Temple victims came from, commemorates his sacrifice. The history of Jonestown and the public officials complicit in Jones's rise and fall is apparently still too sensitive to be dealt with honestly. Cult City could change that.


Previously:
• 10/05/18: 'Globalist' Doesn't Mean 'Jew'
• 09/12/17: Mayor de Bolshevik: Will his dangerous dogma be embraced by others on America's far-left?
• 08/21/17: Shadow President?
• 08/15/17: Between Chaos and Competence: The Trump administration has been remarkably substantive, but its two competing narratives can't coexist forever
• 09/22/16: Three Blind Mayors: The elected leaders of Paris, London, and New York should know better than to downplay the frequency of radical attacks