He adds humor to roadside signs 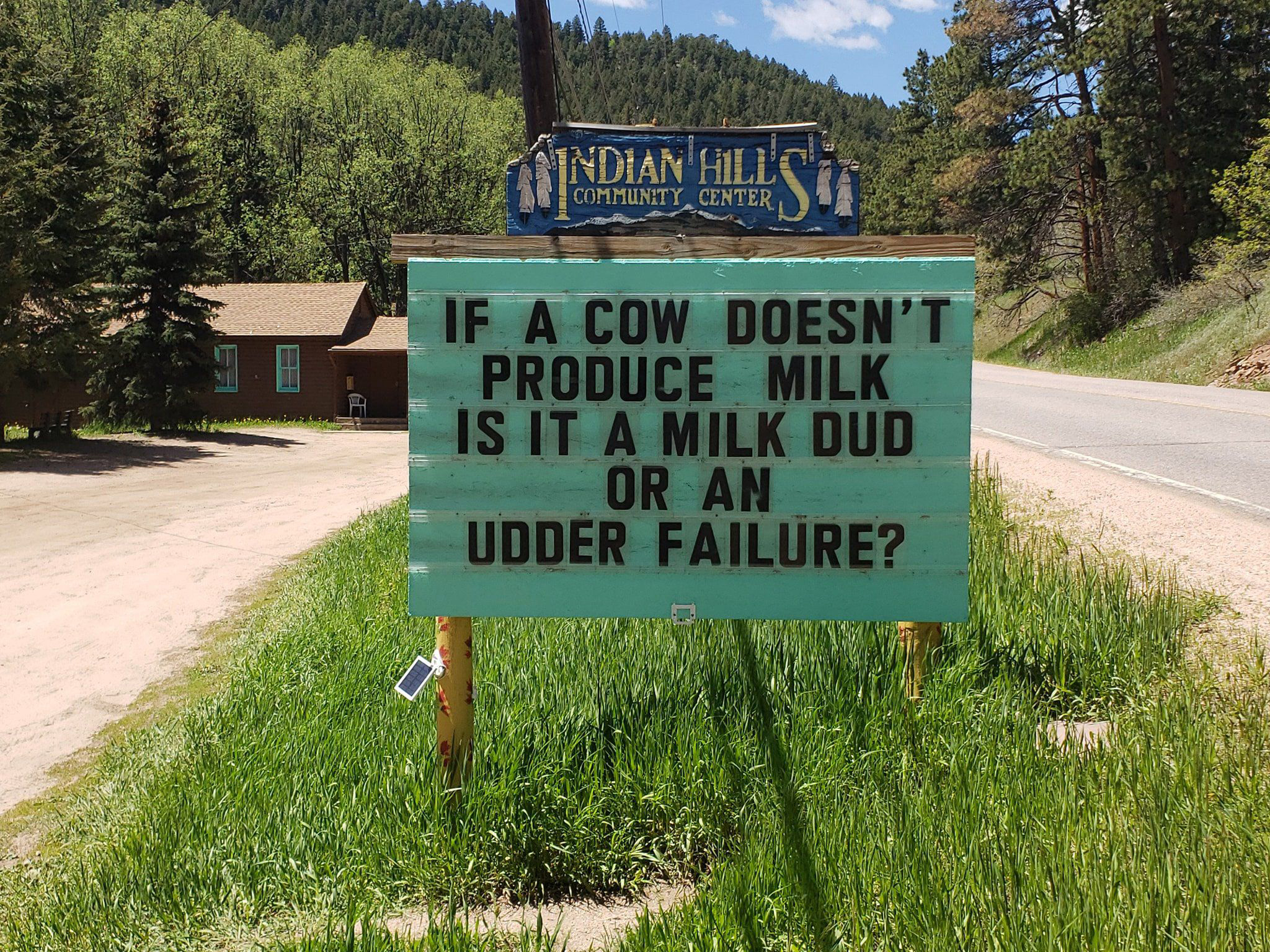 Vince Rozmiarek, who lives in the tiny Colorado town of Indian Hills, has achieved what generations of fathers have striven for: He's become internationally beloved for his dad jokes.

Here's his favorite - "Cows have hooves because they lactose."

It's OK to roll your eyes.

Rozmiarek, 56, started his public life of puns six years ago when he began volunteering for his town's community center and took over managing the center's roadside message board sign that stands along the one highway in town.

At first, he posted strait-laced messages for community members, but then on April Fools' Day 2013, the former stay-at-home dad went for a joke. It ended up a "little haywire," he said.

"There's a heavy police presence in the neighboring town of Morrison, where a lot of speeding tickets are issued," he said. "People hate those speed traps, so on the sign I put, 'Indian Hills annexed by Morrison.' I pranked everyone in town and got a call from the Morrison Police Department an hour later."

Rather than feeling chastened, he was emboldened.


His little sign had gotten so much attention, he thought he might be on to something. Rozmiarek decided to use his platform to try to make people chuckle while driving through Indian Hills, population just over 1,000. He brought mirth to his house for years while his sons were growing up, so why not share his clever quips for all to appreciate?

He had no idea his jokes would go global.

He now has more than 84,000 people from 54 countries following every pun and double entendre that he posts on his Indian Hills Community Sign Facebook page. He puts up photos when he changes his jokes, and each post often gets thousands of likes. His followers post their own puns in response, or just post their gratitude for the laugh. On a recent post, one fan wrote, "This little place saves my life most days."

He posts about two new puns a week:

"Just because you're offended, doesn't mean you're right."

"I call my horse Mayo and sometimes Mayo neighs."

"A bike in town keeps running me over. It's a vicious cycle."

"Obviously, I'm a man with time on my hands," he said. "My three kids are all grown, and people could use something to smile about. So, why not, I thought."

"I came across his signs a few years ago and quickly grew to love the warm, witty humor," said Freitag, 61.

Some of his favorites are witticisms posted by Rozmiarek that advise people to "be careful tonight - one pour decision may lead to another," and "Procrastinators Anonymous meeting is postponed indefinitely."

"Sometimes, (his puns) make you groan, but they always make me smile and often laugh out loud," Freitag said. "We need more people like Vince to make the planet a better place."

Rozmiarek admitted that like any comic, he sometimes pushes the envelope, and not all of his puns go over well. Once in 2015, he posted the phrase, "Old McDonald had OCD - EE II OO."

"Somebody put up a sign at the post office saying that I was making fun of people with disabilities," he said. "I wrote my response on the note and put it back on the bulletin board: 'Do you see how nice and square those letters are? I have OCD, big time!' "

"I wanted him to be able to post his 'offensive' signs for everyone to enjoy," said Kaza. "Vince's puns are absolutely brilliant. He'll text me now and then with new ones and I just die laughing."

Rozmiarek said he gets his plays on words from the Internet, and also from his collection of pun books.

Although he admits to stealing a pun or two, Rozmiarek never puts up something that somebody else has taken credit for. And he's never posted an expression twice.

"I'm looking at puns now for at least an hour a day," he said. "If I didn't steer clear of politics, I'd have an endless supply."

He has posted only one political pun, during the 2016 presidential election. "The problem with political jokes is that they sometimes get elected," it read.

"I made an exception for that one," he said. "Generally, it's important to me to give everyone a reason to laugh, regardless of their political affiliation."


Rozmiarek's cleverness has had an unexpected but welcome effect: People from out of town now come in search of Indian Hills and pull off the road to pose for pictures by his sign.

A woman from Illinois commented on one of his Facebook photos earlier this month, "Love these. I stood in this exact place and took my own picture a few weeks ago. I feel famous!! LOL!!!"

A group of motorcyclists came from Wisconsin to take a picture by another pun: "Ban pre-shredded cheese. Make America grate again."

Of course, the town's favorite pun master was ready with a zinger:

"To the cheesehead bikers who rolled through - looking sharp!" Rozmiarek posted on his sign the following morning.