Can a new group save the Democratic Party for Israel? 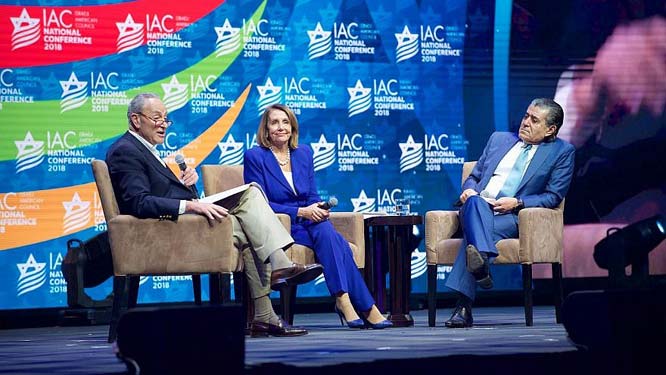 There are already too many Jewish organizations. But if there was ever a need for at least one more, then the Democratic Majority for Israel (DMI) would seem to fill the bill.

The DMI seeks to promote support for Israel among Democrats at a time when the party appears to be drifting away from the pro-Israel orbit. With so many of the most prominent and popular Democrats increasingly hostile to the Jewish state — and with polls showing the party's grassroots also at odds with Israel — the time had come for an effort to retrieve a situation that presents a genuine challenge to a bipartisan pro-Israel consensus. But the question for the group, which says it is well-funded and plans to play a key role in upcoming elections, is whether it can really speak for most Democrats.

A generation or two ago, such a development would have been unimaginable, as Democrats represented the lockstep pro-Israel party. It was Republicans who were divided about support for the Jewish state, while Democrats were the ones that Israel could count on. That changed as Republicans, led by figures like President Ronald Reagan, became increasingly united behind the pro-Israel coalition.

At the same time, many Democrats defected from the pro-Israel camp. The reasons for this are complex, but essentially it boils down to the rise of a left-wing faction that sees the world through an intersectional lens that views the Palestinian war on Israel as morally equivalent to the struggle for civil rights in America. Grassroots activists identified with the Palestinians, not the Israelis.

Many liberal Zionists also began to see the conflict in the Middle East as largely Israel's fault and started to oppose the pro-Israel lobby AIPAC. That led to the creation of groups like J Street that claim to be pro-Israel, but also support pressure on Jerusalem to make concessions its democratically elected government opposes in the name of "saving it from itself."

In recent years, that debate has been supplanted by a new conflict. Openly anti-Zionist organizations like Jewish Voice for Peace and IfNotNow have begun to steal J Street's thunder on the left as those who support Israel's elimination gain visibility and undeserved respectability.

Not surprisingly, that's had a huge impact on the Democratic Party.

When President Obama engaged in a policy of more "daylight" between the United States and Israel, few Democrats protested (while the J Street crowd cheered). And when his administration engaged in appeasement of Iran via a nuclear deal that empowered and enriched a nation dedicated to Israel's destruction, most Democrats, including otherwise stalwart supporters of the Jewish state, loyally went along with him, blaming Israeli Prime Minister Benjamin Netanyahu for a fight that Obama had picked.

Part of the problem is that Jewish Democrats have been focused more on opposing pro-Israel Republicans than on confronting the enemies of the Jewish state within their own ranks. They've disingenuously claimed that Republicans are trying to use Israel as a wedge issue and destroy the bipartisan consensus on the issue when, in fact, the problem the GOP is addressing is one created by the policies of Obama and the defection of the Democrats' left-wing from the ranks of the pro-Israel community.

Last year, large numbers of both the House and Senate Democratic caucuses signed a letter supporting an end to the blockade of Hamas-run Gaza and signaling a more "even-handed" attitude to the conflict. The recent election of people like Rep. Rashida Tlaib (D-Mich.) and Rep. Ilhan Omar (D-Minn.) — members of Congress who have engaged in anti-Semitic invective, as well as support the BDS movement that is steeped in anti-Semitism — has drawn attention to the fact that a significant portion of the Democratic base is not so much indifferent to Israel as downright hostile to it. The fact that Omar and Tlaib have received prominent committee assignments, rather than being punished for anti-Semitic statements, points to which way the wind is blowing on the left.

Polls continue to reveal the way growing numbers of Democrats have abandoned Israel. The latest from the Pew Research Center shows the growing gap between the parties, with 79 percent of Republicans saying they back Israel against the Palestinians versus only 27 percent of Democrats who feel that way.


While Democrats blame U.S. President Donald Trump's historic support for Israel and devotion of white evangelicals to the Jewish state for alienating members of their party, the real problem is the influence of intersectional forces like those who head the Women's March, which is saturated with anti-Semitism, on the left wing of their party.

That's why the new pro-Israel group is desperately needed. Still, there is plenty of reason to worry that opponents of Israel may be more popular among younger Democrats than veteran Democratic strategists like Mark Mellman and Ann Lewis, who has signed up to lead the DMI.

Just as interesting is the fact that J Street has made it clear that it opposes this new group because they view it as an ally of AIPAC and the mainstream pro-Israel community.

The willingness of so many Democrats to buy into false arguments about a bill to ban compliance with discriminatory BDS boycotts of Israel shows that DMI will have its work cut out for it. Yet as long as it can count on the backing of major pro-Israel donors, as well as leading members of the Democratic leadership like House Majority Leader Steny Hoyer (D-Md.) and House Foreign Affairs Committee chairman Rep. Eliot Engel (D-N.Y.), they can have an impact.

For years, Jewish Democrats were too busy blaming pro-Israel Republicans for their problems to face up to the challenge from anti-Zionists on the left. While their opponents are growing in strength and significance, the creation of the DMI shows that pro-Israel Democrats have started to fight for the soul of their party. Whether or not you support the Democrats, everyone who cares about the U.S.-Israel alliance should be praying for their success.