BEATING THE DRUM: As the Covington High School brouhaha reminds us, the media have precast the meaning of every story 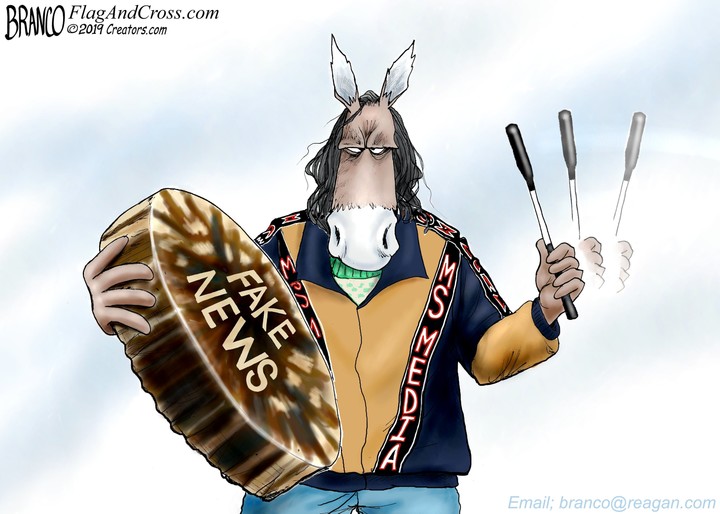 The story of a group of white parochial school kids wearing MAGA hats heaping racist abuse on a dignified Native American Vietnam veteran sparked an inferno of indignation across mass and social media.


The incident was depicted as an iconic example of toxic white smugness, as well as a recapitulation of the history of European conquest of the American continent from its earlier inhabitants. Respected journalists and public figures responded to the images of a "smirking" teenager with calls for violence against him, his classmates, and their parents. Even after the story was debunked, many commenters kept their outrage burning, and pointed to photos taken years before, involving none of the participants in the recent event, as evidence that the school — Covington Catholic High School, in Park Hills, Kentucky — is infected by a virulent racism that can be cured only by closing it, razing it, and sowing salt in the ground.


Oddly, the media had learned nothing from its previous rush to judgment. Just days before the Covington story broke, the national media gave blanket coverage to a BuzzFeed report that President Trump ordered his lawyer to perjure himself regarding Trump's business dealings in Russia. Commentary became so fervent, with members of Congress talking on Twitter of preparing articles of impeachment, that the special counsel broke his two-year silence to refute the report.


Poorly sourced, slanted reporting has become the new standard among prestige media. Three weeks ago, a little girl, black, was shot and killed in a Houston parking lot; initial reports that the shooter was white turned a local police item into national news. The New York Times ran stories on the case for days, exploring the implications of targeted, race-based murder in an age of intolerance. When it emerged that the child was killed by two black gang members gunning for their enemies, coverage of the story ceased.

Reporters have always made errors, but mistakes should occur independent of ideology. What we're seeing instead is a pattern — media miscues always occur in the same direction, in favor of the liberal perspective. Over the last two years, countless "bombshell" reports have signaled grave danger for the Trump presidency, up to and including impeachment or resignation. Trump's son got an early look at the Wikileaks pages; Anthony Scaramucci was tied to a dodgy Russian hedge fund; Michael Cohen met Russians in Prague; Paul Manafort met Julian Assange in the Ecuadorian embassy in London; James Comey would testify that Trump was under investigation; and so on. As outrage ebbs from each discredited story, it is relegated to the memory hole in time for the next one to emerge.


Ever since Trump's arrival on the national stage, the media have devoted themselves to destroying him, and, by extension, the ideologies that supposedly account for his popularity — white supremacy and toxic masculinity. Major media outlets have shed any pretense to rigor or probity, even as they make ostentatious shows of "fact-checking" the president's statements.


Obsession with white privilege focuses maximal scrutiny on any incident that tracks with the right narrative. Over the last year, we've seen a spate of cellphone videos capturing petty disputes amplified across social media and reported in the national media — as long as the footage depicts a white person complaining to or about a black person doing something relatively minor. Whether the incidents in question have anything to do with race is unimportant. Pushing the narrative that Trump has ignited a firestorm of white racism across the country requires a continual flow of stories making that point, regardless of accuracy or context. The relentless search for Trumpian villainy has precast the meaning of every story. All that remains is to fill in the blanks.


Previously:
• 12/04/18: Charged With Discrimination: Pols moves to ban some 'cashless' establishments, arguing that they are racist
• 11/19/18: The deep ties between the depraved cult leader Jim Jones and prominent Democratic politicians
• 10/05/18: 'Globalist' Doesn't Mean 'Jew'
• 09/12/17: Mayor de Bolshevik: Will his dangerous dogma be embraced by others on America's far-left?
• 08/21/17: Shadow President?
• 08/15/17: Between Chaos and Competence: The Trump administration has been remarkably substantive, but its two competing narratives can't coexist forever
• 09/22/16: Three Blind Mayors: The elected leaders of Paris, London, and New York should know better than to downplay the frequency of radical attacks