Charlie and the Jews One Year Later 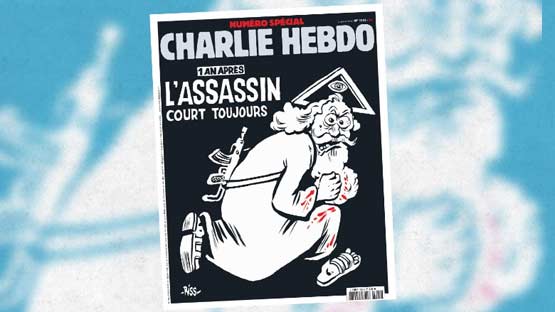 This week is the anniversary of the attack on the offices of the satirical magazine Charlie Hebdo as well as of the assault on a Parisian kosher market by members of the same group of Islamist terrorists. The publication is marking the occasion by issuing a special edition that is reportedly full of its trademark profanity and blasphemy mocking religion in general, and the faith of those who slaughtered 11 of the magazine's staffers on January 7, 2015, in particular. But one doesn't have to agree with everything in the 32-page cartoon-filled polemic to accept that two assertions it makes are absolutely true. One is that, as its cover states, "the assassin is still out there." The other is that, as its editor writes, the world is still waiting for an explanation from its leaders as to why a run-of-the-mill Jewish target - the Hyper Cacher supermarket - was singled out along with the Hebdo staff.

The assassin in question doesn't refer to the Islamist cell that carried out the attacks since all of them were eventually killed. Rather it refers to the threat of radical Islamist terrorism, which is still flourishing in the form of an ISIS caliphate that controls much of Syria and Iraq as well as the Hamas and Hezbollah groups in Gaza and Lebanon, not to mention their Iranian sponsors. The Paris attacks in November carried out by ISIS and the mass shooting in San Bernardino last month illustrated that the Charlie Hebdo massacre wasn't a singular event but a warning that a war on the West was just beginning.

But the article by editor Gerard Biard in which he mentions the question about the Jews highlights another key element of the story. By refusing to call the enemy by its right name and pretending that religion doesn't play a key role in the threat, the United States is undermining the effort to roll back the Islamist tide. But by refusing to understand that the Jews are the canary in the coalmine, the Obama administration is also signaling to the world that it isn't serious about fighting the terrorists and what they stand for. Far from being tangential to the question of how to beat Islamist terror, the fate of the Jews is integral to the outcome.

It's worth recalling that in his initial reaction to the Hebdo attacks and in subsequent comments about the killings at the Hyper Cacher, President Obama demonstrated his unwillingness to address the issue of anti-Semitism. By first ignoring the anti-Semitic nature of the assault and then later still referring to the terrorists' decision to target the market as "random," the president showed that he had a blind spot when it came to Jew hatred.

This is critical since, as Biard notes, the Islamist war against the Jews isn't so much symbolic as it is part of the worldview that Jews represent the West. But since, as Biard writes, Westerners are so used to Jews being killed, they don't stop and think about why it was important that a run-of-the-mill kosher market would be singled out along with a magazine that specifically sought to offend Muslims.

A rising tide of anti-Semitism has made life difficult for Jews even in the capitals of Europe. But while elites and leftists have formed a strange alliance with Muslim immigrants to try to isolate Israel and stigmatize its Jewish supporters, they fail to understand that Islamist killers get to decide who is and is not a Jew. As Biard notes, the November mass attacks in Paris demonstrated that "the executioner had showed us that he had decided we were all Jewish."

That's an astute observation that most Europeans and even many Americans still haven't absorbed. They continue to treat the daily terrorism against Jews in Israel such as the New Year's Day shooting in Tel Aviv as somehow separate from the war against the West that we observed in Paris and San Bernardino. They think that if Islamists slaughter Jews it has no meaning for the West's own battle for survival against a fanatic foe. That's a critical mistake.

One year after Charlie Hebdo, France is fighting back against the enemy within its own borders. The French government has initiated extraordinary measures aimed at cracking down on Islamist targets to the point where liberals, like those that write the New York Times editorial page, are crying foul. But this determination not to be caught napping again is admirable and ought to be applauded by Americans.

A willingness to address the core element of Islamist theology and its relative popularity across the Muslim world doesn't require the West to wage war on all Muslims. It's worth noting again that a Muslim policeman was killed along with the Hebdo editors and it was a Muslim who helped save some Jewish shoppers at the Hyper Cacher. But neither can we ignore the power of Islamist ideology or fail to understand that its popularity is driven by a sense that it is winning rather than as a reaction to Western counterattacks, let alone the blasphemy of Charlie Hebdo or the utterances of Donald Trump.

But so long as the West thinks that the Islamist war on Israel and Jews is separate from the one they seek to wage against American and Europe it will fail to adequately defend itself. An America that believes it can insulate itself from more attacks by making deals with a terror-supporting Iranian regime or by "leading from behind" against ISIS while ignoring the anti-Semitism at the heart of its enemy's faith isn't one that can defeat the forces of terror that threatens the liberties of Americans, Christian, Jew or Muslim.