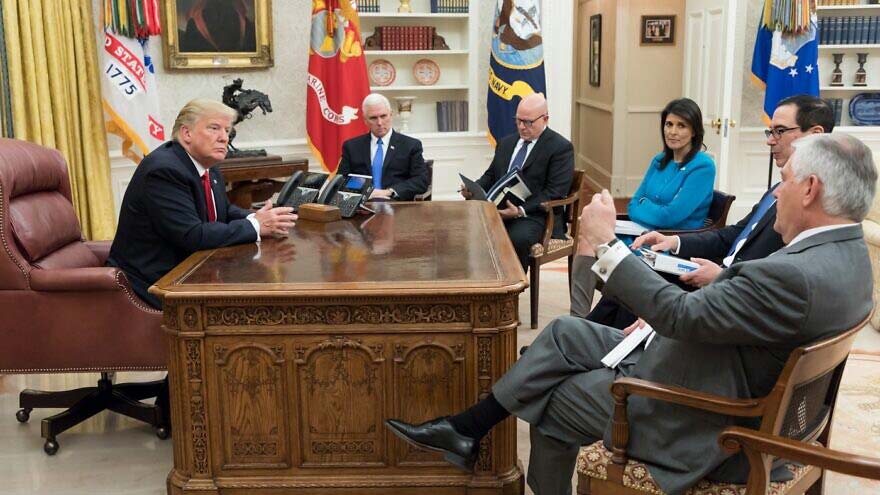 Americans and viewers around the world have been transfixed by the public hearings by the U.S. House of Representatives on the impeachment of President Donald Trump.

At the center of the proceedings was the testimony of two veteran officials: one a State Department veteran, and the other a career soldier and diplomat. The question of whether or not they helped the Democrats who are stage-managing the hearings to make their case that Trump committed an impeachable offense when he requested that Ukraine look into what he claimed was alleged corruption involving former Vice President Joe Biden is a matter of partisan dispute. Still, there's no doubt that their testimony reflected the bitter antagonism felt by many, if not most, of those in the Foreign Service and other long-serving members of the federal bureaucracy.

For those who are seeking to impeach Trump by any means necessary, these veteran federal employees lie at the heart and soul of the government, providing the nation with dedicated service informed by their experience, wisdom and patriotism. The fact that Trump routinely ignores their advice and runs roughshod over their priorities and sensibilities is seen by his detractors as a disgrace. The reaction to their complaints — in the form of whistleblower reports or egregious leaks of information to the press — has been applause and reverential media coverage.

Whether or not you think that the Trump's actions towards Ukraine rise to the level of an impeachable crime, the narrative seems primarily rooted in the disgust on the part of the Foreign Service and other federal employees about Trump's utter disregard for their counsel.

But leaving aside issues surrounding Trump's requests to Ukraine as being inappropriate or actually criminal, there is a broader question to be posed with respect to the complaints of those who believe that the core matter in this dispute is a president who neither respects nor listens to the experts.

That's why the release this week of a memoir by Nikki Haley, the former U.S Ambassador to the United Nations, is so timely.

Haley's book, With All Due Respect, made headlines because of its revelations about the infighting going inside the Trump administration.

According to Haley, former White House Chief of Staff John Kelly and former Secretary of State Rex Tillerson tried to draw her into what sounds like a conspiracy to undermine Trump. The substance of her accusations is that both men considered their duty to be not so much to advise the president and then implement his decisions, but to manipulate and thwart him so as to substitute their judgment — and that of the federal bureaucracy and foreign-policy establishment they trusted — for his.

While the protests of the foreign service about Trump pursuing his own agenda on Ukraine seems to resonate with many Americans who already dislike the president, Haley provides us with a concrete example of a similar dispute that puts this problem in perspective.

She devotes a chapter of her book to U.S.-Israel relationship called "Changing the Culture." In it, she details how resistant the foreign-policy professionals were to Trump's strategies, in which he sought to end President Barack Obama's pursuit of "daylight" between the United States and the Jewish state.

A principle bone of contention was Trump's determination to recognize Jerusalem as Israel's capital and move the U.S. embassy there from Tel Aviv.

The resistance to this idea from both the State Department and veteran government officials like Kelly was ferocious. The only ones in the government to support Trump's intentions were Haley, Vice President Mike Pence and U.S. Ambassador to Israel David Friedman.

The opponents thought they could stall, spin and otherwise stymie Trump with bureaucratic delays. But he stubbornly held course and insisted on implementing the move. While the establishment predicted that the world would be set on fire by this decision, Trump and his supporters were proven right when it was met with little protest.

The same thing happened with Trump's decision to pull the United States out of the 2015 Iran nuclear deal.

What Haley witnessed was what some on the right have come to term "the deep state." That's a sinister, conspiratorial term, though it has been embraced by some on the left who argue that the civil service was put in place precisely to stop someone like Trump from governing as he wishes.

Those who are cheering the "resisters" within the government and the so-called "adults" with the administration for doing everything in their power to stop Trump from carrying out the policies he ran on feel that any means justifies the end of when it comes to this president. The Ukraine story — and the possibility that it might sink Trump — has endeared the bureaucracy to liberals, even though they would have regarded such actions as illegitimate if a similar group of government employees had sought to stop President Barack Obama from, say, carrying out secret negotiations with Iran, in the same manner as they have sandbagged Trump on Israel, Iran, Ukraine and other issues.

Whatever you may think about his presidency, Trump was right and the "adults" were wrong about Jerusalem and other Israel-related issues. The same is true about Iran.

This ought to remind even those who don't like the president that policy decisions should be left to the commander in chief elected by American voters. Anything else is both illegitimate and undemocratic.

Trump fought the "deep state" on Israel and won. Had the bureaucrats prevailed, it wouldn't have been a victory for democracy. Instead, it would have been a triumph for establishment figures that have been wrong about the Middle East for generations. Whatever you may think about Trump, allowing them to veto a president is an invitation to disaster.