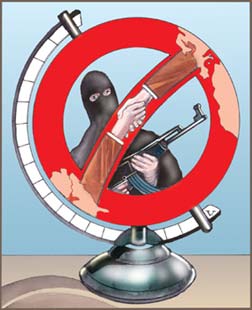 Seeking to make sense of this week's horrific terrorist attack on a Jerusalem synagogue, the New York Times stumbled across an unfortunate truth about the conflict between Israel and the Palestinians. Quoting writer Yossi Klein Halevi's characterization of the violence in the headline of its article on the aftermath of the atrocity, it noted that in this "war of neighbors," differences are not negotiable.

But while Times Jerusalem bureau chief Jodi Rudoren intended this surprisingly sober analysis to apply only to the issue of Jerusalem's Temple Mount or perhaps the city itself, were she to think more seriously about the subject, she would be forced to conclude that the same phrase applies to the entire conflict between Jews and Arabs over this small country.

The infusion of religion into what all too many observers believe is a dispute over land and borders scares many of those who comment on the Middle East.

Having spent the last few decades attempting to argue that peace could be achieved between Israel and the Palestinians if only the Jewish state were to give away more or all of the land it took possession of during the 1967 Six-Day War, those committed to this myth seek to divest the discussion about the path to peace of the absolutes of faith that make compromise impossible.

Seen from that perspective, the dispute about the Temple Mount is one in which both sides can, as Rudoren does in her piece, be portrayed as being driven by religious zealots intent on blowing up an already combustible situation.

But while it is true that a minority of Jews would like to alter the status quo on the Temple Mount to make it place where both faiths can be freely observed (Jews currently may not pray on the Mount, a stand endorsed by Prime Minister Netanyahu), the hate and incitement that leads inevitably to the kind of bloody slaughter witnessed in a Har Nof synagogue where four Jews were murdered this week is not a function of a few isolated zealots or a twisted interpretation of Islam.

Rather it is a product of mainstream Palestinian political culture in which religious symbols such as the imagined peril to the mosques on the Mount have been employed by generations of Palestinian leaders to whip up hatred for Jews.

The purpose is not to defend the mosques or Arab claims to Jerusalem but to deny the right of Jews to life, sovereignty, or self-defense in any part of the country.

In order to understand the current spate of murders of Jews by Palestinians and why so many took to the streets of Gaza and West Bank cities to celebrate the bloody attack on Jews at prayer, we have to leave aside the clichés about cycles of violence and even-handed blame assessment and come face to face with the reality of Palestinian nationalism.

From its inception early in the 20th century, Palestinian national identity has been inextricably linked to a war against Zionism and the growing Jewish presence in the country.

Zionist leaders initially hoped the conflict could be solved through economic cooperation and then embraced territorial compromise as the panacea. But no solution has worked because the real focus of the dispute isn't about land or a division of economic benefits but something far more fundamental that isn't, as the Times said, "negotiable."

Palestinians celebrated this latest horror, as they have been lauding every other recent terror attack and all those that preceded it throughout the last few decades. They did so not because Israel has failed to restrain Jewish extremists (it has done so) but because the basic elements of the conflict are not about details such as where Jews may or may not live in Jerusalem or where they may pray. Removing the hundreds of thousands of Jews who live in those parts of the city that Jordan illegally occupied between 1949 and 1967—"East Jerusalem"—won't end the conflict any more than previous Israeli retreats or the several Israeli offers of statehood and independence for the Palestinians (that would have given them not only almost all the West Bank but a large share of Jerusalem) satisfied Palestinian opinion or its leadership.

Once you understand that, it's easy to see that the obstacle to peace isn't specific Israeli policies but the Jewish refusal to be evicted from their ancient homeland or to defend their hold on it. Indeed, rather than trying to interpret Palestinian extremism through the contemporary prism of the spread of ISIS-like fundamentalism, the current violence is better understood as just the latest iteration of the same virus of intolerance that has fueled the war on Israel for many decades.

Rudoren and some of her sources are wrong. The scheduling of prayer services ore entry to the Temple Mount is a negotiable issue if both sides were willing to view it as not being a zero-sum game.

So, too, is the question about where the border of a Palestinian state that recognized the legitimacy of a Jewish state next door would be if parts of Jerusalem were included inside its borders. Nor is the red herring of municipal services to east Jerusalem Arabs, which Rudoren also speciously raised as a potential cause for terrorism, beyond discussion. That is especially true since most residents of Arab neighborhoods are, despite their complaints about Israelis, wary of being lumped in with the other victims of Mahmoud Abbas's West Bank kleptocracy.

But what isn't negotiable is the demand heard on the Palestinian streets and in the official media of the Palestinian Authority and Hamas's independent state in all but name in Gaza for Israel's destruction. The praise being heard for this latest instance of "resistance to the occupation" isn't about Jerusalem's municipal boundary but the "occupation" of any part of the country—including all the territory that was under Israeli control prior to June 1967.

That is what isn't negotiable and won't be until a sea change in Palestinian political culture occurs that will make the shocking pro-terror demonstrations impossible. Until the Palestinians give up their dreams of Israel's destruction, more than Jerusalem will remain non-negotiable.

And that is a reality that an American administration and its media cheering section at the Times that has falsely blamed Israel for the failure to achieve peace must also learn to take into account if they are to understand what is really happening in the region.