The woman who showed how Americans can succeed at the UN 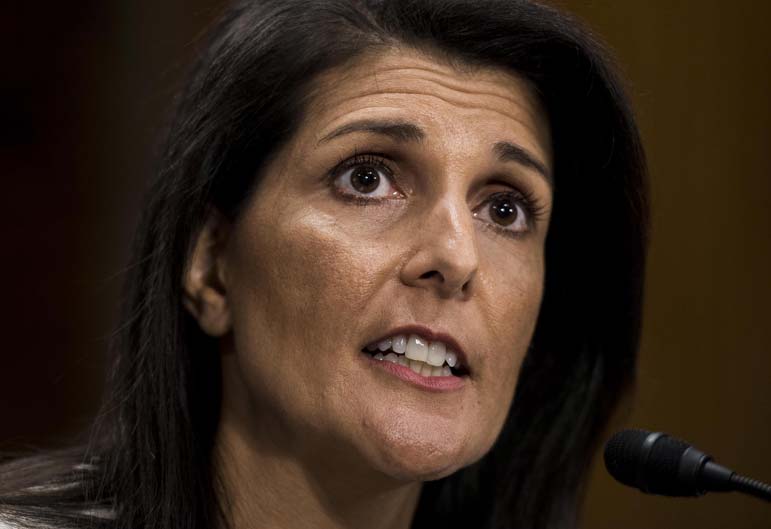 The resignation of U.S. Ambassador to the United Nations Nikki Haley took the political world by surprise, but it's likely that no one is more disappointed than supporters of Israel. Haley wasn't just a smart and assertive voice for America at the world body. She was a champion for the Jewish state, refusing to countenance the routine discrimination against Israel that was either blandly accepted or even encouraged—as it was during the last days of the Obama administration—by many of her predecessors.

Most of those sent to represent the United States at the United Nations have sought to both assimilate into their environment and to adjust their foreign-policy message to fit in with the culture of a world body where America and Israel are generally despised. It's become a place where everyone pretends that Third World dictators, theocrats and terrorists are respected statesmen.

This theory of diplomacy is epitomized by former Secretary of State John Kerry, the architect of the 2015 Iran nuclear deal, who is, according to Politico, apparently thinking of running (again) for president in 2020.

Kerry, like his former boss, Barack Obama, doesn't just believe in multilateral institutions, he hitched U.S. foreign policy to the notion that America's role in the world was not to listen and cooperate, but to also apologize and appease. He paid lip service to Western values, rather than to confront America's enemies and call out those who have perverted international institutions into cesspools of anti-Semitism. The result was not merely a failed attempt to ingratiate Muslim extremists, but retreats in Iraq and Syria, followed by atrocities, and then a nuclear pact that enriched and empowered an Iranian regime seeking regional hegemony.

Though Samantha Power—Obama's U.N. ambassador—has a reputation as a fighter for human rights and opponent of genocide—she wound up doing little to change the ways of the United Nations or oppose anti-Israel prejudice.

By contrast, Haley's tenure was in the tradition of a select few U.S. ambassadors that preferred calling things by their right names, rather than ignoring and enabling corruption and prejudice. Like Daniel Patrick Moynihan, Jeanne Kirkpatrick and John Bolton (who now serves as U.S. President Donald Trump's National Security Advisor), Haley stood with Israel when the rest of the world was silent or complicit in the unfair treatment it got at the world body.

As a general rule, that is the sort of behavior that makes few friends for U.S. ambassadors, as well as bringing down upon them the opprobrium of the foreign-policy establishment.

Haley was undaunted by the abuse of the "experts" who opposed her stands, in addition to the decisions of the Trump administration to move the U.S. embassy in Israel from Tel Aviv to Jerusalem, and to withdraw from the Iran deal while re-imposing sanctions on a rogue theocratic and terrorist regime.

But there was more to Haley's tenure than just that. She didn't just talk back to terrorists and dictators, telling them that she would be "taking names" of countries that get U.S. aid but oppose America when it comes time to vote at the world body.

She also worked hard at persuading and charming—at least, as far as it is possible to persuade and charm the diplomatic corps—other nations to back the United States. She didn't just decry the United Nations. She engaged in successful attempts to reform its budget and to pass resolutions that assisted U.S. efforts to prevent nuclear proliferation. In other words, she didn't arrive in New York to kowtow to the establishment or to engage in war with its members. Her goal was to change the tone at the United Nations, even as she held it accountable.

It was a unique combination of toughness and political skills that none of her predecessors possessed.

As such, she wasn't just a key member of a Trump foreign-policy team that pushed hard for a sensible reboot on Iran and stood by Israel. She was a unique figure in that she had earned the respect even of Trump foes, who generally consider anyone who works in the administration to be beyond redemption.


Haley has a bright political future. And thanks to her ties to the GOP establishment and her ability to stay on Trump's good side, it's likely that at some point she will be a presidential hopeful who will be able to point to her time at the United Nations as a powerful argument for her candidacy. But that's something to consider in the future after the 2020 election, no matter what happens to Trump.

What is important to consider now about her service is that she managed to do something that no other U.N. ambassador accomplished: to stand up for American interests—and those of its crucial ally, Israel—while also making friends. That's something that Bolton, who was as forthright as Haley but who played the role of a bull in a china shop, didn't manage to do during his time at the United Nations. As such, it's no wonder that reportedly Haley and Bolton clashed behind the scenes. The idea that the only choice Americans have on the diplomatic stage is to be either a Kerry or a Bolton was always a false one.

It's a shame that Haley was apparently determined not to hang on longer, as her many admirers, including those in the pro-Israel community, would have liked. But this unlikely diplomatic star—she had no foreign-policy experience before Trump appointed her, despite Haley's bitterly opposing his candidacy during the 2016 Republican primaries—has made a mark that will ensure she is remembered even if she never runs for president.

Those who follow Haley will need to match her diplomatic chops, as well as her courage. Let's hope that they'll be as steadfast in their determination as she was to bear witness against anti-Israel and anti-American hate in the diplomatic circus that is the United Nations.